Reflecting on a March Madness for the ages 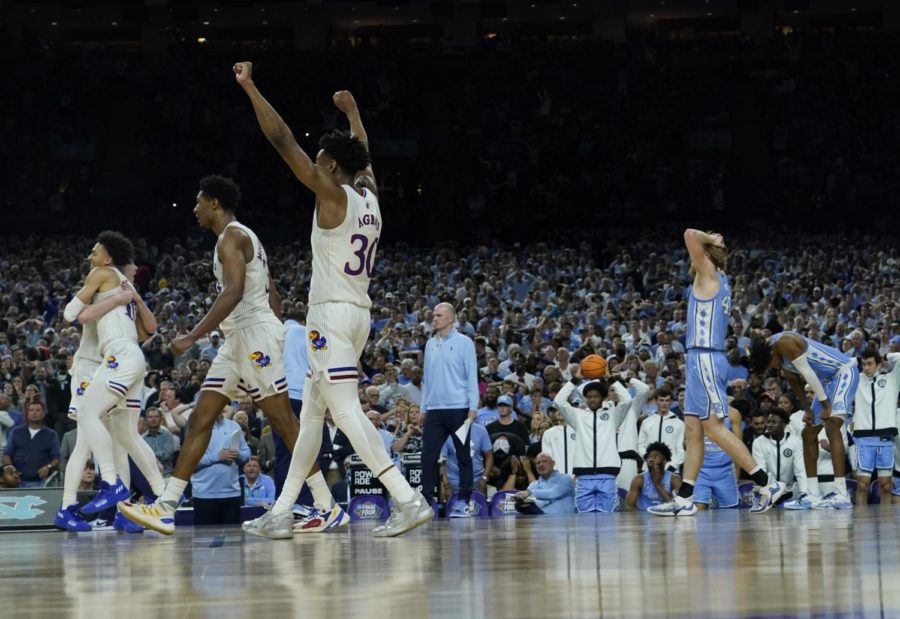 Kevin Harlan said it best at the outset of the 2016 NCAA Tournament.

“Welcome to the Big Dance. This tournament is so. Much. Fun.”

Boy was it ever. It’s been three years since college basketball fans had seen a normal version of March Madness. The 2020 postseason was canceled. Last year, fans were limited in a bubble environment. It just wasn’t the same as what we were accustomed to. At long last, 14 different arenas across the country roared to life as 68 teams vied for the national title.

For all the familiarity that returned, one thing was still missing: buzzer beaters. The closest we got to a true win-at-the-wire was Paul Atkinson’s layup with 1.4 seconds left to give Notre Dame a First Four win over Rutgers (that shot did come in double overtime, for what it’s worth).

But the absence of one of the most exciting aspects of the game doesn’t mean there wasn’t madness. Six games went to overtime. Seventeen games were decided by five points or less. Drew Petersen did his best Gordon Hayward impression, barely missing a half-court shot and failing to beat Miami at the buzzer. Arizona got past TCU in the second round thanks to Bennedict Mathurin’s heroics. North Carolina shocked Duke in the Final Four (more on that later).

The greatest month-long sporting event in the world has no baseline for excitement or anticipation. It does not under promise because it can’t. But it always delivers, often exceeding our expectations year after year.

Alright, time to reminisce on what made this tournament so much fun.

Will Gonzaga ever catch lightning in a bottle? The Zags have made 23 straight tournament appearances, including seven straight Sweet 16 berths. They played in the national championship in 2017 and 2022. Mark Few’s program has nothing left to prove.

That 2017 team was absolutely loaded, with stars like Zach Collins, Josh Perkins, Nigel Williams-Goss and Rui Hachimura. Since then, five-star prospects like Jalen Suggs and Chet Holmgren have taken the program to new heights. But after a disappointing exit in the Sweet 16, those in Spokane have to wonder if the Zags will ever add a national championship trophy to the case.

On the flip side, the Arkansas Razorbacks continue to ascend the college basketball ranks under Eric Musselman. In beating Gonzaga, they captured their first ever win over a number one-seed. How fitting that it was the top overall seed. They also clinched back-to-back Elite Eights for the first time since 1994-1995. The Hogs advanced to the national championship both years, winning it all in ‘94 under Nolan Richardson.

Within the span of a month, the Razorbacks lost five of six games, leading many to discount them from the national conversation. With a win over Gonzaga secured, Musselman had a message for the haters.

“We believed. Nobody else did. We read everything, I’m telling you. We put it up on our screen, every single meal. Thank you to everybody that said we had no chance!”

Musselman coached the Golden State Warriors from 2002-2004. Not only did he advance to the West regional in San Francisco, but Arkansas got a hard-fought win in the building of the team he used to coach.

Okay, it’s time to talk about this year’s darling, the St. Peter’s Peacocks. On the surface, they were the third 15-seed ever to advance to the Sweet 16, and the first to make it to the Elite Eight. Florida Gulf Coast had “Dunk City” in 2012. Oral Roberts had established stars in Max Abmas and Kevin Obanor last year. So what made the Peacocks special?

Not only is he the team’s third-leading scorer, but the mustached wonder from Oradell, New Jersey quickly became a cult hero because of his hair. He averaged 14.3 points in the Peacocks’ three wins, but established himself with a 20-point performance in their first round upset over Kentucky. Speaking of that overtime thriller…

It was easily one of the biggest upsets in college basketball history. UMBC was obviously special as the first 16 seed to beat a 1 seed. Norfolk St. was the biggest underdog by point spread (+22 against Missouri in 2012).

But the talking point in St. Peters’ matchup with Kentucky was the disparity in athletic budgets. According to college basketball blog Three Man Weave, Kentucky had the second largest men’s basketball budget in the 2021-22 season at $20.2 million. St. Peter’s expenditures? Just $1.6 million, one twelfth that of the Wildcats. Multiple Kentucky assistants make more than Peacocks head coach Shaheen Holloway. Several of Holloway’s assistants are unpaid. Factoring in the location (Jersey City) and student body (undergraduate enrollment of 2,400), many have called the head coaching job the hardest in the Metro Atlantic Athletic Conference. Almost nobody expected the outcome that we got. But hey, that’s why the games are played.

To put it in perspective, the Houston Rockets currently have the worst record in the NBA. They probably wouldn’t beat Giannis Antetokounmpo’s Milwaukee Bucks in a seven-game series, but they have a better chance at winning a single contest.

After the upset, Holloway was asked an interesting question: Was he nervous at any point during the game? His response was an all-timer.

“For what? It’s basketball.”

Anyone that is ingrained in the game knows that once the ball is rolled out, all nerves vanish as instinct takes over. And that was Holloway’s demeanor throughout the Peacocks’ postseason run. Whenever the cameras found him, he was pacing the sideline with his head bowed and hands in his pockets, the personification of a blue-collar work ethic in his hometown of Queens. Consider this: he became so popular over the course of two weeks that he had to turn off his phone because of the flood of support messages and ticket requests.

The Peacocks went on to defeat a mid-major powerhouse in Murray State before facing off with Purdue. A second top-40 men’s basketball budget was no problem for the Peacocks, mostly because Boilermakers coach Matt Painter chose not to use his overwhelming size advantage in Trevion Williams and Zach Edey. Again, why be nervous? It’s just basketball.

“I got a bunch of guys that just play basketball and have fun,” Holloway said after the game.

Despite falling to North Carolina, St. Peter’s captured the hearts of America, and Shaheen Holloway was rewarded with the head job at his alma mater, Seton Hall. Coincidentally, the Pirates were the last team from New Jersey to make the Sweet Sixteen before the Peacocks.

The largest individual storyline was easily the final tournament appearance for Mike Krzyzewski. Four of the five Blue Devils’ games couldn’t have been more dramatic. Trailing 70-65 in the second round, they outscored Michigan State 20-6 over the final five minutes. Against Texas Tech in the Sweet 16, the Blue Devils shot 70% in the second half, not missing a field goal in the final 8:25 en route to a 78-73 win.

The gravity of his final season was not lost on ‘Coach K’, but it did affect his approach. Krzyzewski listened to his players, switching to a zone defense that was seldom used during the season. During halftime, which is extended by five minutes in the tournament, he would open up the floor and converse with his players instead of simply prepping for the second half.

“They were a close team before the NCAA Tournament. But these last four games, they’ve been terrific,” Krzyzewski said after an Elite Eight win over Arkansas, his 101st NCAA Tournament win.

With his thirteenth Final Four appearance, Krzyzewski passed John Wooden for the most all-time by a head coach.

For all the chaos of the first two weekends, we were rewarded with a Final Four consisting of the bluest of bloods in the sport. It gave us the biggest collection of names since 2015. North Carolina has the most appearances in history. Krzyzewski now has the most appearances by a coach. Kansas is fifth on the all-time appearance list with 16 (not to mention 56 conference regular season championships). Villanova appeared in their third Final Four in the past six seasons, having won the title each of their past two trips. The four teams have combined for 8 of the past 14 titles dating back to Kansas’ title in 2008.

Villanova and Kansas were the undercard, almost an afterthought. The Jayhawks got payback for the 2018 Final Four, where Villanova made 18 threes in a 95-79 win. Kansas ran out to a 10-0 lead and never let off the gas, dominating from tip to finish on their way to a tenth national championship game in program history.

In the nightcap, the stakes couldn’t have been higher. The first NCAA Tournament meeting between Duke and North Carolina. Coach K’s final season. Ultimate bragging rights in the rivalry. With so much hype leading up to Saturday night, the game almost didn’t need to be played.

But the action on the court gave us an instant classic. Neither team led by more than seven. Haymakers were thrown and answered with equal magnitude. Caleb Love made the biggest shot in New Orleans since Michael Jordan’s jumper to beat Georgetown (40 years later, to boot).

Escaping with an 81-77 win, Carolina gave Krzyzewski the three most significant losses of his career: his first loss at Duke in 1980, a loss in his final home game at Cameron Indoor Stadium, and his final career loss. How poetic.

“When you’re in the arena, you’re either going to come out feeling great or you’re going to feel agony. That’s the thing that I’ll miss,” Krzyzewski said, reflecting on his career.

In reaching the final game of the season, the Tar Heels did not play like the 8 seed they were given. They secured the largest 8-versus-9 margin of victory ever (32 points). At one point, they led Baylor by 25 and would have blown them out if not for Brady Manek’s ejection (and spotty officiating). They effectively closed out last year’s Cinderella in UCLA, then dominated this year’s Cinderella (St. Peter’s) from tip to finish. There was absolutely no surprise that they beat Duke.

Coincidentally, the title game was a meeting of the two head coaches that replaced Roy Williams at his two former schools. Krzyzewski may have been the centerpiece in New Orleans, but Williams stole the show one year after his own retirement.

Kansas and North Carolina had previously met in the 1957 title game, a triple overtime thriller that ended 54-53 in favor of North Carolina. Although I wasn’t alive to witness the ‘57 title bout, I’d say the 2022 version was just as good.

After falling behind 9-3, Hubert Davis wasn’t happy with his team. He gave an impassioned interview when the game was tied at 22. North Carolina went on an 18-3 run after his comments to take a 40-25 halftime lead. Armando Bacot, effectively playing on one leg, reached a double-double in the first half alone. The Tar Heel big man tallied six double-doubles in the tournament, becoming the first player ever to do so.

“I was upset at some of the suggestions that we wouldn’t be excited about playing in the national championship game. That’s our goal,” Davis said.

What happened in the second half was nothing short of the Jayhawks’ “Danny and the Miracles” 1988 title run. While outscoring North Carolina 47-29, Kansas orchestrated the largest second-half comeback in title game history, ending a similarly spectacular tournament by the Tar Heels.

“We overcome the odds. We overcome adversity. We’re just built for this,” David McCormack said as confetti rained down on the court.

So what truly makes the tournament everything we could possibly ask for and more? It’s knowing the unexpected will happen, but not knowing when, where or who. It’s the amount of pure coincidence (see the above examples). It’s facing the reality that one team has to win, and the other has to lose. And being able to watch the games as an unbiased fan only amplifies the excitement and reactions to the biggest moments.

We thank you, March Madness, for the greatest three weeks of the year. We’ll see you in 11 months.