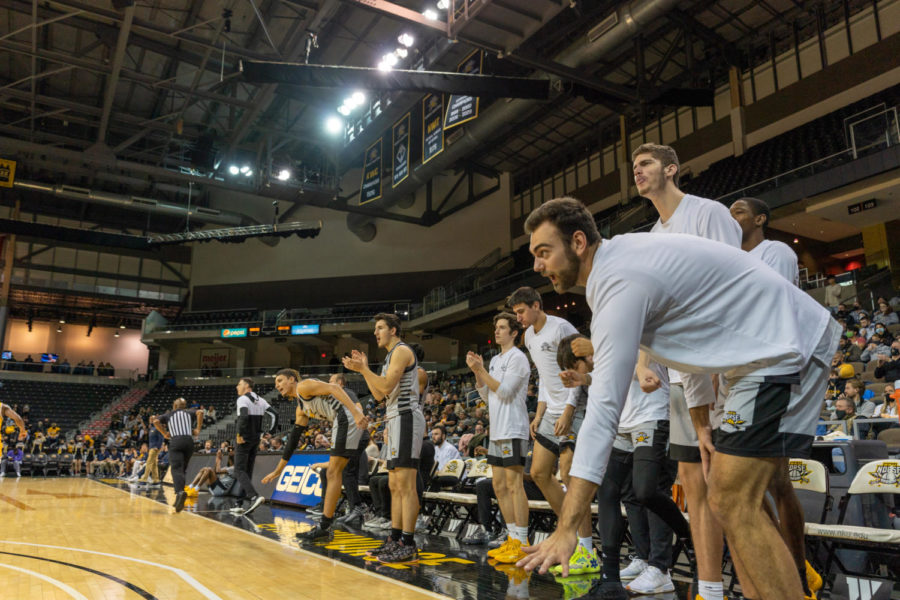 A Division I college basketball walk-on is, in many ways, comparable to a pawn in chess. They may not make up half of the roster, but their numbers in the sport are many. Both entities have minimal impact; a pawn can only move one square at a time, and a walk-on is fortunate to see one minute of playing time, even in a blow-out. Both are seen as supporting cast. But for David Wassler, a senior walk-on for the NKU men’s basketball team, his role is crystal clear.

Most games, Wassler can be seen at the end of the bench, sitting among fellow teammates and team athletic trainer Ben Folz. His main focus is on the court, studying and dissecting each play (more on that later). Wassler also acts as a cheerleader, reacting to every basket, whistle and clutch play.

Should a pawn attempt to sneak past the opposing defense and take down the king, the path is not easy. Similarly, Wassler’s basketball journey has provided many twists and turns.

His love for the sport began in kindergarten. He was always the tallest in his grade in middle school and high school, so basketball was an easy choice. The bumps in the road, however, started in high school.

Wassler began his freshman season at St. Xavier high school in Cincinnati with a chipped bone in his ankle. The ailment was not enough to sideline him, so he persevered. At the end of the season, while wearing a knee brace, Wassler grabbed a rebound but fell to the floor, tearing the ACL in his left knee.

After rehabbing during the summer, Wassler greatly improved during his sophomore and junior seasons. But tragedy would strike again. Wassler tore his right ACL at a West Virginia University basketball camp the summer before his senior year.

“It obviously completely changed my senior year, rehabbing most of it. Playing a little bit at the end,” Wassler said.

Limited playing time in his final campaign led to several offers from Division-III colleges, but Wassler’s coach implored him to look at walk-on opportunities at schools like Xavier, UC, and NKU. Through discussions with then-head coach John Brannen, Wassler was offered a walk-on spot before he arrived on campus.

Just one year into Wassler’s tenure, Brannen left for UC and NKU hired current head coach Darrin Horn, leading to some uncertainty for Wassler. He thought Horn may bring in his own walk-ons or try to switch up the roster, but that wasn’t the case. Horn and his coaching staff had heard good things prior to meeting him, but were even more impressed once they got to know him.

“As good a guy as I’ve ever been around, in 20 plus years in the business, at understanding his role,” Horn said.

What, exactly, is Wassler’s role?

As a walk-on, his stat line doesn’t compare to that of Trevon Faulkner or Marques Warrick, but he still has all the responsibilities of a scholarship student-athlete. These include attending film and weight sessions, traveling on road trips and knowing the opposition’s scouting report. Wassler excels at all these duties because, as Horn said, he is “crazy smart”.

“He can not be in live action in practice for weeks on end and we can put him out there. And something we’ve talked about one time, he’ll do it perfect,” Horn said.

In addition to his commitment to the team, Wassler juggles life off the court. He is a Computer Information Technology major, he lives at home and commutes to campus to save money, and has a part-time job at his family’s butcher shop, Wassler Meats.

Horn said that being a walk-on is really about the player’s love for the game, since there is almost no return on a rather large investment. Like a chess pawn, walk-ons don’t accrue much playing time or fan recognition. Part of Wassler’s role is doing whatever it takes behind the scenes to help the team succeed. He has never searched for recognition, but instead, it found him.

Insert Chet Powell. The 2003 NKU graduate has season tickets in Section 110 of BB&T Arena. Powell and fellow graduates Tim Mullins (class of 2001) and Mike Hoerlein (class of 1997) have cheered Wassler’s name at home games since the 2019-2020 season.

The group’s antics actually started two years before with Chris Vogt, who played for the Norse from 2017-2019 before following Brannen to UC. Powell said he wanted to recognize a role player on a team with stars like Drew McDonald, Jalen Tate and Lavone Holland.

“The three of us were looking around like, ‘Who never gets in? Well, Chris doesn’t get in.’” Powell said.

Once Vogt left, they started looking for a new player to cheer for. Hoerlein saw Wassler, a sophomore at the time, at the end of the bench, recognizing him as a walk-on. The cheer’s inception garnered the same reaction from Horn, Wassler and his family: confusion.

“After the game, I asked, ‘Were they chanting David’s name?’” Horn said.

Over time, the Wasslers have become more familiar with the cheering section. They have gotten to know each other, take pictures, and even bring a cardboard cutout to games.

In the cheer’s brief history, Horn remembers one iteration more than the rest. On Feb. 16, 2020, NKU welcomed UIC to BB&T Arena. The Norse trailed by as many as 40 points late in the game, and the crowd thought Horn might empty his bench. Sensing the cheer coming, Wassler subtly got Powell’s attention, communicating that they shouldn’t call his name.

That’s the influence Wassler has over his own chant. If the game is going well and he might have a chance of going in, he’ll give Powell a barely noticeable thumbs up as if to say, “Okay, go ahead.” But if the Norse aren’t playing well, he shuts it down.

When COVID-19 prohibited fans from attending Norse home games, the cheer disappeared for a year. When fans returned on Nov. 4, 2021, Wassler’s supporters were stronger than ever. Because he missed the first few games rehabbing from knee surgery, the fans in Section 110 knew he wasn’t going to play. So they improvised.

Now, Wassler’s name can be heard at the 10-minute mark of the second half in every home game, regardless of score. Powell still leads the chant at the end of the game if the situation warrants, and Wassler believes it has been successful.

“It’s definitely worked. I think it’s had to add a couple minutes of playing time here and there,” Wassler said.

Perhaps the best example of the cheer’s effectiveness was the Norse’s contest against Alice Lloyd College in December. With 2:38 left and NKU leading by 32, Wassler subbed in for his first minutes of the season. In less than two minutes of game time, he recorded a three-pointer and a steal, much to the delight of his teammates and the crowd.

“When he made that three, this whole section went ballistic,” Powell said.

Wassler said that’s one of his favorite moments from his time at NKU, in addition to his first basket as a freshman. While Wassler takes pride in his achievements, he delights in seeing his teammates cheer for him, a role reversal from the norm.

“More than anything, when I make the shot or whatever, just seeing our bench’s reaction, that’s really what I enjoy the most,” Wassler said.

In honor of NKU’s senior day on Feb. 26, Powell is planning on making t-shirts with Wassler’s number 44 on them. Since Wassler is graduating in May, the trio will need to find a new player to recognize. The question is: Who will it be?

“We’ve got a good eight months to figure out who our next guy’s going to be,” Mullins said.

The trio may cheer for Jake Evans or Noah Hupmann, NKU’s other two walk-ons, or it may be a new addition to the roster. Whoever the lucky recipient, Powell said that Wassler is welcome to participate in the selection process and always has a seat in Section 110.

In the chess match that is the game of basketball, the walk-on may be comparable to a chess pawn, but Wassler will always be a king in the eyes of his most passionate supporters.