NKU women’s basketball comes from behind to defeat Oakland, 66-62 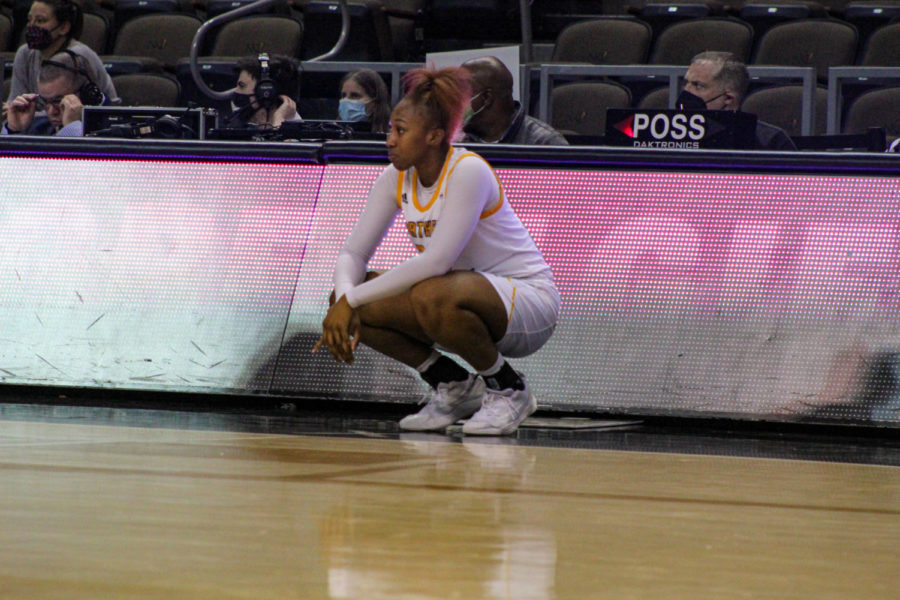 NKU forward Trinity Thompson waits to check into the game against UIC in February.

Entering Thursday’s game, the Northern Kentucky women’s basketball team was 16-1 when they outrebounded their opponent in the game. When the opponent grabbed more rebounds than them? 2-6.

Entering Thursday’s game, the Norse were 17-2 when leading the game at halftime. When trailing? 1-4.

Of course, neither of those two statistics are terribly surprising. Good teams are typically strong on the rebounding end and start games fast. Accordingly, good teams tend to win a lot of basketball games, which the Norse have in 2021-22.

Another hallmark of a good basketball team, however? They come back from adversity. And the Norse, despite being outrebounded and trailing at halftime, did just that on Thursday afternoon, coming from behind to defeat the Oakland Golden Grizzlies, 66-62.

“Championship teams got to win the close ones down the stretch, so we need games like this,” head coach Camryn Whitaker said.

Oakland’s leading scorer, guard Kahlaijah Dean, did not play on Thursday. Dean was sixth in the Horizon League at 15.3 points per game entering Thursday, but her absence didn’t seem to bother Oakland in the first half, as they jumped on the Norse early.

After four quick points to begin the game by senior forward Emmy Souder, the Norse offense struggled in the first quarter, while the Golden Grizzlies came into Highland Heights ready to play early on.

Led by six points each from guards Breanne Beatty and Lamariyee Williams, the Golden Grizzlies shot 57 percent from the field in the first quarter and led the Norse 17-13 going into the second quarter.

The Golden Grizzlies outrebounded the Norse 28-13 in the first half, but the Norse were able to claw back on the strength of a late run before halftime, trailing by just four at halftime, 28-24.

“I didn’t feel like we were playing hard, I felt like they were beating us to every loose ball, every 50-50 ball,” Whitaker said.

In the third quarter, the Norse leaned on junior guard Ivy Turner out of the gate, who scored the first six points for the Norse as they attempted to cut into the Oakland lead.

The Golden Grizzlies though came out with the same shooting efficiency and intensity that they displayed in the first half, connecting on four of their first five field goals, led by Beatty who had 16 points midway through the third quarter.

The Norse continued to chip away, cutting the lead to 42-38, then 44-40, but the Golden Grizzlies continued to respond with timely baskets of their own, taking a 46-40 lead into the fourth quarter.

In the fourth quarter, the Norse leaned on the player that had guided them to their 18-7 overall record and 12-6 Horizon League record: former five-star guard Lindsey Duvall.

A pair of baskets from Duvall to open the final quarter trimmed the Oakland lead to two, 46-44. Two minutes later with the Norse down 48-46, Duvall drove the baseline, drew contact from a defender and fired the layup.

Duvall would sink the ensuing free throw, giving the Norse their first lead of the second half, 49-48.

On the next possession, it was another leader that gave the Norse a massive basket, as graduate forward Grayson Rose buried a three to put the Norse on top once again, 52-49. A Turner layup moments later stretched the lead to 54-49, the Norse largest lead of the game.

A 5-0 run by the Golden Grizzlies with under two minutes remaining evened the score at 58 with just over a minute to go. A pair of free throws by Rose (sparked by a huge offensive rebound as the shot clock ticked down) put the Norse back on top, 60-58.

After forcing a five-second violation, the Norse went to Turner, who dribbled at the top of the key, drove into the lane and finished with an impressive layup, stretching the Norse lead to 62-58 with 28 seconds remaining.

Duvall and Turner each finished the game with 18 points, with each picking up timely baskets in the fourth quarter.

“I have to give all credit to my teammates, they were giving me the ball in really good situations, which led me to be scoring,” Duvall said.

Late free throws sealed the game for the Norse as they improved to 19-7 overall and 13-6 in the Horizon League.

“This gives us great momentum, we’re trying to finish out the season with 20 wins and so this game here is big for us,” Turner said.

The Norse will conclude the regular season at BB&T Arena with a game against Detroit Mercy on Saturday at 2 p.m.