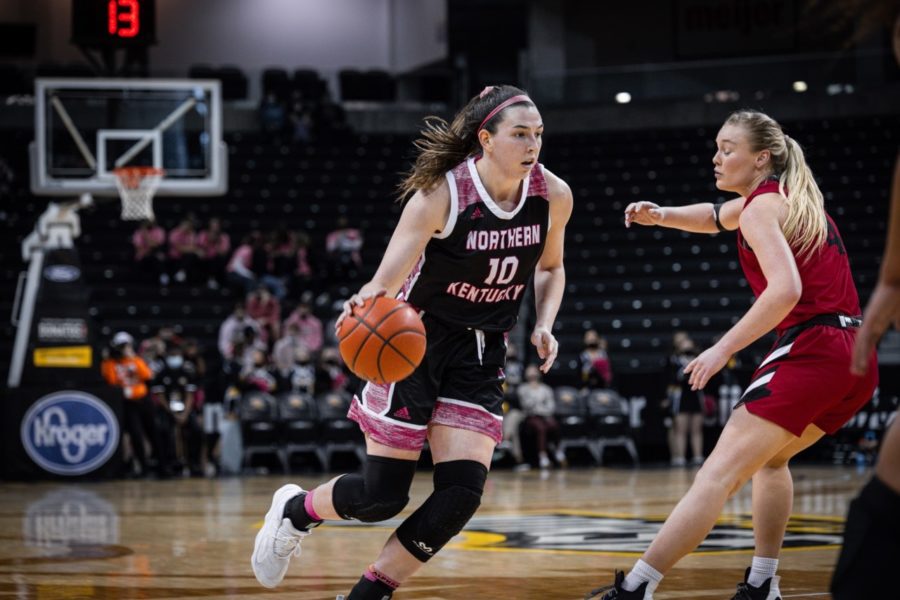 NKU forward Grayson Rose (10) drives into the lane against IUPUI on Saturday.

The Norse struggled on the offensive end Friday night at Detroit Mercy, falling to the Titans 60-52. NKU’s 52 points were 18 below its season average.

With the victory, the Titans secured the regular season sweep of the Norse, following their Feb. 5 victory over NKU at BB&T Arena.

Neither team was able to put together a consistent offensive attack in the first half, as the score was tied at 20 at the break. In the second half, the Norse pulled within two points on a Trevon Faulkner three with 14:38 remaining, but the Titans proceeded to go on a 20-5 run, creating separation from the Norse.

NKU freshman guard Hubertas Pivorius connected on four of five three point field goals in the second half, bringing the Norse within four with under a minute to go, but it was not quite enough to complete the comeback.

The Norse picked up the win on Sunday afternoon, defeating the Oakland Golden Grizzlies to secure the regular season sweep over their Horizon League foe. NKU forced 23 Oakland turnovers and overcame a 13-point deficit to secure the 71-66 road victory.

34 of the Norse’s 71 points came off of those turnovers, as the Norse vaulted from fifth place in the Horizon League standings to third place with the win.

Warrick paced the Norse offensively once again on Sunday afternoon, this time delivering 27 points on 10-21 shooting from the field, while also dishing out four assists and picking up three steals. Nelson narrowly missed a double-double, adding 10 points and nine rebounds.

With the Golden Grizzlies leading in the second half, it was Pivorius once again coming up big off the bench for the Norse, depositing back-to-back threes to give the Norse their first lead of the game, 50-48.

Oakland once again grabbed the lead, but another Pivorius three with just under six minutes remaining gave the Norse the lead for good, 56-55.

Faulkner and senior guard Bryson Langdon knocked down four free throws in the final 15 seconds to seal the victory, as the Norse improved to 16-11 overall and 12-6 in the Horizon League.

The Norse are back at BB&T Arena on Thursday, Feb. 24 as they take on Robert Morris at 7 p.m.

The NKU women’s basketball team faced a tough test on Friday night, traveling to Youngstown State to take on the Penguins, who entered the game 15-3 in Horizon League play.

Despite trailing by just one at halftime, the Norse were unable to keep up with Youngstown State, falling 62-49.

A 14-2 run in the third quarter propelled the Penguins ahead and put the game out of reach for NKU. The Norse managed to pull within eight points in the fourth quarter, but YSU kept up its offensive success to finish off the victory.

Guard Lindsey Duvall led the Norse with 13 points, while forward Grayson Rose grabbed 12 rebounds and blocked six shots, in addition to her nine points. Rose also made history on Friday night, becoming NKU’s all-time leader in career games played with 132, surpassing Amy Mobley who played with the Norse from 1999-2003.

The Norse bounced back on Sunday afternoon at Robert Morris, easily dispatching the Colonials 64-49 behind Duvall’s 18 points.

NKU got off to a blazing start, jumping out to a 15-0 lead within the first five minutes of action, setting the pace for a lopsided affair.

A lengthy scoring drought in the second quarter slowed the Norse’s momentum, though stingy defense was able to keep them in the lead. A three and a driving layup by Duvall at the end of the half stretched the lead to 30-20 at intermission.

The Norse are back in action on Feb. 24 when they host the Oakland Golden Grizzlies at 4 p.m. at BB&T Arena.

The NKU baseball team opened their season over the weekend at East Tennessee State, though they struggled to keep the Buccaneers off the scoreboard throughout the weekend, getting swept in the three-game series.

ETSU got out to a blazing start in game one on Friday, scoring seven first inning runs as they mounted a 10-1 lead going into the fourth inning. Outfielder Brennan Gick delivered the first run of the season for the Norse, blasting a solo home run in the third inning that blasted off the scoreboard in left field. Gick posted a tremendous day on Friday, going 3-4 with three RBIs.

Despite a four-run fourth inning to draw closer, the Buccaneers outlasted the Norse 12-7 on Friday.

The Norse made Saturday’s competition more competitive early, as starting pitcher Ben Gerl went 3.2 innings, allowing four earned runs. The offense kept the Norse afloat for the first half of the game, as infielder Manny Vorhees hit his first home run in a Norse uniform.

Leading 6-4 in the bottom of the sixth, the Buccaneers poured it on for a four-run frame, extending the lead to 10-4. ETSU would go on to win 12-4.

On Sunday, it was another slow start that doomed the Norse as five runs in the second inning by ETSU and another two in the third put the game out of reach early on. Buccaneers starter Hunter Lloyd was tremendous on Sunday afternoon, going five innings, allowing zero runs and punching out 10.

NKU pushed three across the board in the eighth inning courtesy of back-to-back home runs by infielders Noah Fisher and Treyvin Moss, though the final score was once again lopsided in favor of ETSU, as they prevailed 14-3.

The Norse will meet the Mississippi State Bulldogs in a three-game road series beginning Friday, Feb. 25. The Bulldogs are currently ranked third in the country.

The NKU softball team capped off their five-game weekend with a 4-2 victory over Canisius in the Upstate Classic.

The Norse are 6-4 to start the season, and went 2-3 in the Classic, snapping a three-game losing streak with Sunday’s victory.

NKU played back-to-back doubleheaders on Friday and Saturday, losing three of four games, including two games to the University of South Carolina- Upstate, who defeated the Norse once each day by a combined 8-1 score.

Senior Kendyl McKeough leads the team so far this season with a 1.117 OPS and 12 hits, while O’Hair is second on the Norse with 10 hits, junior Tatum Biddle and senior Jordan Jenkins have collected eight apiece.

Among the pitchers, Flores leads NKU with 29 strikeouts in 23.1 innings pitched so far, followed by junior Lauryn Hicks and sophomore Madisyn Eads with 12 punchouts.

The Norse are back in action on Friday, Feb. 25 in the Duke Invitational, beginning with the Michigan Wolverines in Durham, North Carolina. The Norse will also face Army and Duke over the weekend.