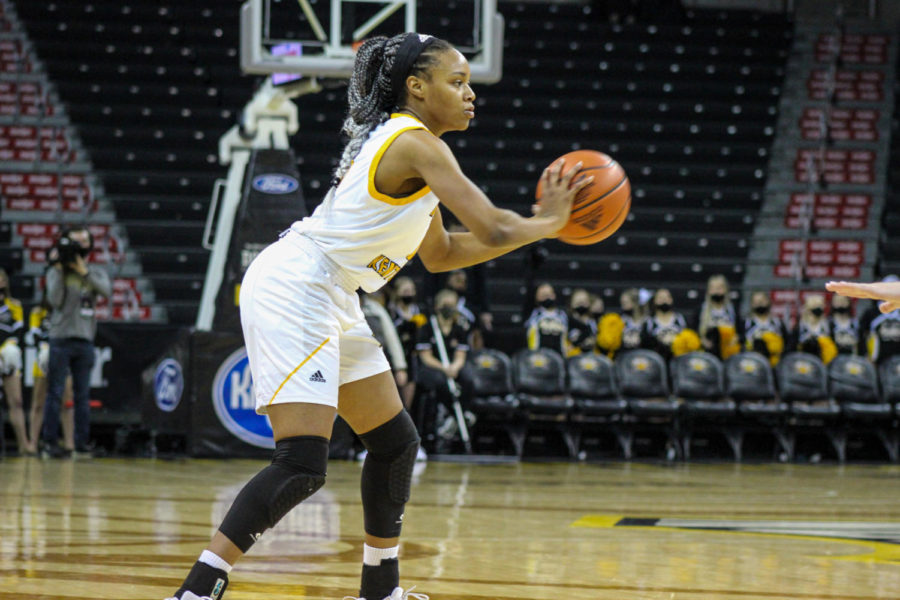 The Green Bay Phoenix women’s basketball team came into BB&T Arena and shot a blistering 55.8 percent from the field and 63.6 percent from three, as they defeated Northern Kentucky 67-58, snapping the Norse 10-game winning streak.

The Norse jumped out to a quick 12-6 lead in the first quarter, as senior forward Emmy Souder scored four points, while the Norse connected on four of their first five field goals. Junior guard Ivy Turner, coming off a 23-point game against Milwaukee on Thursday, assisted on three of those first four field goals.

Strong defense from Green Bay kept the Phoenix in the game at the end of the first quarter, as the Norse led 14-11. The Phoenix, fresh off a 73-51 annihilation of Wright State on Thursday, entered Saturday’s game with the second-best scoring defense in the Horizon League, allowing just 56.1 points per game.

“They clog up your drives, they force you to take more threes than you probably typically would and they’re tough and physical,” head coach Camryn Whitaker said about the problems the Norse faced with Green Bay’s defense. “It’s extremely difficult to play against and it kind of messes up your offensive flow.”

Turner got in the scoring column for the Norse in the second quarter with five quick points, sparking an 8-0 run to put NKU ahead 24-16.

Green Bay continued to cut into the Norse lead however, paced by junior guard Hailey Oskey and sophomore forward Julia Hartwig with seven points each. An and-one by Hartwig with just over 1:30 remaining in the second quarter evened the score at 25. A three from sophomore guard Cassie Schiltz pushed the Phoenix ahead for the first time in the afternoon, before NKU freshman Kailee Davis buried a three to send the game to halftime tied at 28.

Eight consecutive points from Oskey, including a pair of threes, gave the Phoenix another lead at the beginning of the third quarter, 36-31. A 12-1 run in the third quarter pushed Green Bay’s lead even further to 40-31.

Halfway through the third period, Green Bay was shooting 56.3 percent from the field and 62.5 percent from three, while the Norse were shooting just 33.3 and 27.8 percent respectively.

By the end of the quarter, the Norse continued to tread water, as Oskey and the Phoenix took a 54-42 lead into the final quarter.

Down 11 with just under five minutes to play, the Norse continued to creep back into the game, as several timely baskets by Duvall brought the Norse to within five with 1:41 left to play.

“In the timeouts, we were just saying take it one possession at a time and we tried to slowly take away at the scoring and hopefully we’re one or two possessions away, which we were at the very end,” Souder said.

After a massive stop, a layup by Turner cut the lead to three with under a minute to play, setting up a clutch shot by Schiltz for the Phoenix, as she connected on a contested shot from the right of the paint, increasing the lead to five with 24.5 seconds remaining.

Back-to-back empty possessions from NKU and several free throws by Green Bay (the Phoenix were 12-12 in the game from the line) sealed the game, as the Norse streak officially came to an end with a 67-58 defeat.

“I think we can learn a lot, especially with defense towards the end,” Duvall said. “I think a lot of their points were honestly at the very end of the 30 seconds, and I think we can learn from there, just locking in, if we can lock in on 30 seconds even if we have a bad shooting night, we can hang in there and even win the game.”

The Phoenix continued to knock down shot after shot on Saturday, but they also did what so many of NKU’s opponents were not able to do during their 10-game winning streak: shut down the Norse offensive attack.

Green Bay held NKU to 35.6 percent from the field for the game and 20.7 percent from beyond the arc, while forcing 19 Norse turnovers.

Duvall led the Norse in points with 17 and rebounds with nine, while Turner scored 13 with four assists. Souder chipped in 10 points and seven rebounds, while also shooting a perfect 6-6 from the free-throw line.

For Green Bay, Oskey led the way with 22 points, shooting 8-12 from the field and 3-3 from beyond the arc. Schiltz added 14 points, and freshman forward Maddy Schreiber contributed six points and five rebounds.

As the Norse begin their quest to start a new winning streak, they will have to do so away from home, as their next three contests will be on the road, beginning with a trip to UIC on Feb. 1. The Norse, who are 14-4 on the season following Saturday’s loss, are 9-1 on the road, with their lone loss coming to Milwaukee, a team the Norse just defeated earlier this week.

“At the end of the day, the streaks don’t matter,” Whitaker said. “What matters is how we played. We’re 14-4, off to the best start since we’ve gone Division-I and this game does not take away from that.”