NKU women’s basketball uses defensive effort to get past Milwaukee 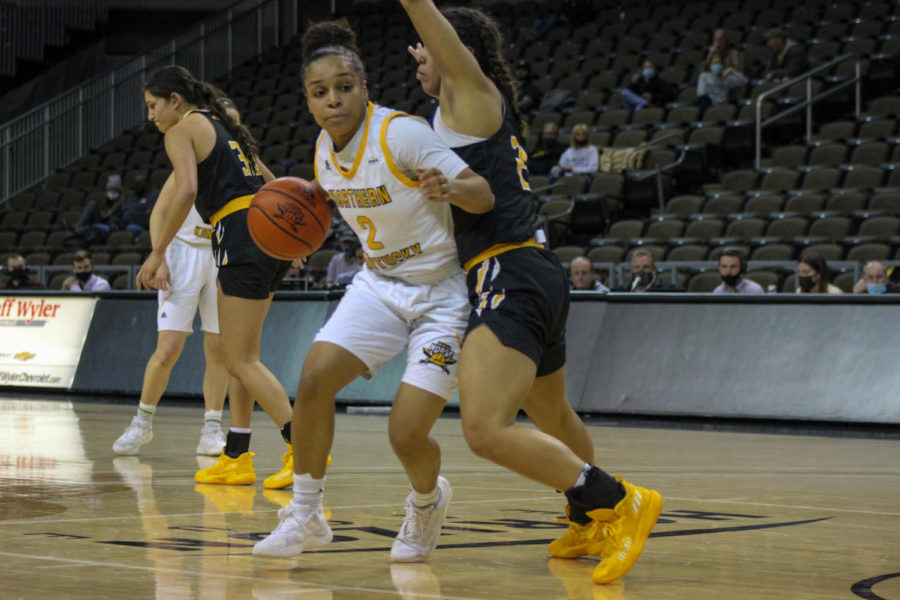 Guard Ivy Turner drives into the lane against Milwaukee on Thursday. Turner led the Norse with 23 points.

The NKU women’s basketball team avenged their November road loss to Milwaukee on Thursday night, surviving a late scare from the Panthers to win 61-53. The win brings myriad footnotes for the Norse. They now sit at 14-3, their best record since winning their first 16 games in 2008, and own a 10-game winning streak, tops in the Horizon League. Milwaukee drops to 7-11 overall and 6-5 in league play.

The win didn’t come easily; Milwaukee raced out to an 8-3 lead as NKU made one of their first six field goals. NKU responded with a 10-2 run, taking their first lead of the game on a Kailee Davis triple, one of five Norse connections from deep in the first half.

Although the first half was an offensive struggle for both teams, the Norse held a one point advantage thanks to hustle plays from freshman guard Kailee Davis. The freshman displayed her toughness by finishing a layup through contact, as well as stripping the ball on an Alyssa Moore drive to the basket.

“I think everybody who was here got to see it for themselves. And that’s how we are capable of playing every night, being fundamentally sound defensively.” head coach Camryn Whitaker said.

Once the offense got going, NKU opened up their largest lead of the game on back-to-back layups from Emmy Souder and Grayson Rose. Ivy Turner’s baseline jumper with 1:52 left was the final basket of the half for either team, as the Norse entered the locker room with a 33-22 lead. The lead was helped by NKU shooting 50 percent from the field in the second quarter, leading to a 20-10 scoring advantage for the Norse.

The final defensive stand took place at the end of the half as the Norse forced a shot clock violation, the last of seven first half turnovers by the Panthers.

NKU only shot 33 percent from deep in the opening 20 minutes, but Turner and Davis each made two three-pointers to spark the Norse. Milwaukee scored 20 of their 22 first half points in the paint, with the other two points coming from made free throws.

Turner began the second half where she left off in the first, scoring the first two baskets, including a coast-to-coast layup after a defensive rebound. The junior point guard has been on an offensive tear, averaging 17.8 points over her last eight games.

“I just try to play my game. Shoot when I’m open, shoot with confidence, and attack the rim.” Turner said.

Despite shooting 41 percent from the field in the first half, NKU didn’t shoot a free throw until midway through the third quarter, at which point the Panthers had already shot six from the charity stripe. Despite Milwaukee making their first three shots from deep in the third quarter, they were unable to close the halftime gap, trailing 49-38 entering the final 10 minutes.

The Panthers scored the first six points of the final quarter to draw within five, their smallest deficit since the first half. As a result of several miscues, the first Norse basket didn’t fall until halfway through the quarter, the result of a beautiful no-look pass from Turner to set up Souder for a layup.

Milwaukee got as close as three with a Sydney Staver three-pointer, but Lindsey Duvall responded with five straight points to give the Norse an eight-point lead. The redshirt senior has now scored 10 or more points in all 36 games she has suited up for NKU. In addition to finishing with 12 points, Duvall netted her seventh double-double of the season, grabbing 10 rebounds.

After three empty Norse possessions, the Panthers had the ball down three points with 37 seconds left. Head coach Kyle Rechlicz used two timeouts to set up an offensive scheme, but to no avail. Milwaukee missed their final four three-point attempts, and the Norse were able to close the game out at the free throw line.

“We really try to focus on us, and play how we play, and not worry so much about what the other team does.” Whitaker said.

Coming in at ninth in scoring in the Horizon League, Megan Walstad surpassed her average of 13.1 points per game to lead the Panthers with 18 points and eight rebounds. Staver and Emma Wittmershaus joined her in double figures with 13 and 11 points, respectively.

Thanks to a first half outburst, Turner led all scorers with 23 points, missing her season-high by one. Davis and Khamari Mitchell- Steen, the two most recent Freshman of the Week in the Horizon League, chipped in eight and nine points.

The Norse wrap up their home stand against the Green Bay Phoenix on Saturday, Jan. 29. Tipoff is at 2 p.m., and can be seen on ESPN+.