Gross joined the team on Wednesday and was introduced at a press conference. 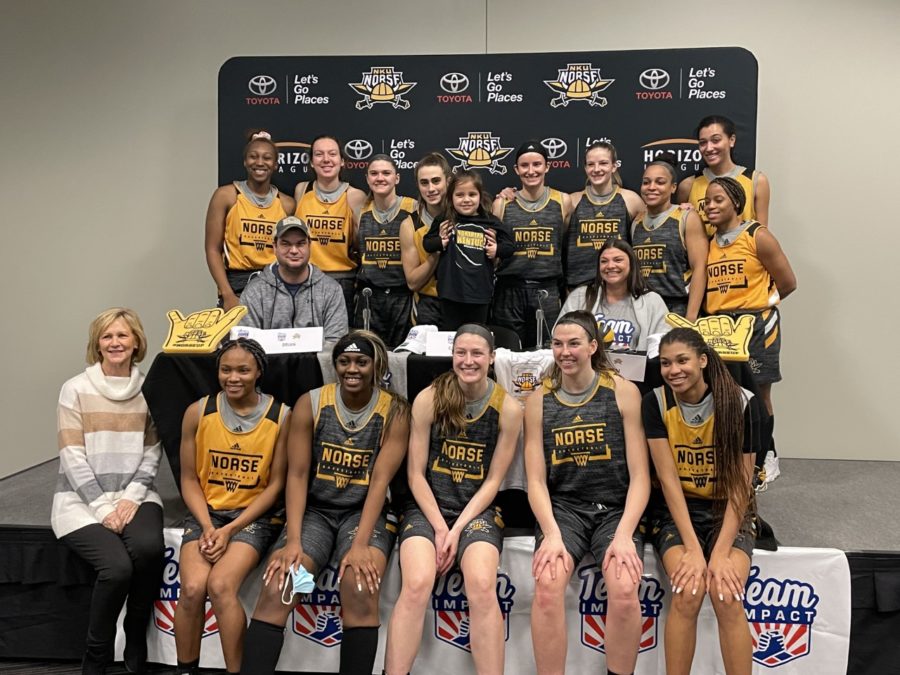 The NKU women's basketball team gathers for a picture with six-year-old Caroline Gross, who has joined the team through a partnership with Team IMPACT.

On Wednesday, Dec. 29, the Northern Kentucky University women’s basketball team added a new member in six year-old Caroline Gross. The team signed Gross through a partnership with Team IMPACT, a non-profit who “… tackles the emotional trauma and social isolation experienced by children facing serious and chronic illnesses by matching them with a college athletic team.” (from teamimpact.org)

Gross has Vein of Galen Malformation, a condition which affects blood flow to and from the brain.

Head coach Camryn Whitaker opened the press conference by thanking the Gross family for being a part of the team before senior Grayson Rose gave Caroline the go-ahead to put pen to paper.

“Caroline inspires us more than we inspire her.” Whitaker said.

After signing her letter, the team presented her with a goody bag filled with balloons, NKU spirit wear, and a Christmas tree ornament.

When asked how it feels to be part of a collegiate basketball team, Gross responded with one word.

The partnership allows Caroline and her family to attend NKU practices and games, as well as spend time together off the court. Members of the team spent time with Caroline on her birthday, have had ice cream together, and regularly meet over Zoom.

“This connection to NKU has been huge for Caroline and for our family.” Caroline’s mother, Megan, said.

According to Whitaker, the signing day has been in the works for about a year and a half. This is the first time the women’s basketball team has partnered with Team IMPACT, and was in part inspired by the NKU volleyball team’s past affiliation with the organization. In addition to community service, Whitaker and her team were looking for other ways to be active in the community.

“At the end of the day, we want to be positive role models.” Whitaker said.