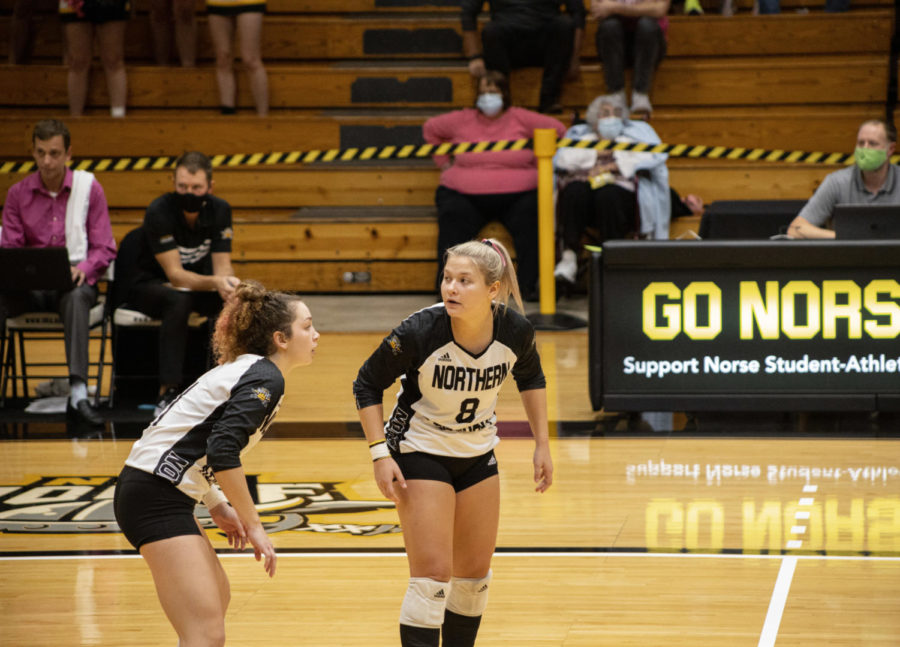 Members of the NKU volleyball team during the Norse 3-2 loss to Wright State on Friday.

Playing in their third Horizon League tournament championship in four years, the NKU volleyball team faced upset-minded UIC with an NCAA Tournament berth on the line. The Norse advanced to the final after defeating rival Wright State in five sets, whereas the Flames beat tournament host and top-seeded Milwaukee on Friday night.

Aided by four UIC errors, the Norse took a quick 7-2 lead in the opening set. Behind three kills from Reilly Briggs, NKU expanded their advantage to 11 points. The Flames all but handed the first set to the Norse, committing 16 total errors en route to a 25-16 win for NKU. The Norse also registered five blocks, reiterating why they led the Horizon League in the stat.

UIC woke up in the second set, using powerful swings from Paola Santiago and Martina Delucchi to establish a 12-6 lead. Four kills from Anna Brinkmann helped pull the Norse within two points, but the Flames held steady, taking the second set 25-21 behind 18 team kills and a .400 hitting percentage. Santiago and Delucchi finished with five kills apiece to lead the Flames.

The third set began in a competitive fashion. The Norse opened up several two point leads early, but each time UIC responded with two points of their own. The set also featured the longest rally of the match, which fittingly ended with the NKU’s seventh block of the match. In a set where the largest lead for either team was four points, UIC scored the final four points to take the 25-22 set win, and a 2-1 match advantage.

With UIC taking a 5-1 lead to start the fourth set, Norse head coach Liz Hart was forced into a timeout with her team’s back against an early wall. Trailing by as many as six, NKU rattled off a 10-2 run to take the lead. Facing a continual two point deficit, the Norse rattled off five straight points to hold set point at 24-21. UIC responded by scoring three straight to erase set point. NKU shot back with two points of their own to win the set on a Natalie Hartig kill. In a match where the Norse consistently hit below .200, they forced a fifth set by hitting .227 in the penultimate stanza. Brinkmann led NKU with six kills in the set.

With both teams participating in a five-set match for the second time in as many days, UIC took a commanding 7-2 lead in the race to 15 points. UIC held championship match point at 14-8, but the Norse erased the deficit on the back of four straight blocks. After both teams held match point, UIC won the championship set 18-16 on an attack error by the Norse. The Flames became the fifth different team to win the Horizon League championship in five years.

Brinkman and Briggs were both named to the all-tournament team, recording 18 and 14 kills in the championship match. Brinkmann finished off her career with another double-double, adding 13 digs. As a team, NKU blocked 16 UIC attacks, good for 3.2 per set average. The Norse must wait until Nov. 28 to see if they are awarded an at-large bid to the NCAA Tournament.