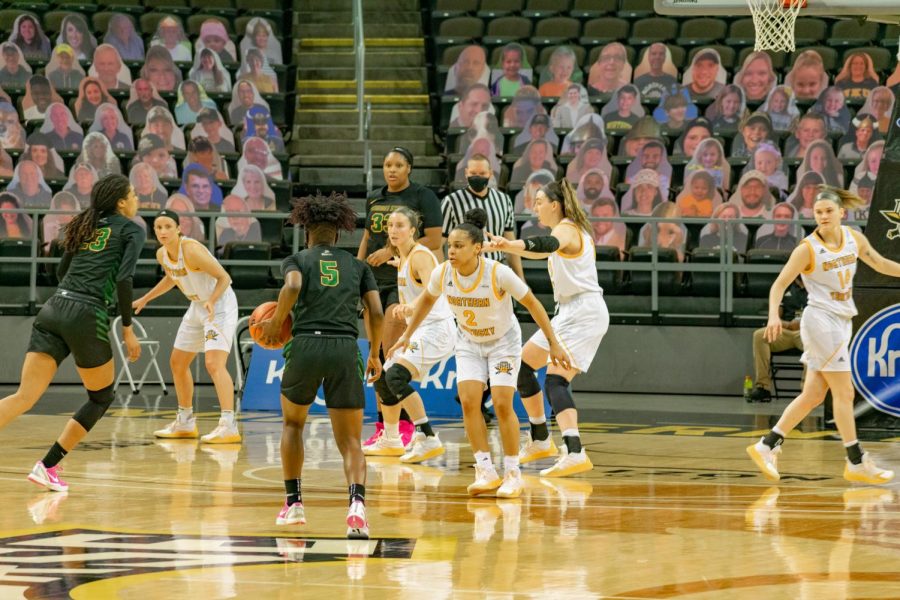 The Norse defend the perimeter against Wright State.

Here are a few games to circle on the calendar

As BB&T Arena prepares to open its doors to fans for the first time since February of 2020, here are the games that Norse supporters should have circled on their calendar.

The Spartans are coming off a 21-9 season in which they lost to Florida State in the first round of the NCAA Tournament. After losing head coach Wes Miller and multiple transfers to the University of Cincinnati, UNCG looks to junior Keyshaun Langley and graduate student Kaleb Hunter to lead the way in scoring.

The big story for the Panthers is Patrick Baldwin Jr. The son of head coach Pat Baldwin was a consensus top-10 recruit coming out of high school, and is the first five-star to commit to a mid-major since Charles Bassey committed to Western Kentucky in 2018. Milwaukee was also picked to finish fourth in the Horizon League preseason poll.

Despite losing do-it-all senior Loudon Love, the Raiders were picked to finish second in the Horizon League, one spot above the Norse. In what is sure to be a heated rivalry game, look for Wright State to be led by junior Tanner Holden (11.8 ppg and 6.5 rebound per game last year), redshirt junior Grant Basile (6.2 ppg), and redshirt senior James Manns (5.7 ppg).

The Vikings visit BB&T Arena in late January, led by Tre Gomillion, Torrey Patton, D’Moi Hodge and Craig Beaudion. Patton was named to last year’s Horizon League First Team, and was the tournament MVP. The return of all four players is a big reason why the Vikings are projected to win the conference this year. Side note: keep an eye on the Viking bench for Ben Sternberg, a walk-on and the team’s ultimate cheerleader.

Similar to Milwaukee, the Titans are led by Antoine Davis, the son of head coach Mike Davis. Davis has a slew of accolades to his name, including Horizon League Freshman of the Year in 2019, three-time Horizon League first team member, over 2,000 career points, and is the preseason player of the year this year. Along with Davis (24.0 ppg last year), the Titans are led by Noah Waterman (11.9 ppg) and Matt Johnson (8.5 ppg)

The Penguins (the PENGUINS!) were picked to finish seventh in the preseason poll, and their top returning scorers are Garrett Covington and Shemar Rathan-Mayes, who both averaged over 10 points per game last year. But the story here is about Northern Kentucky, as the Norse will honor Trevon Faulkner, Bryson Langdon, Adrian Nelson, and David Wassler on Senior night.

Head coach Camryn Whitaker has stated that she can’t wait to get the season underway, and the Golden Flashes provide the perfect opportunity. Kent State returns their top eight scorers from a team that finished with an 11-9 record last year.

The Norse open their season with a second home game in less than a week. The Colonels return five of their top six scorers from a team that finished with a 9-15 record last year, including 8-12 in the Atlantic Sun Conference (NKU’s former conference).

NKU opens Horizon League play with a visit from the Vikings. Cleveland State is led by former Horizon League Defensive Player of the Year Mariah White and Nadia Dumas, who averaged 9.4 points per game last year. The two teams did not play last year due to COVID-19.

The Raiders are coming off a season that saw them win the Horizon League Tournament and upset Arkansas on their way to the second round of the NCAA Tournament. Wright State was picked to finish seventh in the conference after losing a combined 38.2 points per game from last season. Their top returning scorer is junior guard Jada Roberson, who averaged 6.9 points per game in her sophomore campaign.

The Jaguars may well provide the toughest home test for the Norse this year. Picked to finish first in the Horizon League, IUPUI features two players named to the preseason Horizon League first team in Rachel McLimore and Macee Williams, who is also preseason Player of the Year.

Similar to the men’s team, the story here is less about the Titans —who were picked to finish last in the Horizon League— and more about the Norse. Northern Kentucky will bid farewell to seniors Lindsey Duvall, Grayson Rose, and Emmy Souder.