Back for one more season, Grayson Rose striving to lead Norse to the tournament 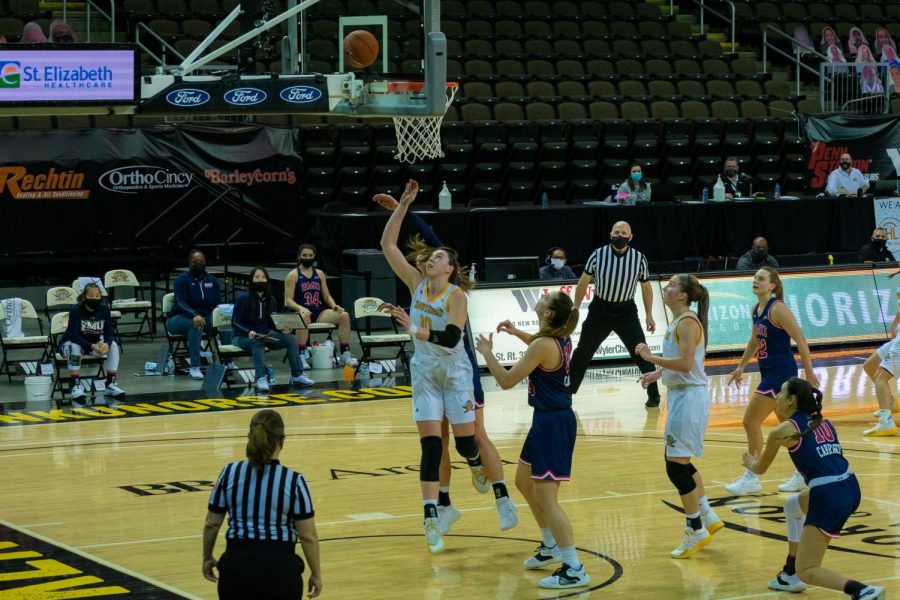 In October of 2020, the NCAA announced their decision to grant an extra year of eligibility to all winter sports athletes, after previously announcing the same for spring and fall sports student athletes.

At NKU, the move affected several different sports and athletes, including women’s basketball and a player that has become an integral part of the program since 2017, forward Grayson Rose.

Rose, now a graduate student, has made the decision to return to NKU for one more season, taking advantage of the extra year afforded to her by the NCAA. It was a decision that Rose said was on her mind before last season even concluded.

Rose talked with head coach Camryn Whitaker during the 2020-21 season about the possibility of coming back for one more season, partly due to the adversity that the team faced last season with COVID-19. On Apr. 9, the NKU women’s basketball Twitter page officially made the announcement that Rose would return for one more year.

“It definitely was the best decision for myself, career-wise and obviously I just wasn’t ready to part ways with this university, and being able to have somewhat of a normal season this year, with our parents and our fans being able to come back definitely were a couple of the factors to come back,” Rose said.

Rose talked about how difficult last season was , as no fans were permitted inside BB&T Arena, including parents and family members. To have those fans be able to return this season was one of the reasons that Rose came back for one more go around.

“Seeing your family and seeing your friends after games is something that I don’t want to ever take for granted, because last year was tough,” Rose said.

While Rose ultimately made the decision to return for one more season, another senior on last season’s roster, Kailey Coffey, will not be back with the team this season. Coffey was the third  leading scorer for the Norse with 8.6 points per game, and was also one of just two players on the team to start in all 19 games last season, along with guard Ivy Turner. Her absence leaves a void in the lineup that NKU will have to try to fill this season.

“It’s hard to say, because Kailey was such a great player and team player and leader on the floor, but I think that everybody as a whole has contributed something different that kind of fills that spot,” Rose said.

Unquestionably a veteran leader on the Norse going into the 2021-22 season, Rose said that she has tried to use the experience that she has picked up since joining the program in 2017 to help the younger players.

“We definitely have a really good group of underclassmen, and they’re excited to learn, so it’s not really hard to teach them,” Rose said. “I feel like they catch on pretty quick, so just leading by example and preparing everyone for what we’re going to face with conference, since we play conference play early this year.”

The Norse will begin Horizon League play earlier than usual in 2021-22, playing at Green Bay and Milwaukee in mid-November, while also hosting Cleveland State and Purdue Fort Wayne on Dec. 3 and 5. NKU will continue to face non-conference opponents in the time between those games, as well as leading up to the Dec. 31 game against IUPUI, when the schedule becomes exclusively conference games for the rest of the regular season.

A part of the NKU women’s basketball program since 2017, Rose has been able to watch the program develop during her time in Highland Heights, beginning with a 9-22 record in her freshman season, and culminating in a 20-12 record and an appearance in the Horizon League semifinals in the 2019-20 season, Rose’s junior campaign.

“We just have the players that have bought in and now it’s on us as players, because we have veterans, we have a winning culture to put that on the underclassmen and we just have a really good culture,” Rose said.

According to Rose, a big part of that culture development has come from the coaching staff and Whitaker, who Rose referred to as a “second mom away from home.”

“She cares about us outside of the floor, and we know that she expects a lot from us when we’re on the court, but we have a really good relationship and I’m really thankful for her,” Rose said about Whitaker.

Whitaker said that having Rose back in the fold for one more season is huge for the team, particularly with the energy that she brings and the experience that she adds to the roster.

“To have somebody come back that’s been with me for four years, and she knows what I want, she knows how we need to do things, and Grayson’s got a way about her that people just like her,” Whitaker said. “She’s put in her time and people respect her, and she’s gotten better every year.”

Over the offseason, Rose continued to work on her post moves and inside game, hoping to be able to continue to strengthen that aspect of her game. While she has not set any individual goals for herself, Rose said that her main focus is doing anything that she can to help the team win the Horizon League and advance to the NCAA Tournament.

“That would mean so much to me, going out like that… there’s just no words to describe that,” Rose said. “I think that we can do it this year, top to bottom we have what it takes to get there.”