Norse will begin the regular season on Tuesday night versus Wheeling 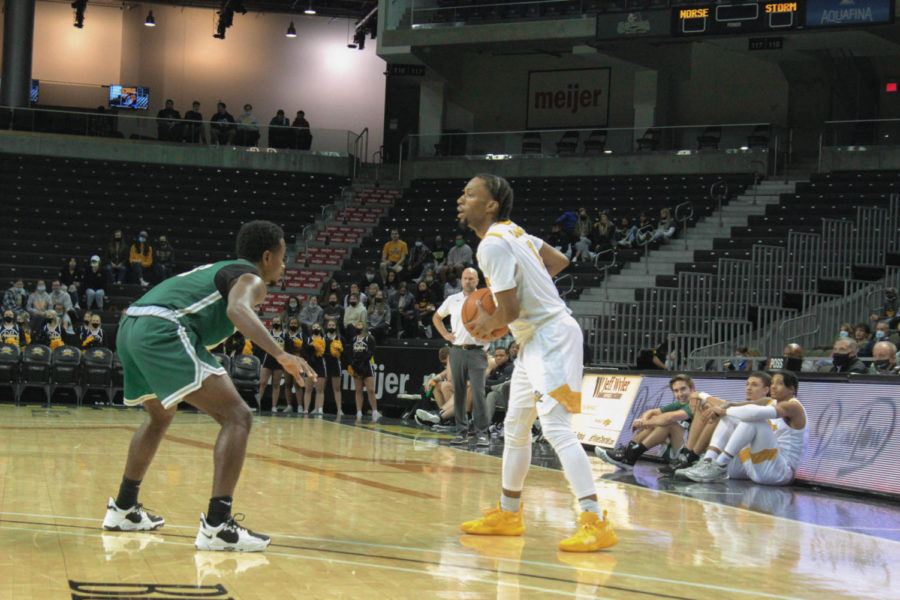 The Northern Kentucky Norse men’s basketball team defeated the Lake Erie Storm (DII) on Thursday night 75-64 in their only exhibition game of the season.

Sophomore Marques Warrick led the way for the Norse with 15 points, and senior Adrian Nelson led the way on the boards with 9 rebounds. The Norse got contributions from a number of players with six of them scoring at least 9 points.

The game was closely contested for most of the first half ending 35-31, as both teams were trading baskets.

“I thought we looked a little tight, we hadn’t played in front of fans in a while in the first half”, Horn said.

Senior forward Adrian Nelson explained what the difference was between the two halves, and what Coach Darrin Horn had to say in the locker room at halftime.

“Pretty much being together as a team, in the first half I feel like we were lacking energy as a team and weren’t really playing together, so it was just a big emphasis coming into the film room to just really pick it up in the second half, and as you seen we really started getting things going in the second half”, Nelson said.

Pair of newcomers impressive in debuts

One of those players being freshman point guard Sam Vinson, who earned his first collegiate start. Horn had a lot to say about his floor general.

“He started because the way he has played in practice, pretty obvious to see he has a tremendous upside and can impact the game in a lot of ways. I mean he’s a 6’5 point guard, so great size on the perimeter, and also in the paint. We think he’s a guy that’s only going to get better and better,” Horn said.

Vinson’s teammate Chris Brandon was very active on the glass in his debut, and Horn emphasized what Brandon can bring to the table for the Norse going forward.

“We think we have as good and impactful on the glass energy guy in college basketball in Adrian, and to add another guy who plays very similar, the way we look at the impact of both of those guys, it’s pretty impressive numbers from that position. It is a real luxury to have two guys like that at that position”, Horn said.

Böhm spent the summer in his native Czech Republic training with their national team. Böhm explained how he was able to use this experience as a learning tool and a way to improve his game.

“It helped me a play a different style of basketball. European basketball is a lot slower and a lot more thinking. That is something that I think I can bring to this team, being a patient guy that tries to make the best play every time”, Böhm said.

Fans Back in BB&T Arena after 20-month pause

Coach Horn expressed his appreciation for the fans and how happy he was to see them back in the seats again.

“I think the first thing is obvious, how good it was to be out in front of fans again. Being in an actual game atmosphere, I can’t  thank Norse Nation enough. That was a terrific turnout for an exhibition game on a Thursday night against a non-DI school. It was really nice to see our guys get out there and be a part of that”, Horn said.

The Norse start their 2021-2022 regular season against the Wheeling Cardinals on Tuesday night at 7:00 PM in BB&T Arena.