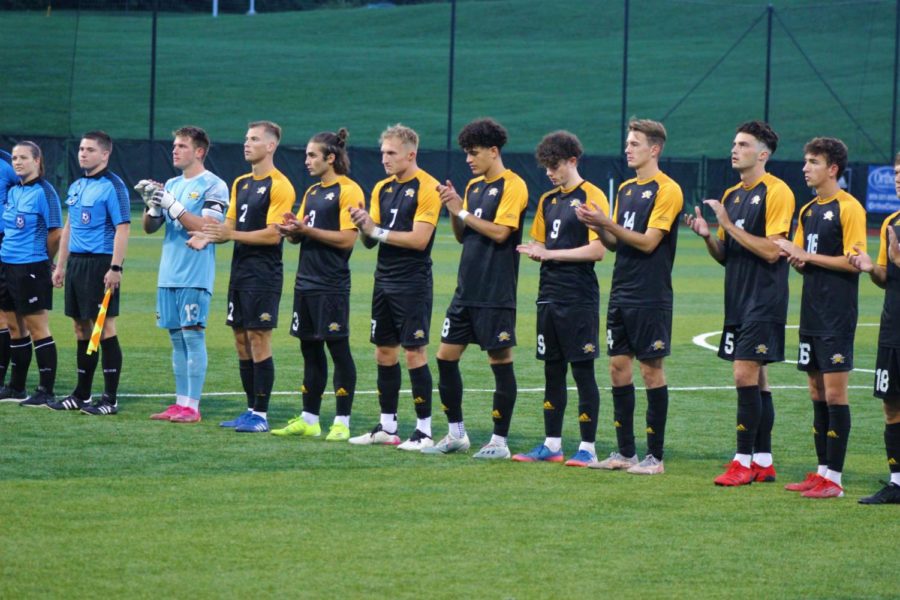 The starters for the NKU men's soccer team are introduced before their match against Detroit Mercy on Saturday.

Competing against a conference opponent is always going to be a tough game. However, on Saturday, the Northern Kentucky men’s soccer team was able to pull out a close win in overtime, defeating Detroit Mercy 1-0 to improve to 5-7 overall and 3-3 in the Horizon League.

Tied at zero throughout the entirety of the regulation period, NKU midfielder Ben Hegge was able to take a high shot left and score with the assist of NKU midfielder Kyle Healy with only 32 seconds left in overtime against Detroit Mercy, sending his teammates and fans into pandemonium as the Norse secured the victory.

“I ran up top, Kyle put a great ball to me and just flicked it on in.” Hegge said.

Hegge was able to secure a necessary two game win streak in the Horizon League conference by scoring his second goal of the season. His first goal came on Oct. 2, during NKU’s last win over Green Bay on the road in Horizon League play.

“I think it was a necessity,” head coach Stu Riddle said on Saturday’s win. “We needed three points tonight and we need three points again on Wednesday, so it’s a step in the right direction.”

Defense was a major factor in Saturday’s win. NKU’s defense dominated the first half allowing only one shot on goal. Detroit Mercy ended the game with 12 shots, while NKU saved all three shots on goal.

“Any time you make a number of changes on to the starting 11, it’s going to mess things up a little bit,” Riddle said in comparison of the defense from last game against East Tennessee State to Saturday’s game against Detroit. “They were back to their best again tonight.”

NKU allowed 16 shots from East Tennessee State. Six of these shots were shots on goal, with the Norse only saving three.

Not only was the defense able to step up, but the offense was able to step up as well on Saturday. The Norse were able to take 15 shots in Saturday’s game, eight of which were shots on goal.

“We knew if we could get in down on the floor, move it around, we knew chances would open up.” Hegge said on the ball movement into overtime. “They did open up for us there at the end.”

A conference win is always important during the season. Saturday’s game against Detroit Mercy put the Norse record at 3-3 in their conference and raised them to 6th place currently.

“It’s huge. It’s huge,” Hegge said on today’s win. “We needed this one so bad to get our season back on track.”

After the win against Detroit Mercy, NKU will  face off against their next conference opponent IUPUI on Wednesday, Oct. 13.

Wednesday’s match will kick off at 7:00 p.m. at NKU Soccer Stadium.

For now the Norse will be looking to rest their players.

“We were in Green Bay last week, we were in Chicago a few days before that. There’s been a lot of travel, a lot of time on buses. So it’s just recovery, rehab, and making sure that we’re 100 percent fit to go,” Riddle said.