Norse come up empty in 1-0 loss against Robert Morris 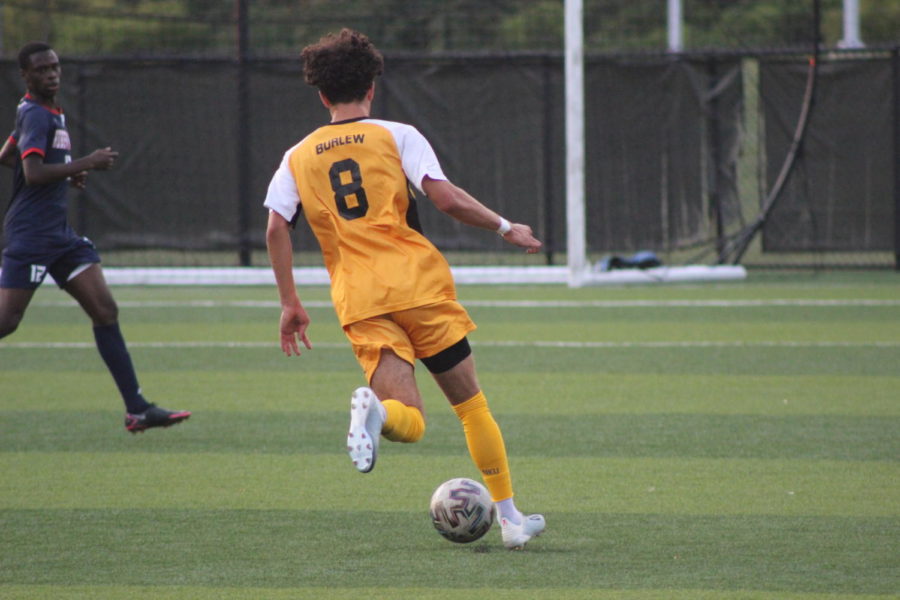 It was a frustrating night for the Northern Kentucky men’s soccer team on Saturday, as the Norse recorded 15 shots, but failed to register a goal, falling to the Robert Morris Colonials 1-0 in the Horizon League conference opener at NKU Soccer Stadium.

“It just wasn’t good enough across the field, you can’t have 15 shots at home and not even look like creating a chance to score really,” head coach Stu Riddle said. “We’ve got a long, hard look in the mirror to do together and then we’ve got a lot of work to do before we go to Fort Wayne next week.”

The match was an extremely physical one, as both the Norse and Colonials were aggressive in jostling for the ball or for position, resulting in multiple skirmishes in which players from both sides needed to be separated. A total of three yellow cards and 18 fouls were called throughout the contest.

“I think at times we weren’t winning first and second balls and I think that was a big changer in the game tonight,” senior defender Sam Slocum said.

Partially as a result of the physicality displayed by both teams early on, the match remained scoreless for much of the first half, with the Norse holding the advantage in shots and shots on goal. However, in the 39th minute Robert Morris midfielder Bryan Akongo was able to fire one of the Colonials five shots of the first half past NKU goalkeeper Daniel Bermingham, giving RMU the lead in what turned out to be the decisive goal.

Aside from Akongo’s goal, the back line of the Norse was able to hold the Colonials in check, as RMU recorded just four shots on goal, three of which were saved by Bermingham, including one of the most athletic plays of the evening in the 78th minute, as Bermingham dove to his right and went full extension to save the shot and keep the match within reach for NKU.

For Riddle and his team, the frustrating aspect of Saturday night’s tilt came not on the defensive side of the ball, but on the attack, as the Norse failed to record a goal after scoring eight during Tuesday’s lopsided victory over VMI.

The Norse recorded 15 shots in the match to RMU’s 10 and collected two more shot opportunities on goal than the Colonials, though RMU was afforded seven corner kicks to NKU’s four. Regardless, the Norse were unable to record the equalizing goal in the second half, due in part to several clutch plays by RMU goalkeeper Mike Zolnierczyk, who had six saves in the match.

“We gave up one moment that cost us the game effectively, but again, you can’t have situations where you got 15 shots, when we had the attacking prowess that we got and not scoring a goal,” Riddle said. “The back line was fine, goals like that are going to happen, but we need the guys at the other end of the field making sure that they mop that up for them.”

After an intense battle during the opening match of the Horizon League conference schedule, the Norse will not play again until next Saturday, when they travel to Fort Wayne, Indiana and battle the Mastodons of Purdue-Fort Wayne, a team that is 2-3 this fall.

“I think the training this week is going to get a little more intense, just because people are angry, people want to prove themselves now in situations like this,” Slocum said. The intensity never drops with this team, it’s just keeping it for a full 90 minutes and keeping it in training, for a whole training, that needs to continue.”

Going into their second conference match of the season against the Mastodons, Riddle expects another difficult challenge for the Norse, on the road in a difficult place to play.

“They got a new coach last year, he’s done a great job with them, it’s a tough place to play, the grass is normally thick and long, and it’s obviously different from the turf we play on here, so it’s going to be another tough game like they all are in this league,” Riddle said.