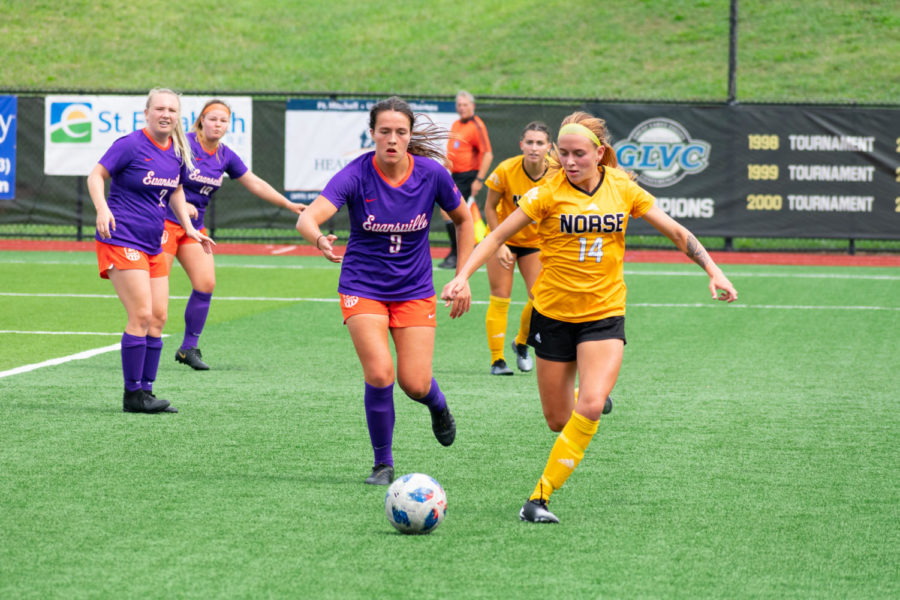 NKU's Lindsey Meyer (14) chases down the ball against Evansville. Meyer scored the Norse lone goal of the match on Sunday.

In the 11 games that the Northern Kentucky women’s soccer team played last spring, just three went to overtime, including the Horizon League Tournament championship that was decided by penalty kicks.

Through the first six games of the 2021 fall season, a whopping four have gone to overtime, with Sunday’s 1-1 draw against the Evansville Aces the latest in a string of intense matches to open the campaign.

The Norse have posted a 1-1-2 record in the four contests decided by overtime, as Sunday’s tie marked their second consecutive match that ended in a draw. The Norse tied Bellarmine on Thursday, 0-0.

“These are obviously disappointing moments for us, and I know our players are disappointed, their effort is there, the right ideas are there, but the execution is not and so it’s still early enough in the season where we can clean up a lot of things,” head coach Bob Sheehan said.

The Norse got the scoring started in the first half on Sunday, as junior midfielder Lindsey Meyer fired a shot past Evansville goalkeeper Michaela Till off assists from Kayla Wypasek and Kaya Vogt in the 27th minute, giving the Norse their first goal since Aug. 26 against Dayton.

“It feels really good to score, it was off a great pass from Kayla and I hope to get a few more this season,” Meyer said.

NKU would hold that 1-0 advantage for just over five minutes, as Evansville’s Emily Ormson took a pass from teammate Abbi Lenk and snuck it past NKU goalkeeper Mimi Stines, evening the score at 1-1 on her third goal of the 2021 fall season.

Despite dangerous opportunities throughout the rest of the match on both sides, the score would remain the same the rest of the way, as the Norse now stand at 1-3-2 overall on the season.

“We have ended with a lot of losses and ties in the past few games, we’ve just struggled connecting the final ball, but we’re getting better every day and the non-conference games have set us up to do better in conference play, so it’s coming,” Meyer said.

Much like in the match against Bellarmine, the Norse outshot Evansville, 15-12, though the Aces did record more shots on goal than the Norse by a slim 7-5 margin, including two in the second overtime period that took athletic plays from Stines to save and keep the score knotted at one.

Despite the low number of shots that the Aces were able to record on the goal, Sheehan believes that there is still plenty of room for growth out of a Norse defensive unit that has allowed just one goal since their 3-0 loss to Louisville back on Aug. 29.

“I think we take pride in how we defend, obviously we made some mistakes today that almost cost us, it cost us a goal certainly and I still think there’s a lot of room to grow on the defensive side of the ball,” Sheehan said.

With just one non-conference game remaining for the Norse, a late Thursday afternoon match against Ohio on the road, the Norse are looking to become much more consistent with their level of play, and continue to fine tune the technical aspects of the game as well.

Part of improving in those areas will be getting the team back to full strength, as the Norse have been without several key players at various times through the season’s first six games, including multiple starters. On Sunday, defender Lily Menssen and midfielder Sofia Wilmes, two regular starters for the Norse, did not play for the second consecutive match.

“We don’t make excuses, I think we have to do better in a lot of areas, but I do think that when we get our team back fully, and we are able to train as a team, I think there’s really big things ahead for the team,” Sheehan said.