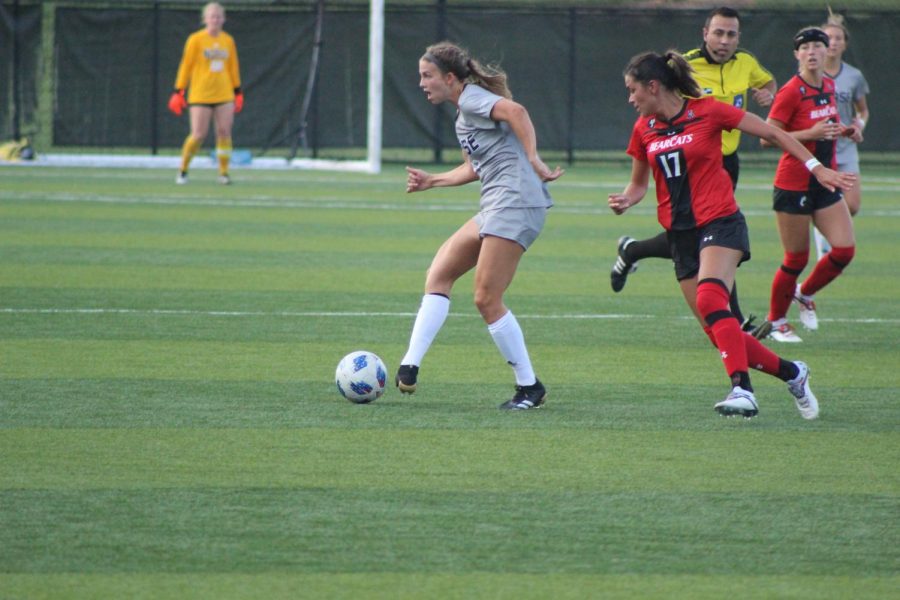 NKU forward Annie Greene dribbles the ball during NKU's 2-1 loss to Cincinnati on Thursday. Greene scored the lone goal for the Norse on a penalty kick.

Thursday night’s season opener for the women’s soccer team was the fourth time that the Norse have met the Cincinnati Bearcats on the pitch, in what is known as the Riverboat Rivalry in the tristate.

However, the Norse will have to wait for the fifth meeting between the two teams to try to grab their first win of the all-time series, as the Bearcats used a pair of early goals to defeat Northern Kentucky and improve to 4-0 in the series in front of a packed crowd at the NKU Soccer Stadium.

In the ninth minute, Cincinnati senior Vanessa DiNardo received a corner kick and headed it into the net, pushing the Bearcats ahead 1-0.

Two minutes later, the Bearcats were on the board again, courtesy of sophomore Lauren Bastian, who fired a shot from just outside the penalty box arc, giving the Bearcats insurance in a 2-1 victory.

“Give credit to Cincinnati, Neil (Stafford) is a great friend of mine, he’s an incredible coach and he has an incredible program, so give credit to them. They came out with energy and put two early goals in, which was the difference in the game,” NKU head coach Bob Sheehan said.

In the 71st minute, with the Norse trailing 2-0, junior forward Annie Greene took a penalty kick following a foul on Cincinnati’s Brandi Thomsen and after knocking off the crossbar, the ball snuck past Cincinnati goalkeeper Anna Rexford, putting the Norse on the board.

“It was obviously a team effort, I was just there to put it in the net,” Greene said.

Despite the loss, Sheehan was optimistic about the team’s performance and the heart that the Norse showed to fight back.

“I can’t be any more proud of a group of young ladies. What they demonstrated here, we outshot Cincinnati in the second half, I thought in many ways we outplayed them in the second half and for the short roster that we have, I can’t say enough,” Sheehan said.

After the Bearcats outshot the Norse 8-2 in the first half, the Norse were able to rebound and outshot Cincinnati 5-4 in the second half, holding Cincinnati to just one shot on goal in that time period.

Cincinnati brought a physical style of play to the match on Thursday, but Sheehan was proud of the way that his team handled that pressure and physicality.

With full capacity once again allowed at NKU Soccer Stadium, both Sheehan and Greene thought that the energy inside the stadium was electric.

“The energy was incredible and it’s always nice to have fans, they really brought the energy today, our team, it was all heart tonight, so I’m proud of it and really thankful that everyone could come out and support us,” Greene said.

The Norse will look to pick up their first regular-season victory on Sunday as they face Eastern Kentucky at NKU Soccer Stadium. Kickoff is set for 7:00 p.m.

“Another very physical team, another team that’s going to play hard, commit to the game, and obviously we have a short window here to prepare our team,” Sheehan said.