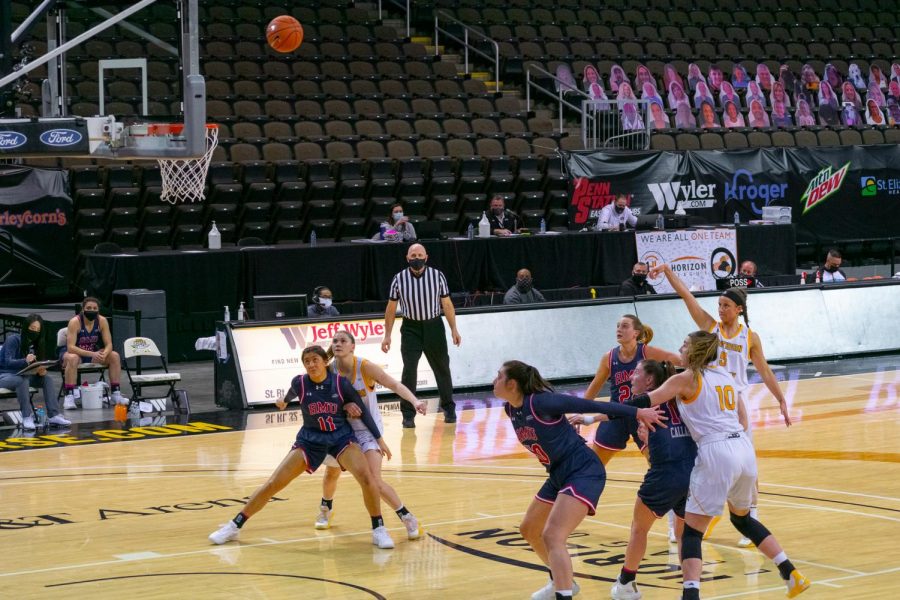 Lindsey Duvall shoots a free throw during NKU's win over Robert Morris in the first round of the Horizon League Tournament on Thursday.

There is an old adage in basketball that goes “it is hard to beat a team three times in a year,” but the Northern Kentucky women’s basketball team did not seem to let that affect them on Thursday night, cruising to a 68-54 victory over the Robert Morris Colonials in the first round of the Horizon League Tournament at BB&T Arena.

The Norse played the Colonials twice this season back in December at BB&T Arena, sweeping the Colonials in the two-game series, including a 61-33 annihilation in the first game. The wins were the first of seven in Horizon League play for the Norse.

On Thursday, redshirt junior guard Lindsey Duvall continued the pace that she has been on since the very first game of the campaign, dropping a career-high 29 points, while tying her career-high with 14 rebounds. Senior forward Kailey Coffey scored 10 points, grabbed seven rebounds and dished out three assists. Sophomore guard Ivy Turner also collected 10 points.

“She’s in the gym first, she’s out of the gym last,” Head Coach Camryn Whitaker said about Duvall. “There’s a reason that she’s put up double digits in every game that we have played, and I’m just so proud to have her here and part of our program.”

The Norse got off to a slow start offensively, recording just three points through the first eight minutes of action. NKU made just one of their initial 11 field goal attempts, including a few layups, though several were contested by an RMU defender.

The second quarter was an impressive turnaround for the Norse, though. Behind Duvall, who had nine of her 14 first half points in the second quarter, the Norse grabbed the lead from Robert Morris, out-scoring the Colonials 21-8 in the quarter.

In the second half, the Norse continued to shoot efficiently from the field and score in a variety of ways against Robert Morris’s defense. NKU was able to establish a strong interior presence on Thursday, collecting 38 of their 68 points from inside the paint.

One similarity to the first game between these two teams that took place back on Dec. 12, was the Norse playing stifling defense on Robert Morris.

“Our defensive intensity was what really sparked that run we made in the first half, and got us going,” Whitaker said.

On Thursday, Robert Morris eclipsed the 33 points that they mustered two months ago, but their shooting performance remained dismal, especially from three, as RMU shot just 19.0 percent on their attempts from beyond the arc.

“How you practice is how you play, and us getting after it in practice has really tremendously helped us,” Duvall said.

Junior guard Esther Castedo led the Colonials with 21 points, while also pacing the team in steals with three. Freshman forward Sol Castro had nine points and seven rebounds in the loss.

With the victory in the first round, the Norse now advance to the Horizon League Tournament quarterfinals on Tuesday, when they are scheduled to meet the top-seeded Wright State Raiders for a chance to play at Indiana Farmers Coliseum in Indianapolis for the semifinals.

The Norse and Raiders matched up at BB&T Arena on Feb.12-13, with Wright State leaving Highland Heights with a convincing two-game sweep.

The Norse are not allowing that recent history to become a factor in Tuesday’s game, however.

“All we have to do is lock in, listen to what our coaches say and just be ready and don’t be intimidated by anybody, because we think we can win every game,” Duvall said.

Tuesday’s game is currently scheduled to tip off at 2:00 p.m. at Wright State. The game can be seen live on ESPN+.