MBB and WBB teams concluded the regular season on Saturday 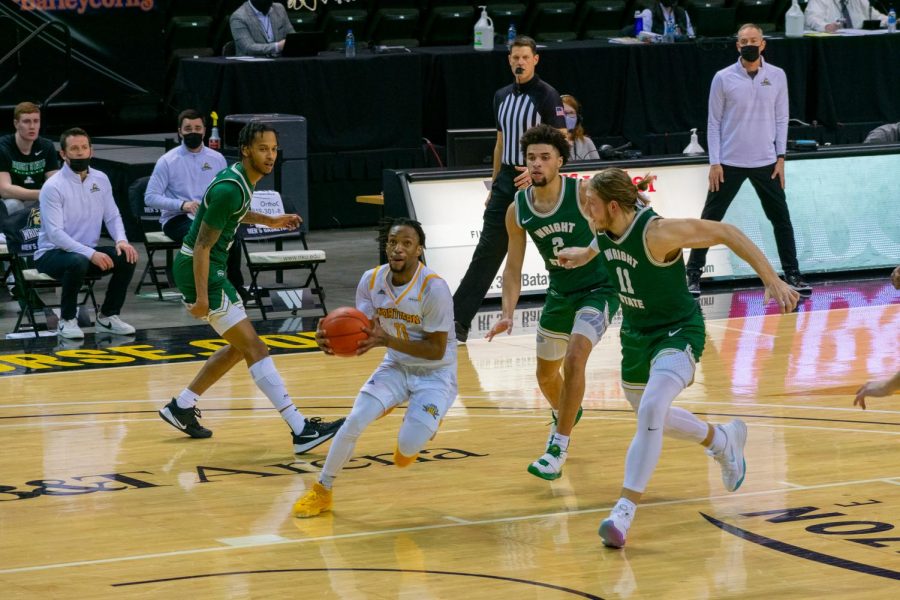 Bryson Langdon drives to the hoop during NKU's win over Wright State on Friday night at BB&T Arena.

On a Saturday evening that represented both homecoming and Senior Day for the Northern Kentucky men’s basketball team, the Norse were unable to repeat Friday night’s heroics against the Wright State Raiders, faltering down the stretch as the Raiders grabbed a 77-71 victory to close out the regular season.

The Norse could not find a way to slow down Wright State’s top three scorers coming into the game, as forwards Loudon Love and Grant Basile, and guard Tanner Holden combined for 57 points in the victory. Basile led the team with 21 points, while also grabbing nine rebounds. Love collected a double-double with 18 points and 11 rebounds, while Holden poured in 18 points himself.

“I feel like the toughest thing is keeping them off the glass. They get so many either offensive rebounds or keep balls alive for their team, they draw fouls by doing that, and Basile especially I think is going to be a terrific offensive player,” Head Coach Darrin Horn said.

Junior point guard Bryson Langdon had another strong game offensively, scoring 16 points while dishing out six assists. Langdon has improved his game tremendously since the middle of January, and it has coincided with the Norse winning eight of their final 10 regular season contests.

“I’m really proud of Bryson, there’s probably nobody I’ve been harder on than him, and he’s responded really well and the growth he has made has been really fun to be a part of,” Horn said.

The Raiders, possibly even more fired up for Saturday’s rivalry game after Friday’s tough loss, came out of the gate hot, jumping ahead on the Norse 17-6 with just under 12 minutes to go in the first half.

WSU was able to establish a solid post presence from the onset, feeding Love and Basile on the blocks, and allowing them to either make a move on one of NKU’s big men, or allow the defense to collapse and dish the ball out to one of the guards to knock down a three. Guard Tim Finke hit a pair of first-half three pointers for the Raiders, while Love finished the half with 11 points and eight rebounds.

But the Norse clawed their way back, collecting 26 of their 34 first-half points in the paint. A 5-0 scoring run towards the end of the first half allowed NKU to trim the lead to just 37-34 at the break.

Ultimately though, the Norse did not have an answer for Wright State’s two big men, Love who stands at 6’8 and Basile who checks in at 6’9. Basile poured in 16 of his 21 points in the second half, including a pair of threes.

“They’re a really good basketball team and those two guys are a big part of it,” Horn said.

To the Norse credit, they did remain in the game for most of the half, and with just over 6:00 minutes remaining, held a 63-59 advantage.

However, when the pressure began to mount, the Raiders did not back down from the challenge. WSU shot 14-18 from the free-throw line in the second half, capitalizing on multiple NKU miscues, including Warrick fouling Holden as he sank a layup, giving the Raiders a 65-63 lead that they would not relinquish from that point forward.

Warrick and Faulkner kept the Norse within five, but the Raiders were able to knock down multiple key free throws in the waning minutes, ultimately securing the six-point victory.

With the loss, NKU concludes the regular season with a 13-10 record, and an 11-7 record in Horizon League play. Wright State will finish with an 18-5 record, and a 16-4 mark in conference play.

While all homecoming festivities were held virtually this year due to the pandemic, there was a pregame ceremony to honor NKU’s lone senior player, Adham Eleeda. Eleeda has spent the past two seasons with the Norse, averaging 5.6 points per game in 2020-21.

Both teams will now turn their attention to the Horizon League Tournament, which will begin on Feb. 25, though each team will have at least a first-round bye to begin the tournament. The first two rounds will take place at the campus sites of the higher seed playing in the game, and the final two rounds will be held at Indiana Farmers Coliseum in Indianapolis.

“We’re getting better as we go into the tournament,” Warrick said. “We have about a week to practice, so we’re just ready for it.”

The Norse enter the Horizon League Tournament as the fourth seed, and will be given a bye directly to the quarterfinals beginning on Mar. 2.

The Northern Kentucky women’s basketball team had lost five straight games entering their final regular season game of the season against Oakland, but were able to snap that streak on the road Saturday afternoon, winning 88-75.

The Norse were led on Saturday by senior forward Kailey Coffey, who scored 27 points and grabbed seven rebounds, along with guards Ivy Turner and Lindsey Duvall, who each collected 16 points in the contest.

The Norse lost Friday night to Oakland, 84-81, but the first three quarters gave every indication that the result was going to end up much more lopsided. Trailing 62-48 entering the fourth quarter, the Norse rattled off 33 points to close the game, with their valiant comeback effort falling just short.

Duvall led the Norse with 27 points on Friday, a career-high for the redshirt junior. Senior forward Grayson Rose notched a double-double with 14 points and 11 rebounds.

With their regular season schedule now concluded, the Norse will turn their attention to the Horizon League Tournament, which will begin on Feb. 25, when the Norse will host Robert Morris for their first round matchup.