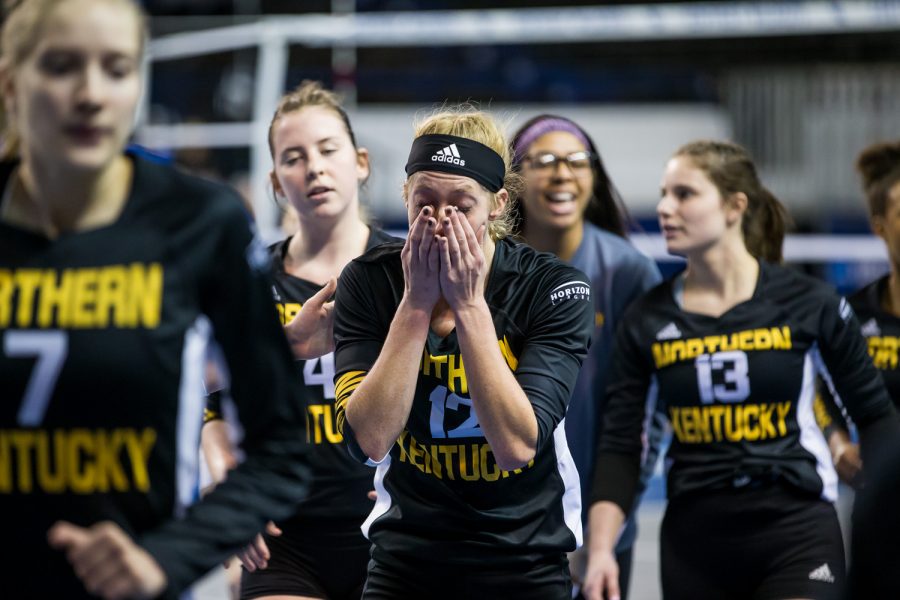 Laura Crawford (12) reacts after the conclusion of the the game against Michigan. The Norse fell in the first round of the NCAA tournament 3-0 against Michigan in Lexington.

NKU’s volleyball team ended their season Friday night against the University of Michigan 3-0, in the first round of the NCAA Tournament. The Norse end their season 19-13 overall. This was Northern’s first run in the big dance, although the night did not end in their favor the Norse are grateful and see the positive in this journey.

“It’s great putting us in this position,” senior setter Shelby Olsen said. “I think that our program having the experience, now being in the NCAA Tournament, going forward I don’t think it’s going to be such a ‘Oh, we made it here.’ It’s an, ‘we’re expected to be here and we’re ready to perform better and win our first round.'”

Senior outside hitter Laura Crawford had 16 digs and five kills and junior libero Ashton Terrill had 13 kills. Redshirt freshman middle blocker Abby Kanakry led in kills with 10 followed by sophomore outside hitter Anna Brinkmann with seven.
Set One
The first few minutes started out strong for the Norse. They were able to stay ahead of Michigan a block by junior middle blocker Bailey Western and Kanakry set the tone to stay ahead. Once it got to 10-10 Michigan went on a four point run. After several service aces from Terrill the Norse came back to tie again at 14. Michigan pulls ahead of the Norse again and finish the set 25-22.

For the set NKU had 10 kills, four of which coming from Terrill. As a team the Norse had 17 digs, led by Terrill again with eight and six from Crawford. Michigan had 15 kills and 18 digs.
Set Two
A big block by freshman outside hitter Reilly Briggs and Western got the Norse into the swing into the start of the game. But several attack errors threw NKU off their game, not being able to put up more than 15 points.

Olsen gained four digs and five assists for the Norse. NKU was able to produce three blocks while Michigan had two.
Set Three
Coming back in the third set NKU started out strong, keeping the game within three points. To tie the game at 12 there was a great rally by the Norse. A kill by Brinkmann assisted from sophomore setter Miranda Wucherer gave the Norse momentum. They tie again at 13-13 and the Norse go on a run with a service ace from Brinkmann and a kill by Kanakry. A kill by Brinkmann from Olsen brought the Norse to their 22nd and final point of the season.

Wucherer and Olsen collected eight assists a piece in the set. For the game NKU had 44 digs as a team with Crawford leading. Michigan produced 46 digs and 44 kills. The Norse only put up 34 kills in the game.

NKU has only been swept by one other team this season, Marshall University.