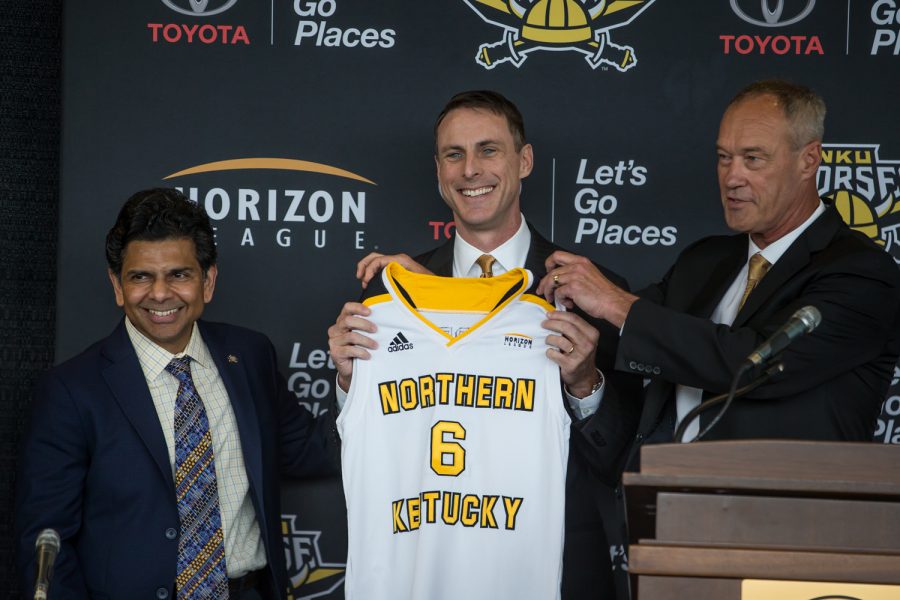 Horn started off his introduction expressing his gratitude for those involved in bringing him to this accomplishment—Shaka Smart, Vaidya, Bothof and his family, just to name a few. Horn begins to lay out his plan for the future of Norse basketball.

“A lot of people say ‘Why do you jump on Northern Kentucky University?’ It’s pretty simple: winning,” Horn said. “That’s what we’re all here for: winning. This is a program that has won, has a tradition of winning, it’s winning now. It can continue to win and win even bigger. That was huge. There’s a shared vision … not only with our athletic department, but maybe even more importantly, our university.”

Horn discussed his plans for success not just on the court, but for the student athletes going through his program. He expresses not just successful basketball careers but “hopefully pro basketball career, get degrees and become better husbands and fathers and professionals.”

“Player development was a huge point in mind,” Tate said. “Looking at the players that he’s coached before was a huge point as well. Players like D. Wade … I know he coached Courtney Lee, Mo Bamba … Jared Allen. So, he’s definitely done his part with the developmental piece. … and just his point on how he doesn’t want to play position basketball. He wants to teach players how to play the game. I feel like that’s a huge point that a lot of coaches forget honestly.”

Horn directed his attention to the NKU community, asking them to make BB&T Arena a place that’s hard for other teams to come play. He feels the energy and momentum at BB&T Arena is great, but there is another level that can be reached.

Horn looks to hire a coaching staff that he’s worked with before for he believes “familiarity in that is important” to hit the ground running. He’s also working on getting the NKU commits that decommitted to come back, he understands that they were “being recruited pretty hard by other people.”

Vaidya went on to discuss how he sat in on several top candidate interviews and the principles he looked for in the next head coach. Vaidya discussed how Horn had matching ideals and qualities.

“We really talked about where NKU is in its history, and it’s trajectory,” Vaidya said. “And what this position means. This is as much a face of the university as anyone else. You have to be a champion, an advocate, a supporter, an ambassador of NKU, not just the basketball program; Coach Horn completely embraces that notion.”

Bothof spoke next, echoing the same sentiments stated by Vaidya. When it came to the search Bothof explained how the basketball teams input helped create their profile in finding the next coach.

“This is kind of the profile we left with, along with all the other priorities that we have within our department,” Bothof stated.“They wanted a leader with high energy and someone who is extremely trustworthy. They wanted a leader who would continue to make them feel like they were the best prepared team on the floor.”

Bothof felt these aligned “extremely well with the qualities found in Darrin Horn.”
MORE ON COACH HORN
Coach Horn is a Glasgow, Kentucky native with roots in the Kentucky area he’s excited to move to an area that feels like home. He’s an alumni of Tates Creek High School in Lexington, Kentucky and graduated from Western Kentucky University ‘95.

He had a coaching hiatus, where he had the chance to be a color analyst of ESPN and the SEC Network. By taking this hiatus, he learned more about the game. Horn had the opportunity to sit in on practices, pregame walkthroughs and workouts with “some of the best coaches in the business.”

“It gave me an opportunity to take in, a lot of not only new knowledge,” Horn said. “But helped me kind of reshape what I think is really important and valuable and maybe the best word is essential to having a successful basketball team in program.”

Horn looks to officially move into the Cincinnati area over the summer once things are squared away with his two children, Caroline and Walker for the school year. Also important to note that Horn is in fact a Skyline Chili fan.