What it takes to be an NKU Cheerleader 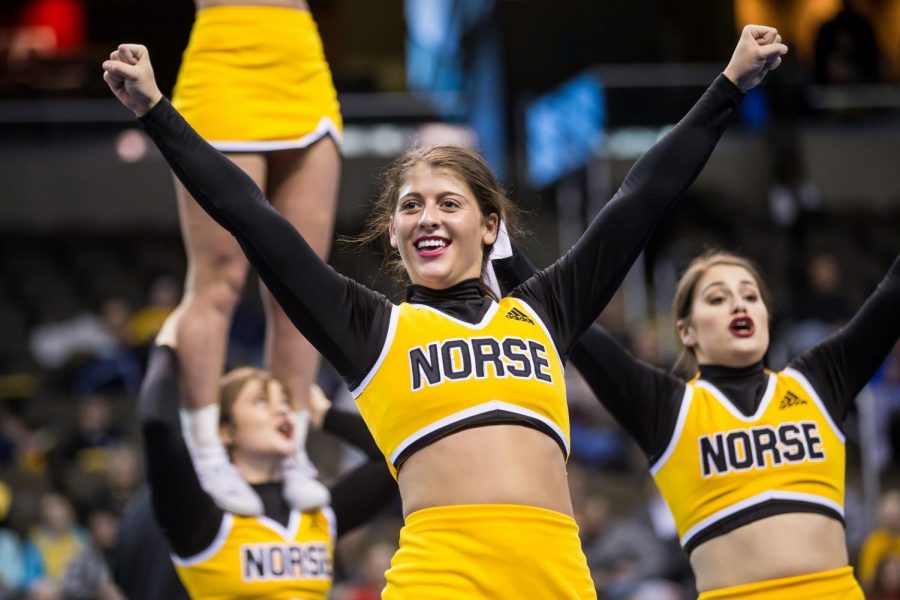 What sport encompasses heights, flips, jumps, potential balls hurtling toward you and lifting other people all while remaining smiling and energized? None other than the beast of cheerleading.

NKU’s cheerleading team has made it to national cheer competition stages and it did not come as an easy feat. Lots of preparation, discipline, coordination and physical fitness was needed to get there.

Former Norse cheerleader Shayla Myles-Aaron is the head coach that led them there. Since graduating in 2007, she’s been a part of the coaching staff and in 2011 she moved up to head coach of the cheer team.

Each year they attend camps with teams from all over to gain better knowledge and learn new and/or better techniques. College cheerleading staff and even professional cheer staff guide them in their five day camp to improve their skill.

Time Commitment, GPA
Being a cheerleader takes just as much of a time commitment as any sport. The summer months are slower only practicing one weekend out of the June, July and August months. However, Once the fall semester starts, practice times pick up to three times a week with a duration of two hours.

With practice, community service, games and studying balancing time is a vital part of being on the team.

“I’m a nursing student and so it just takes up a lot of time, you know,” Junior Mica Slone said. “So it is doable. I have done it now for three years now. There’s another girl that graduated this year in nursing. And so I’m just using that as an example. So it’s doable, but it’s difficult.”

This team also has a GPA requirement of 2.0. The team implements study tables to ensure academic success, requiring at least two hours of study tables a week.

Senior elementary education major, Sarah Coffman elaborated on how study tables have become more of a support system for not only incoming freshmen, but for all involved.

“Honestly, a lot of the people on our team have gone through what the freshmen are going through [class wise],” Coffman said. “So it’s basically just a support system. If anybody needs help, we ask questions, we ask our coaches, our coaches are always welcome to help us, they always offer assistance.”

There are scholarship incentives for the team as well. An allotment of scholarship funds goes toward the NKU cheer team allowing them to gift scholarships to each team member. Some members can earn up to $1,000 in scholarship money by exceeding the GPA requirement and meeting team expectations.

As the dates approach the start of Basketball season the hectic schedules ensue. The team splits into three rotating groups for game days to make sure the team still has time for school and other activities.

“I put them into A , B, and C groups, so at least two groups will get off per game,” Myles-Aaron said. “You could technically be out six nights a week if you did every game, and that’s difficult. So what we’ve done is being able to alleviate that pressure. So you can be a human and actually go out and experience the world or just have some more time to study or family time.”

During the month of December— while most of campus is out of school— practice picks up for the cheer team. The weekly practices become practice two or three times a day in preparation for the national competition.

Once basketball season is over, spring semester practice hours changes due to the smaller number of events going on.

Physical Requirement
These practices aren’t just sideline cheers either, what you see at the basketball games are just the tip of the iceberg for them.

“We don’t want to do too elite stuff at the game,” Myles-Aaron said. “Our main focus is just holding the sign and trying to get the crowd to get pumped up, because whatever that energy that the crowd provides, helps our basketball players and then they hopefully win that game.”

All members are capable of doing the “standard requirements” of tumbling with a back tuck, different stunting techniques, such as a straight up extension, toss lib and toss full up. As well as an inversion—which is like doing a tumbling skill into a stunt — while still being able to smile through it all.

What it Means
This team has been more than just another activity for these members. After spending so many hours working together a bond begins to form.

“Everybody comes from different places and we all have different experiences,” Coffman said. “Once we step on the mat, like we’re all a team. We’re all a family and that’s something that I really love about this team, is we can come on to the floor and we can put everything behind this and work on ourselves.”

As a coach of 12 years, Myles-Aaron echoes the sentiment of feeling a familial bond with not only the team, but with the Northern Kentucky community.

“I just love this university and I think ever since I’ve been here, I’ve loved it,” Myles-Aaron said. “Because it’s such a tight knit community. And everybody cares about each other and just the ‘Hi, how you doing, how’s your sport going,’ that people just ask me, that makes me feel part of something big. And I love that atmosphere and appreciate the opportunity.”

Next for the cheerleading team are tryouts. They take place Thursday, April 18 through Saturday, April 20, more information can be found here.

“We’re more willing to add you if you’re a hard worker versus not,” Myles-Aaron said. “Talent doesn’t always win. It’s always what you put forth in the game and we are always looking to expand our team.”