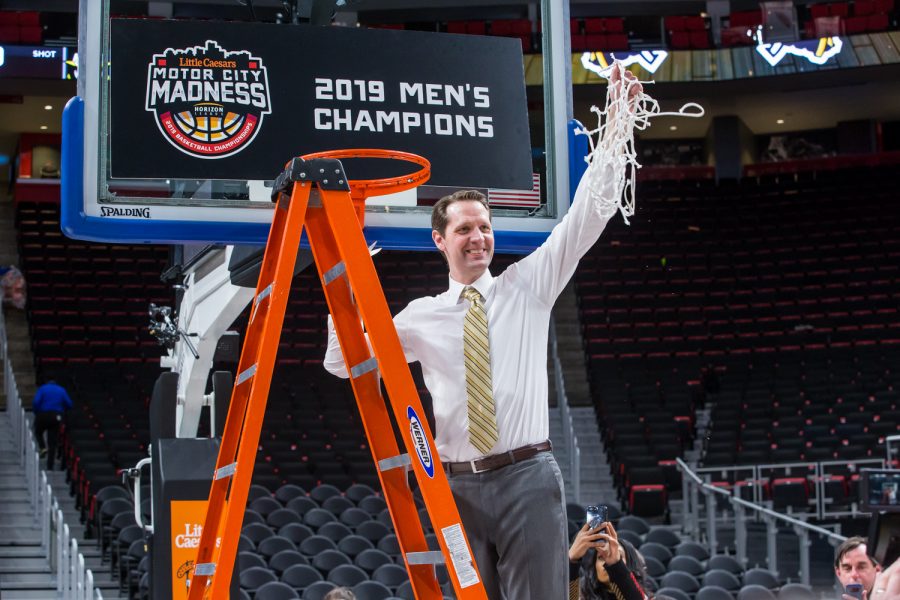 Why are we even asking this question? When you’re talking about the second winningest coach in NKU history who’s taken two trips to the NCAA tournament and an NIT debut in the first three years of Division I eligibility, these types of questions come up.
Short answer
There is little evidence to suggest that John Brannen, NKU men’s basketball head coach since 2015, is leaving for a head coaching spot at Alabama.
How the rumor started
The speculation arose after a tweet by Andy Furman, Fox Sports Radio host, surfaced Sunday night announcing Brannen’s “exit.”

Comments from NKU President Dr. Ashish Vaidya at the Selection Sunday celebration before March Madness began pushed the rumor mill in the other direction, as he jokingly promised Brannen would be there as long as Vaidya is.

“In fact, even before I became president, we had a chance to have a conversation with Coach Brannen, and we are so fortunate to have Coach John Brannen in our midst,” Vaidya said. “He has promised me that as long as I stay at NKU, he’s going to stay right here. Do you see his face? He’s like ‘Oh, gee. I never said that. I don’t know what you’re talking about.’”
What we know
NKU Athletics did not return The Northerner’s request for comment on Brannen’s status.

Brannen signed a contract extension with NKU in summer 2018 that will keep him helming the Norse through 2022.

RELATED: Brannen to lead Norse through 2022

Brannen behind Ken Shields
Former Head Coach Kenney Shields coached the Norse for 16 seasons, compiling a 306-170 winning record over a 39-year career. Shields retired in 2004, leaving the program as one of the top Division II teams in the country.

Brannen formerly served as interim head coach, associate head coach and assistant coach at University of Alabama for six seasons, starting in the fall of 2009-10 ending in the spring of 2015.
About Alabama
Avery Johnson, former Alabama Head Coach, was fired 8 hours prior to the Furman’s Twitter announcement. Johnson’s split from the Crimson Tide comes after a disappointing season that culminated in a first-round exit in the National Invitation Tournament.

Three of Johnson’s four years at Alabama have ended in a first-round exit in the NIT. This season, the Crimson Tide lost all hope of a bid for the NCAA tournament as they were defeated in eight of their last 11 games. The season started off extremely well for Alabama as they upset Kentucky early on in the season and started with a 10-3 record, but the late-season slide to the bottom of the rankings caused a vocal fan outcry, which led to Johnson’s ouster.

Johnson stands to make $8 million from this buyout.

While Brannen has been frequently listed at the top of the pile as far as the best option for Alabama’s coaching vacancy by sports analysts, there is, as of now, no evidence to suggest he’d return there.