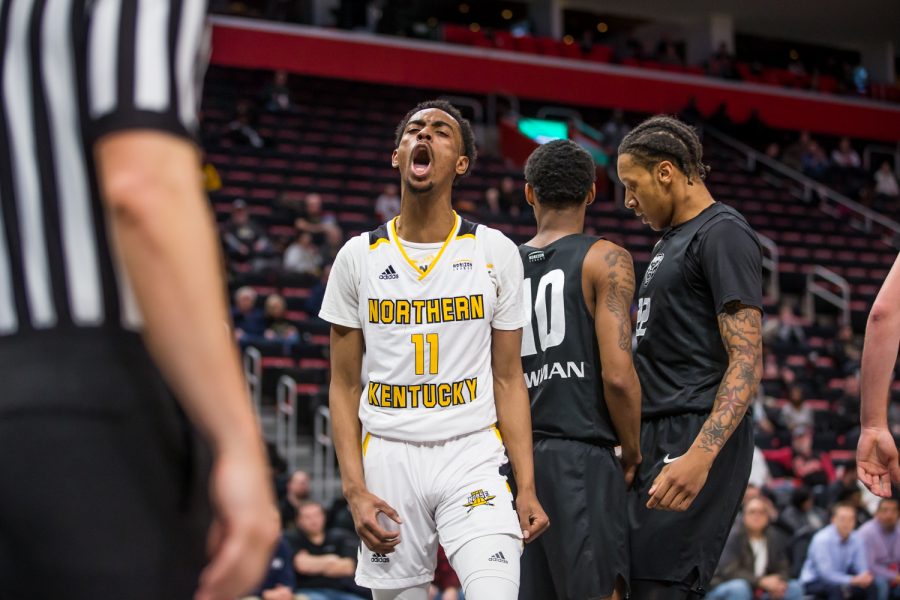 Jalen Tate (11) screams after earning a foul shot off a made basket during the semi-final game of the Horizon League Tournament against Oakland. Tate shot 6-of-18 and was credited with the assist on the game winning three by Drew McDonald (34).

It all comes down to this.

With an NCAA tournament bid at stake, the NKU Norse take on the Wright State Raiders Tuesday night at 7 p.m. for the title of the 2019 Horizon League Men’s Basketball Champions.

“I think it’s great: the Co-Champions League playing each other for the regular season Champions League,” Head Coach John Brannen said. “We both are co-champs to play for this tournament title.”

In the first two tournament games, the Norse started off slow, not hitting double-digits until an average of eight minutes into the game. For Wright State, it’s taken them 5.5 minutes on average. It’s vital in this match-up that the Norse have a strong start, because of the past two games NKU has had to use a second half burst to win.

The last time the Norse faced the Raiders, NKU couldn’t hold Wright State to their usual opponent average of 68.8 points. The 77-81 loss was led by Wright State’s junior forward Bill Wampler with 29 points, and he scored 10-of-14 from the field. The third-best rebounder in the league, sophomore center Loudon Love, had 11 rebounds and 20 points against the Norse that night.

For the Norse, senior forward Drew McDonald led in both rebounds and points with 11 boards and 23 points, followed by junior guard Tyler Sharpe and junior forward Dantez Walton with 16 points and three assists apiece.

The Raiders’ season free throw percentage sits at 71 percent, so keeping fouls in check will be big for the Norse. NKU sits at 10th in the league when it comes to free throws (66.8 percent).

“We obviously know what’s at stake…” sophomore guard Jalen Tate said after Monday’s victory over the Oakland Grizzlies. “I don’t think guys are too high or too low right now. Obviously that was a big shot but we know we have to do.”

However the game turns out, the Norse may still receive a tournament bid of some kind. The winner of the Tuesday night showdown will advance to March Madness. Right now, ESPN projects that the Horizon League champs will play the number two seed, Duke. Whoever loses Tuesday night is eligible for a bid into the National Invitation Tournament, where they will most likely be the 14-seed.

The clash between NKU and Wright State will be broadcasted on ESPN and ESPN2. Tip off is set for 7 p.m. at Little Caesars Arena in Detroit.