Norse came back from 17 point deficit to win the game. 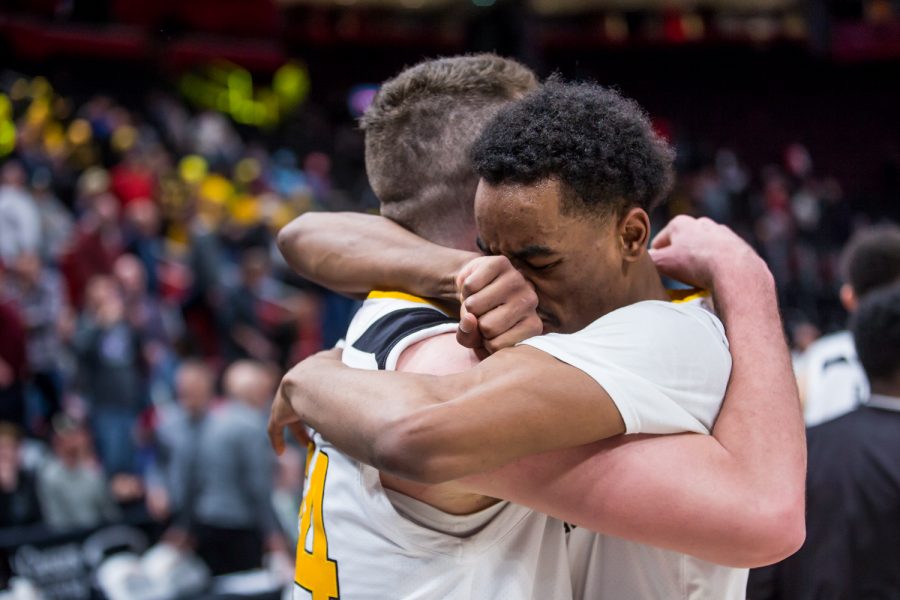 Jalen Tate (11) hugs Drew McDonald (34) after his game winning three point shot during the semi-final game of the Horizon League Tournament. The ball was inbounded with 9 seconds on the clock.

With a last-minute three-pointer by NKU standout Drew McDonald, the Norse advanced past the Oakland Grizzlies 64-63 Monday night in the semifinals of the Horizon League Men’s Basketball Tournament. The Norse will face the Wright State Raiders on Tuesday at Little Caesars Arena in Detroit.

Senior forward McDonald led the night with a double-double of 18 points and 11 rebounds. Redshirt sophomore guard Jalen Tate followed with 14 points and 4 assists. Junior guard Tyler Sharpe contributed 10 points shooting 2-of-4 from behind the arc.

NKU started the game off with a big block by junior forward Dantez Walton. The Grizzlies made a 5-0 run to start the game. Sharpe stopped the run with a charge followed by a two-point goal by McDonald. At the 11:33 mark, McDonald dumped down to freshman guard Paul Djoko for a layup to bring the score to 11-22.

The past two games, NKU has been late to get started with scoring drives, but Head Coach John Brannen feels as if the team has settled into tournament play.

“This is a tournament atmosphere now,” Brannen said. “So, we’ve treated this more as a four-team tournament. So I think getting our feet on the ground here helped.”

The Grizzlies went on a 6-0 run, but Tate stopped it with a coast-to-coast basket to bring the Norse to 13-28. The Norse came down the court on another fast break, and Walton scored the bucket for two. The Norse went on a 28-9 run against the Grizzlies in the last 8:27 of the half. Going into the half, the teams were tied 37-37.

“[We] just keep playing aggressive,” said Tate. “Coach always says we play without fouling mostly when we’re playing aggressive. So, just stand up, sticking to our principles and our habits stuff we do every single day and just knowing that we’ll win out in the end.”

Oakland started the second half with a 4-0 run. McDonald scored the first bucket of the half. McDonald tipped in a basket which brought the score to 41-41. The next possession Tate stole the ball defensively and turns it into an offensive possession. The Norse score and bring the score to 43-41 the first lead of the game with 15:40 left to play.

The Norse gained the largest lead of the second half with 9 points. The Grizzlies cut it down with back to back three point baskets, 61-59, with 1:26 left in play. Walton went to the basket and gained a foul, but he didn’t convert the points. The Grizzlies go down the court to tie 61-61 with 29.2 seconds left in play. With 9.2 left of play the Norse were down two points, NKU inbounded to Tate, McDonald set a pick for Tate and popped to the top of the key. Tate assisted the last second three-pointer by McDonald to win the game 64-63.

“We’re use these quick turnarounds but this one might be a little quicker,” McDonald said. “The reps we’ve done throughout the year preparing every game like a championship game, so we’re just gonna go out there tomorrow and take the court like it’s another game like we’ve prepared all year.”

The Black and Gold will move on to play Wright State University in the Horizon League Championship on Tuesday, March 12 at 7 p.m. The winner of the game will win the title of Horizon League Tournament Champion and an NCAA tournament bid. The game will be broadcasted on ESPN and ESPN2.