Norse fight to take down Detroit Mercy, advance in the tournament

This win is the teams first time meeting in the postseason. 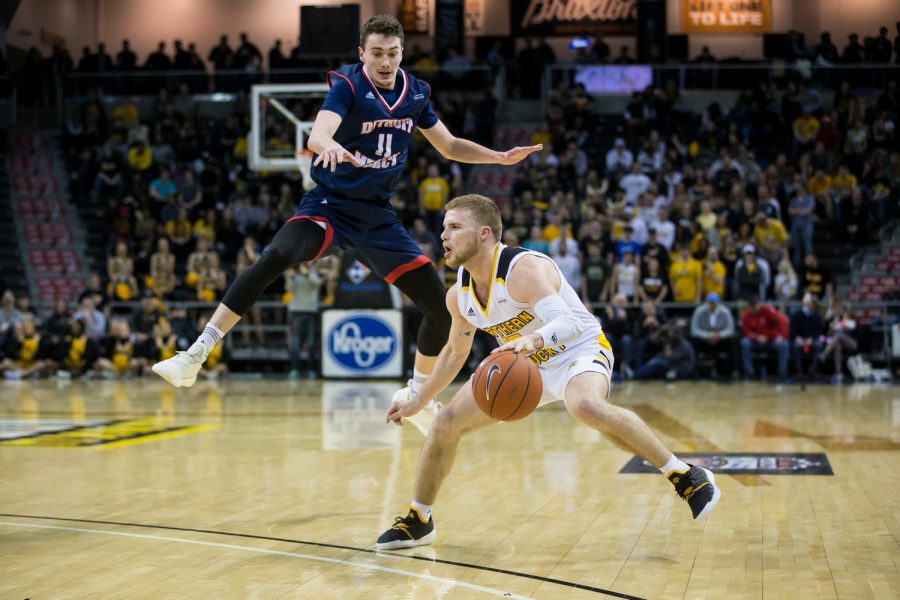 Tyler Sharpe (15) steps to avoid a defender during the Horizon League Tournament game against Detroit Mercy. Sharpe shot 7-of-13 on the night and shot 6-of-12 from three on the game.

NKU men’s basketball team ended Detroit Mercy’s season at BB&T Arena 99-88, Thursday night in the Horizon League Quarterfinals. The Norse advance and will continue post season play. Their record moves to 24-8 on the season and 14-5 in the conference. Detroit Mercy ended with 11-20 overall and 13-6 in the league.

Junior guard Tyler Sharpe led the Norse with 25 points, 6-of-12 from the tree point line and 6 rebounds. Freshman guard Trevon Faulkner added 20 points to the board, followed by senior forward Drew McDonald with 19 points, 5 rebounds and 3 assists. Sophomore center Chris Vogt led the night in rebounds with 8 and contributed 16 points and 2 assists. Redshirt sophomore Jalen Tate led the night in assists with 10 and added 8 points to the board.

There was worry about McDonald’s performance due to a speculated back injury but McDonald reassured that injuries come with the game but will not stop the progress of the team.

“It’s tournament play now, McDonald said. “I mean, bumps and bruises don’t matter. It’s just about wins and losses. And I just want to do everything I could from my team out there tonight.”

The Norse got off to a slow start Wednesday night not scoring for the first two minutes of the game. McDonald opened up the night for the Norse with a three point basket ending the drought. The Norse shots struggled to fall during the first half. Walton opens the night in dunks with a slam to bring the Norse to 5-7 against the titans.

The game continued to go back and forth until the teams 14-14 and again at 16-16. The Titans then went on a 14-0 run with just under 8 minutes left in the half. Sharpe broke the run with a three point basket bringing the score to 19-28. The Norse chipped away at the lead, Walton gave a strong baseline  dunk to bring the score 32-37. The Norse end the half down 40-47.

“I think Chris Vogt did a great job coming in and make himself known in the first half,” McDonald said. “Scoring in the post and forcing them double teams. Then when he did that he had patience to look opposite or just kick the ball out.”

For the half Walton gave two dunks and Vogt added one to the stat. For the half the Norse out rebounded the Titans 19-18. Sharpe scored 12 in the half, with 3-of-7 from behind the arc. The Norse shot 45.5 percent from the field while the Titans shot for 48.6 percent.

“Obviously, we know that this could have been our last game,” Sharpe said. “So, we had that extra motivation to come out take care of business and really hunker down the second half. Mainly it was just keep doing what we’re doing from an energy standpoint, play harder, make it harder on them”

The second half started with a lot of energy from both sides. McDonald opened up the half again with a move in the paint. The Norse go on a 9-0 run, during the run Faulkner contributes four and Sharpe takes a charge with 17:06 left in the half. Sharpe pulls a three from deep to bring the score to 59-55 with 14:10 left.

“I was challenged at halftime by my teammates and coach,” Faulkner said. “So, it wasn’t really about offense. Yes, I scored 20 points. But that really wasn’t the main thing and my job was to stop Davis and do the best I could on him.”

The Norse break open the lead to 10 points with free throws from Tate with 4:50 left in the game. Walton gave a no look assist to McDonald for a three to bring the score to 87-74. McDonald is taken out of the game with one minute left, and is ushered out with a standing ovation from the crowd. Walton brought the score to 99 in style with another dunk. The Norse end the season at BB&T Arena with a 99-88 win over the Titans.

At the end of the game Head Coach John Brannen presented McDonald with the game ball from Saturday, March 2 Green Bay competition, where McDonald broke the school record for all-time scoring. McDonald became the 25th player in Division I college basketball history with 2,000 points, 1,000 rebounds and 250 assists.

“You know, different guys [step up] on different nights, Brannen said. “You’ve got an opportunity to win quite a bit here and want some championships and you just can’t be the same. We gotta have Drew McDonald be Drew McDonald, we gotta have Jalen Tate be Jalen Tate, the guys gotta be able to step up at certain moments during the game.”

Up next, The Norse head to Detroit, MI to play in the Semifinals of Motor City Madness against Oakland. The game is set for Monday, March 11, tip off is scheduled for 9:30 pm and will be broadcasted on ESPNU.