The all-time series is now tied between Youngstown State and the Norse 5-5. 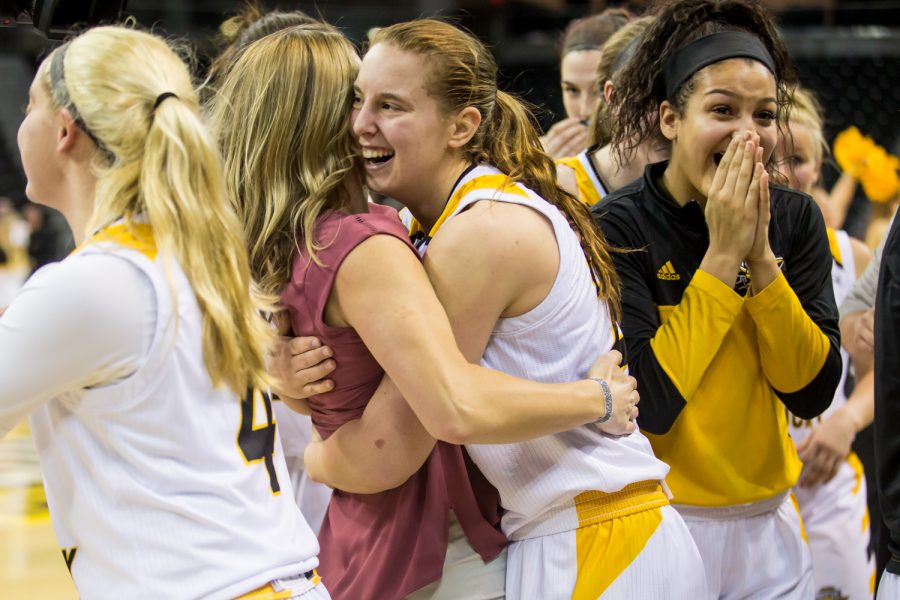 Molly Glick (24) hugs Head Coach Camryn Whitaker after her game winning thee point basket during the game against Youngstown State. The ball was inbounded with 1.0 second on the clock. The basket led the Norse to a 65-62 win over Youngstown State.

Redshirt junior Molly Glick led the charge with 16 points and 4 boards. Glick was 3-of-5 from behind the arc. Freshman point guard duo Taylor Clos and Ally Niece score 14 points a piece. Niece added 5 assists and 6 rebounds to her stat line. Sophomore forward Kailey Coffey led the night in rebounds with 11 and contributed 8 points and 5 assists.

It took the Norse a minute to get into their rhythm. Coffey started the Norse off with a layup, Niece later came down the court and hit a three pointer to put the Norse up by 3. Once the Norse gained the lead they didn’t let up. The Norse ended the quarter up by two, 18-16.

The second quarter started strong for the Norse. Youngstown fouled Clos as she went to the lane, allowing her to make two free throws. The Norse began to struggle a bit and the Penguins went on a 5-0 run that resulted in a 22-26 lead for the Penguins. The Norse got a few defensive rebounds and were able to gain points in transition which allowed them to take the lead back to end the quarter up, 29-28.

For the half the Norse shot 7-of-8 from the free throw line and out-rebounded the Penguins 22-19. The Penguins shot 35.5 percent from the field for the half and held NKU to 31.3 percent.

Clos opened up the second half with back to back threes to put the team up 35-28. Sophomore forward Grayson Rose hit a big three pointer to stretch the Norse lead to 38-32. The Norse went on a 5-0 run to extend the lead again to 45-36. Glick hit her second three of the night to bring the score to 52-43 to end the quarter.

“I had that mentality that they’ve [the team] been trying to get me to have the whole season of staying confident, keep shooting and to shoot your way out of it,” Clos said. “Molly was giving me confidence at halftime, you know feeding me shots right before we went to the bench. I knew that if I came out confident, they’d be confident and we’d have a good outcome and we did.”

Youngstown opened up the quarter with a three point basket but NKU answered with a layup by sophomore forward Jazmyne Geist. Youngstown went on a 6-0 run to close the gap 54-52. Niece took a big charge with 4:40 left in play. Glick hit another three point basket and Youngstown matches to tie the game 58-58. The game tied two more times with 41 seconds left in the game.

The game was tied 62-62 with one second left the it was NKU’s ball under the basket. Rose set a screen for Glick, Niece in bounded it to Glick near the top of the key, Glick catches and releases to get the three pointer off right before the buzzer, and the Norse win 65-62.

The Black and Gold ended the game shooting 53.5 percent from the three point line and held the Penguins to 21 percent, only making 6-of-28 for the whole game. The Norse also held junior forward Mary Dunn to 4 points this games as opposed to their last meet up where she scored 23 points.

“You know she [Dunn] is a phenomenal player,” Coach Whitaker said. “… she got in some foul trouble in the first quarter which limited her minutes and I think really affected her. Which credits our team because a couple of those fouls were offensive rebounds. We had her boxed out, she’s going over the back and we attacked her.”

Up next, the Norse take on Cleveland State Sunday, Feb. 24 for Senior Night at BB&T Arena. The last home game will be a pink out in honor of women who are facing and survived breast cancer. The night will also honor senior guard Taryn Taugher. Tip off is set for 2 p.m. and will be broadcasted on ESPN+.