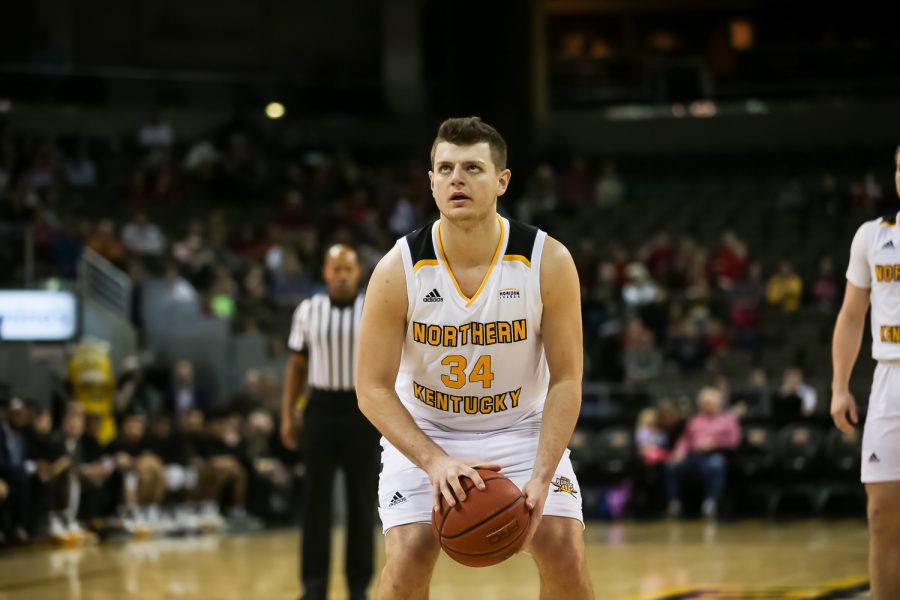 Drew McDonald (34) Surpassed the preview record for number of made free throws during the game against Youngstown State. McDonald now holds the record with 435 free throws on his career.

NKU men’s basketball team defeated Youngstown State 76-69 during Thursday’s game.  This brought the Norse to 21-7 overall and 11-4 in the Horizon League while the Penguins dropped 12-17 overall and 8-8 in the Horizon League. This win not only continues NKU’s home winning streak of 16-0 this season, but continues the streak dating back to last season with 20 home wins.

The first few minutes of the game was close until the Norse went on a 6-0 run which brought  the score to 29-19. The run started with a layup from freshman forward Adrian Nelson, followed by a three pointer by Sharpe and came to an end with another layup by redshirt freshman guard Paul Djoko.  The Norse maintained this lead for the remainder of the half as it ended with the Norse ahead 38-32.

There were three ties and three lead changes throughout the half.  The Norse shot 52 percent in the half from the floor and 50 percent from beyond the arc. They also had a 16-11 rebound advantage over the Penguins.

The Norse started the second half maintaining their lead but the Penguins fought to make the game close with a score of 45-44 with 13:24 left to play.  The Norse fought back immediately earning six points from dunks that got the crowd rolling. Two of the dunks came from sophomore center Chris Vogt while the other came from Tate.

“Offensively and defensively we had to lock in and start getting some defensive rebounds.  They were killing us on the o-boards and just locked in, got back connected defensively and then went down and executed our offensive end.”

“I really think that run was made through the course of the week,” McDonald said.  “Through the grind that we put ourselves through this week, the great practices we’ve had and the execution we’ve been focusing on this week.”

McDonald broke the NKU’s free throw record with a total of 435 free throws by the end of the game. The previous record holder was Craig Conley with 431 free throws. McDonald also has a career points of 1,976, he’s five points away from taking second place on NKU’s all-time scoring list, where Brady Jackson currently resides.

NKU will have their final home game Saturday, Feb. 23, against Cleveland State. The game is scheduled to start at 7 p.m. and will be broadcasted on ESPN3. This is Senior Night for McDonald and graduate student Zaynah Robinson. Head Coach John Brannen looks forward to the game.

“We really need to get our fans out here,” Brannen said.  “This is a pretty big deal; it’s Drew McDonald and Zaynah Robinson’s last game.  If I had enough family members to fill BB&T, we would fill BB&T, but I don’t so bring your family members.”