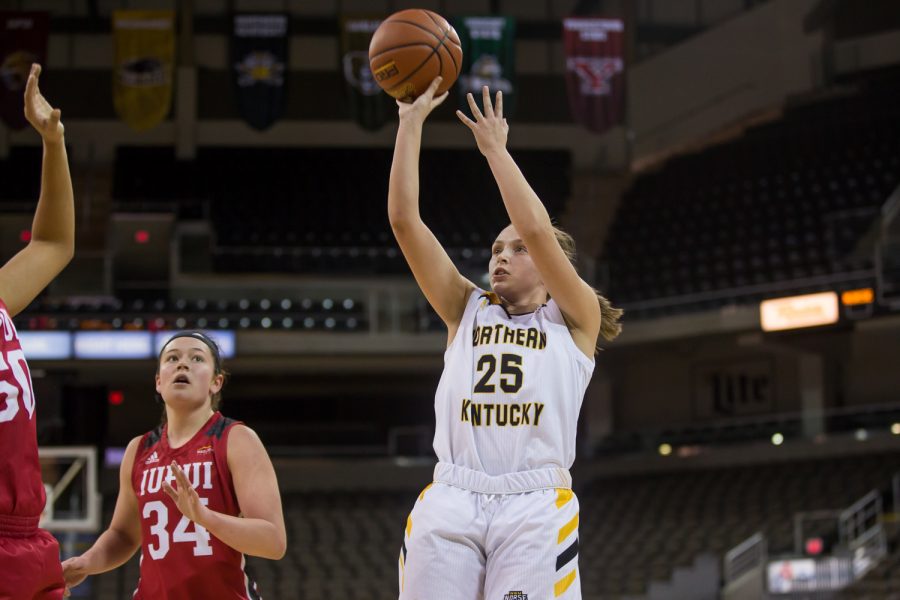 Ally Niece (25) shoots during the game against IUPUI. Niece shot 7-of-12 on the night and had 16 points.

NKU women’s basketball team wins against IUPUI Thursday evening, 60-57  at BB&T Arena. Norse move to 5-5 in Horizon League play and 6-14 overall. IUPUI now sits at 7-3 in the conference and 13-8 on the season.

Freshman point guard Ally Niece led the charge with 16 points and 6 assists. Sophomore forward Grayson Rose followed with 14 points and 8 rebounds, scoring 4 of 7 from behind the arc, a career high for the sophomore.

The first quarter started off slow for both sides with no points on the board for almost four minutes into the game. Clos ended the drought with a layup at the end of the possession buzzer. The Norse eventually found their rhythm and went on an 8-2 run. Niece scored 6 points in the quarter, as a team they shot 50 percent from the field. NKU ended the quarter on top 13-8.

Coffey opened the second quarter strong with a drive to the basket that became a three point play. IUPUI fouled Coffey on her drive which allowed her a trip to the line to finish out the play. The Norse battled to keep the lead, ending the half at 25-19.

“Kailey provides. We asked her to be the leader, and she is so consistent in what she does. And she never tries to do too much. She just plays a game,” Head Coach Camryn Whitaker said.

IUPUI came out after the half and made it a one point game within the first two minutes of the quarter. Rose hit a layup to tie the game up 27-27, which put an end to the 8-0 run for the Jaguars. Rose came back down the court to hit another three. The Norse make an 8-3 run to get back in the lead. The Norse end the quarter up 40-35.

Rose felt as if she had been struggling offensively for a while but against the Jaguars it all came together. “It feels really good, but I’m so proud of our team,” Rose said. “Everybody came in the game, we executed the game plan and it was just a great win for us.”

To start out the fourth quarter IUPUI made their way back into the game to tie, but Molly Glick hit a layup with six minutes to go to put the Norse back on top by two. The lead changed twice during the fourth quarter, Clos hit a three with 1:30 left to bring the score 55-54. The Black & Gold went on to fight for the lead, down to the last second. The Norse came out on top with the help of Glick making free throws. Norse win 60-57.

“I think overall, we just had a really good effort and our mindset was that we were going to come in and try and get an upset,”  Niece said. “And I think that overall like coach said, we had to win each five minute segment, which I think is really a big thing to our team. Just taking it like one step at a time, keep the same mindset and refocus after each five minutes.”

Up next, the Norse face UIC Saturday, Feb 2. Tip off is set for 2 p.m. at BB&T Arena. The game will be broadcasted live on ESPN3.