Ally Niece has made 15 consecutive free throws in the last 4 games. 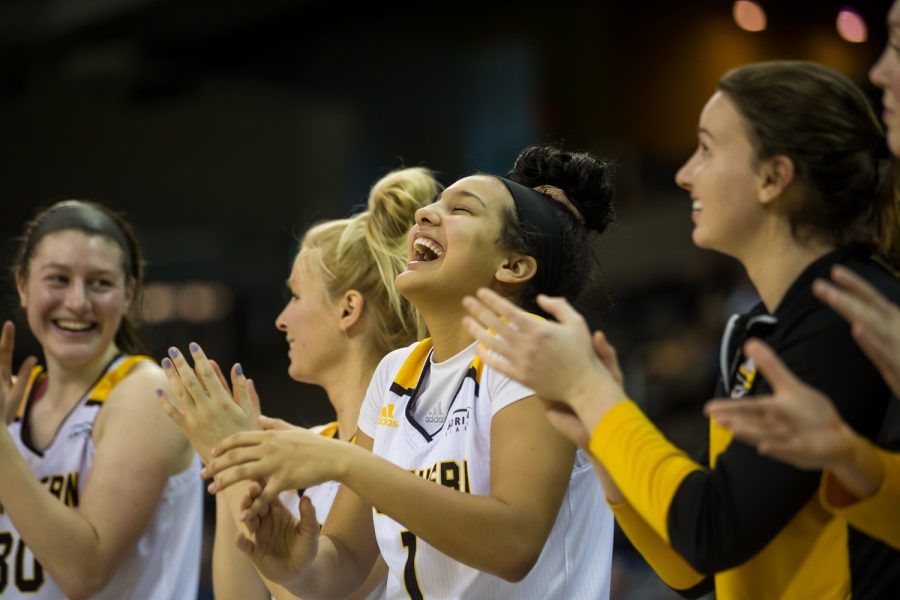 NKU players cheer after a point made during the game against Oakland. The Norse defeated Oakland 72-50.

NKU Women’s Basketball team faced off against the Oakland Golden Grizzlies and defended their home-court with a score of 72-50 win. In conference play NKU now stands at 5-4, while Oakland women’s basketball team drops to 1-8.

Freshman point guard Ally Niece led the group with 17 points, sinking 6 of 6 from the free-throw line. Redshirt junior Molly Glick contributes 16 points, making 4 of 5 from the three point line, and freshman forward Emmy Souder added 10 points and 4 rebounds to the board.

The Norse were up at the half by nine points with a score of 33-24. Niece scored 15 of her 17 points during the first half.

The Norse also had big contributions from the bench, they added 24 points with help from Souder with 10 points and senior guard Taryn Taugher with 2 points and a lot of defensive pressure.

Head Coach Camryn Whitaker felt that her bench had a very productive game, “Our players have done a really good job and we have such an unselfish team and I think they all have the mentality that whatever they can help to do to contribute and that’s really positive.”

A big part of NKU’s win was their free throws, “Shooting 88 percent is huge. We got to the foul line which is something we continue to emphasize on,” Whitaker said. NKU out rebounded Oakland by 21 boards during the game and had 15 assists to 21 shots made.

The Norse fought hard for this win and Coach Whitaker was very happy with her team.

“It was one of the first games I felt our offense really flowed better.” The Norse ended the night shooting 41 percent from the field.

The next game for the Black & Gold will take place on Thursday, January 31 at 7 p.m. defending their home court against IUPUI. The game will be broadcast on ESPN+.