Norse score 18th win of the season against Milwaukee

Two of the Norse score a double-double to lead the team win. 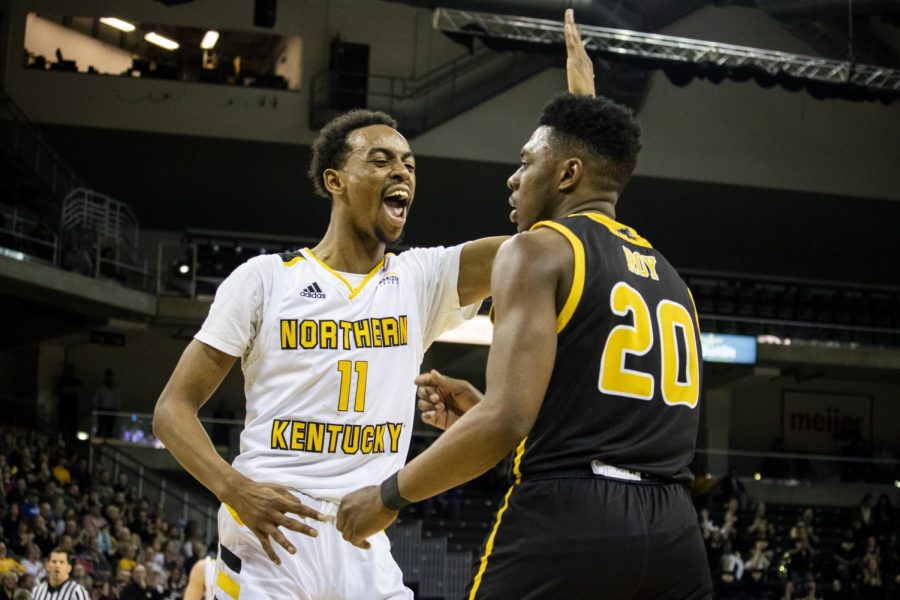 NKU Men’s basketball team tamed the Milwaukee Panthers Saturday night at BB&T Arena, 73-60, adding to their streak of Horizon League wins. NKU now sits at 8-1 and 18-4 overall. Milwaukee drops to 9-13 overall and 4-5 in the league.

Senior forward Drew McDonald had the hot hand recording 30 points, including 6 of 10 from behind the arc and 13 rebounds. The 6 three pointers were a career high for McDonald. Redshirt sophomore guard Jalen Tate matched McDonald’s double-double with 13 points and 10 rebounds of his own. Also in double figures for the Norse was junior forward Dantez Walton with 12 points, and junior guard Tyler Sharpe with 10 points.

The first half was lackluster for the Black & Gold as they went into the locker at halftime trailing 34-30, from the field the they only shot 30 percent. The Panthers were out-rebounding the Norse 24-18 at halftime, while also collecting seven offensive rebounds compared to NKU’s three.

“Coach challenged us at halftime,” McDonald said. “I got a bad technical just before the half, that was on me, they went on a 5-0 run. I knew I had to step it up in the second half.”

In regard to the team’s poor first half Jalen Tate had this to say, “We came in there (locker room) and we didn’t feel like ourselves, there was a sluggish feeling going into halftime, we were still right there and knew if we picked up the intensity we would be able to control the rest of the game.”

The Norse opened the second half on an 18-2 run, to turn the four point deficit into a 12 point lead, going up 48-36 with 13:47 remaining. The Black & Gold stretched that lead to 64-44 before the Panthers were able to claw back to within 10, but they would get no closer.

Head Coach John Brannen was pleased with the team’s second half performance. “This was really a tale of the second half, I thought we were as good defensively in half court in the second half as we have been in a few weeks. It is a testament to all of our guys, and to Coach Dwyer who made a great adjustment at halftime.”

The Norse shot 50 percent from behind the arc for the game and held the Panthers to 36 percent. The Norse were also able to put up 22 points within the paint while Milwaukee had 18.

“We beat a really good basketball team tonight,” Brannen said. “They’re tough, they’re physical, it’ll be a real challenge to go back up there at the end of the year.”

The Black & Gold now have five days off to recover from a recent wave of injuries. “We’ve got some guys that are beat up so we will take some time off,” Brannen said.

Once that time off is up the Norse will travel to Indianapolis to take on IUPUI for the second time this season. Last time out against the Jaguars the Norse were victorious (92-77). The game is set to tip Friday, Feb. 1 at 7 p.m. EST. The game will be broadcast on ESPN+.