Chris Vogt had an impressive career high in points, rebounds, and assists for the night. 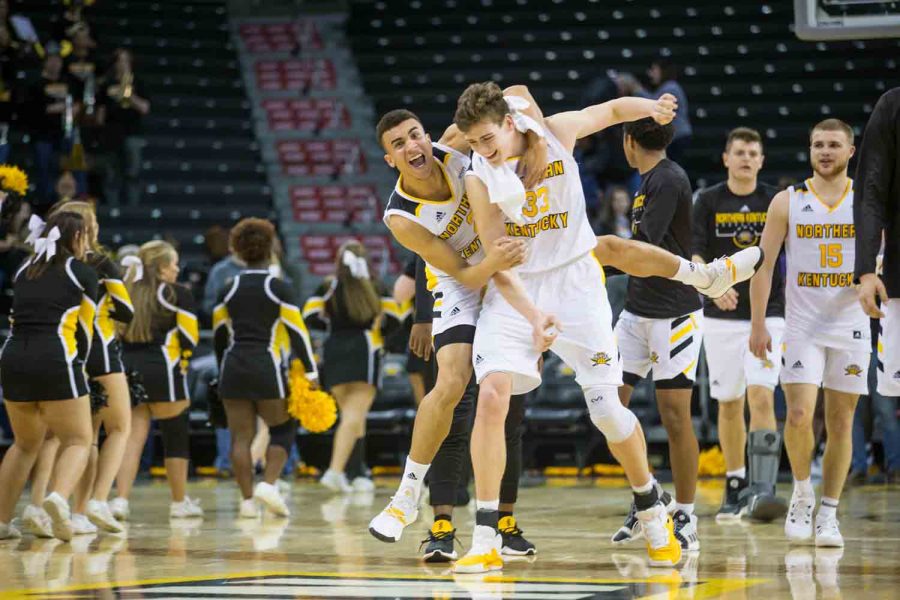 Paul Djoko (2) congratulates Chris Vogt (33) on his performance during the game against Green Bay. Vogt lead the team in scoring with 20 points.

With 8 minutes remaining in the first half senior center Drew McDonald left the game with a leg injury, then Vogt was inserted into the lineup and became the spark the Norse needed.

“I knew I had to step up when I saw Drew go down, and it was just a next man up mentality,” Vogt said.  “My teammates did a great job of getting me the ball.”

“We all told Chris in the locker room that he just figured out what we already knew,” Head Coach John Brannen said. “We knew what kind of player he is, and now he has to use this to build on the future.”

It was unclear the extent of McDonald’s injury, Coach Brannen was not able to provide an update on the matter.

The Norse started the second half with an 8-0 run, but the Phoenix answered right back with a 13-0 run of their own to cut the NKU lead to 66-57, with just under six minutes left to play. NKU pulled away with a closing run to seal the win 87-65.

NKU out rebounded Green Bay 44-28 and racked up 24 second chance points. Along with the success on offense, NKU held Green Bay on defense. Green Bay shot 38 percent from the floor and only 20 percent from beyond the three-point line.

Coach John Brannen credited the bench with the way the team closed the game. “With Drew going down and Jalen Tate not having his best game, the bench stepped up and that’s what a program is supposed to do.”

NKU is back at BB&T arena on Saturday, Jan. 26 against Milwaukee. Tipoff is scheduled for 7pm and can be seen live on Fox Sports Ohio.