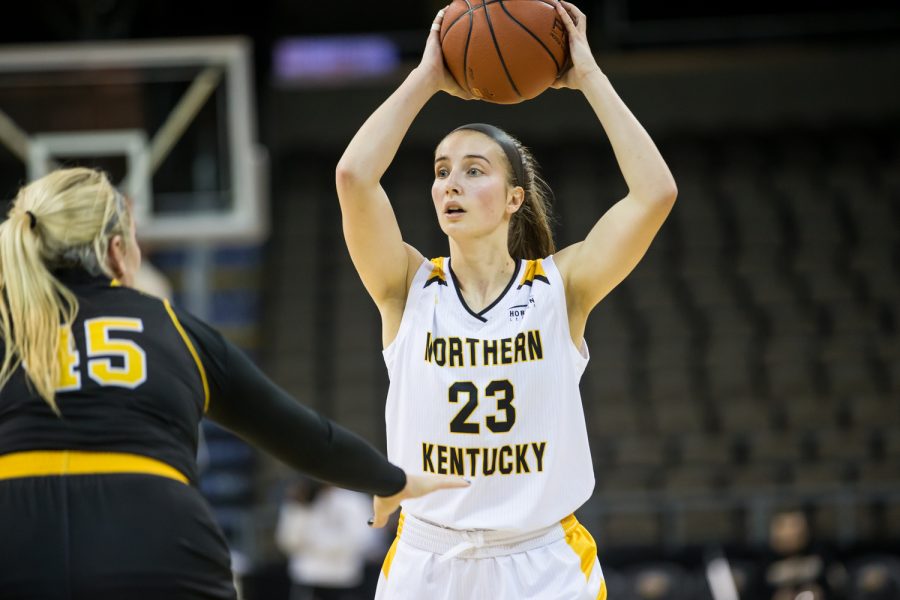 Kailey Coffey (23) looks to pass to a teammate during the game against Milwaukee. Coffey had 10 points on the night.

NKU’s women’s basketball team loses to Youngstown State 77-66. The Norse fall to 3-14 overall and 2-5 in the conference. Youngstown now sits at 14-5 for the season and 6-2 in the Horizon League.

The Norse started off strong shooting at 60 percent, which allowed them to be ahead the first quarter 19-15. The second quarter began with a 7-0 run from the Penguins, the Norse were able to take the lead back by two, ending the half 37-35.

NKU shot 50 percent from the field for the first half and kept the Penguins’ three point percentage down to 33 percent. The Norse out rebounded the Penguins 12-11.

Coming back in the third quarter, the Norse were able to outscore the Penguins and gain a 56-54 advantage. Youngstown State shot 25 percent for the quarter, while NKU shot 46 percent.

In the fourth quarter, the Penguins took off and scored more than double what the Norse scored for the quarter, 31-12. NKU’s shooting percentage fell to 20 percent for the final quarter. The Norse were able to convert 15 points from the Penguins 10 turnovers.

The NKU women’s team falls to seventh place in the Horizon League standings with the loss.

Up next for the Black & Gold is a home game versus Detroit Mercy, Friday, Jan. 25 at BB&T Arena. Tip off is scheduled for 11 a.m. and the game will be broadcast on ESPN+.