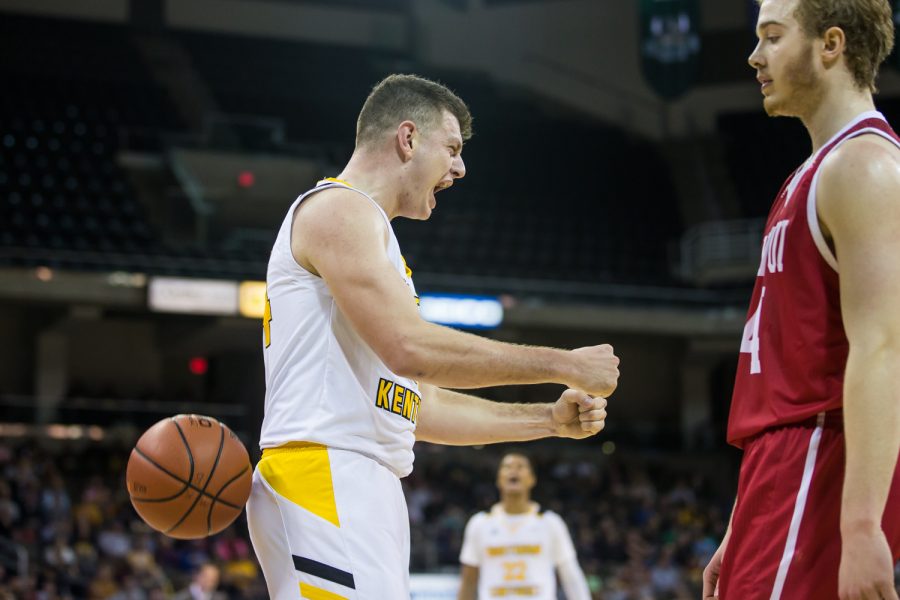 Drew McDonald (34) reacts to a point during the game against IUPUI. McDonald had 24 points on the game.

The NKU men’s basketball team continue their winning streak with an 82-74 victory over Youngstown State on Saturday afternoon.  The Norse won their 16th game of the season and improve their Horizon League record 6-1 while the Youngstown State Penguins record drops 2-5.

The first half of the game featured the two teams tying six times along with six lead changes.  At the 19-19 mark the Norse went on an 8-0 run with 7:02 left in the half. The half ended with the Norse up 38-34.

Tate led the Norse in scoring for the first half earning 11 of the teams points.  Sharpe followed closely behind earning 10 points. As a whole the Norse had an impressive 11-3 advantage in offensive boards.  They also outscored the Penguins 22-10 in the paint and earned 44 percent from the field.

The Penguins managed to make a slight comeback during the second half as they took a 55-54 lead over the Norse at the 11:36 mark. However, the Norse recovered and managed to regain a 62-57 lead a few minutes later.

The major turning point of the game occurred shortly after.  Just within the four minute mark, the Norse outscored the Penguins 13-4, which brought the score up to 73-61 with 5:04 left to play.  For the remaining stretch of the game, the Penguins never got within eight points of the Norse.

Overall the Norse, shot 50 percent and had a 36-24 rebounding advantage for the game. They also outscored the Penguins in the paint 40-28. This game brought the Norse to a four game winning streak and their eighth win in the last nine games.

The Norse will continue their Horizon League play at home against Green Bay on Jan. 24.  The game is slated for 7 p.m. and will be broadcasted on FOX Sports Ohio.