The Norse out rebound the Vikings 41-35. 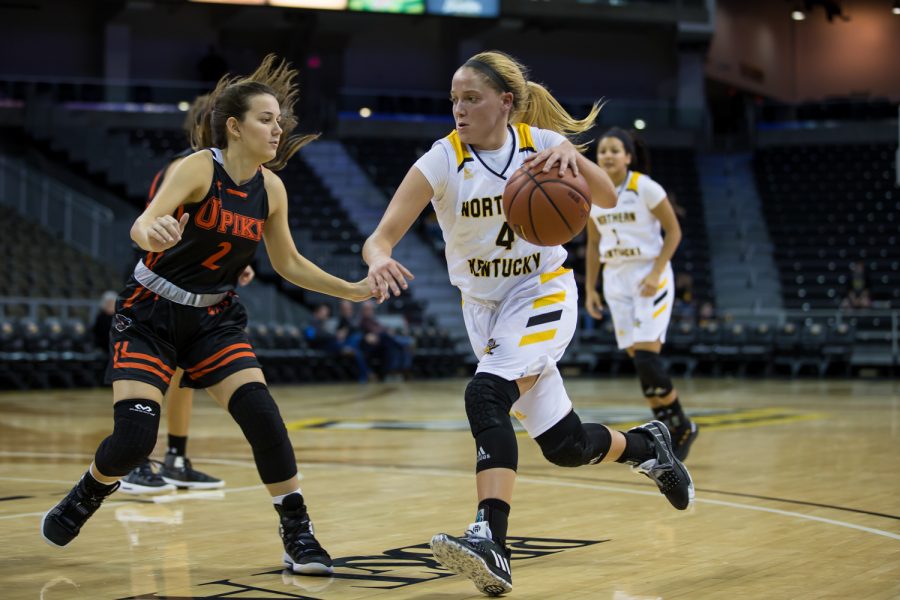 Taylor Clos (4) drives toward the basket during the game against University of Pikeville.

The NKU women’s basketball team couldn’t seem to find their footing on Friday morning against the Cleveland State Vikings, losing the game, 76-47. The Norse fall to 3-13 on the season and 2-4 in the Horizon League, while Cleveland State improved to 7-11 overall with a 4-3 conference mark.

The Norse fell behind 22-9 in the first quarter, which set the tone for most of the game. The Norse failed to have a single player score in the double digits. The Vikings, however, had four players hit the 10-point mark. Junior guard Mariah Miller of Cleveland State led all scorers with 21 points.

The second quarter the Norse were able to hold the Vikings to 15 points, and offensively the Norse put up 13 points. It was an offensive struggle for most of the game, as the team shot 34 percent from the field in the first half and only made three three point attempts. The Norse ended the first half down 37-22.

The second half the team’s shooting did not improve, only making 18 percent from the field and unable to score any three pointers. For the game both teams struggled behind the arc, the Vikings made 5 of 15 and the Norse put up 2 of 15. The Norse were unable to overcome the deficit, with a final score of 76-47.

The Norse beat Cleveland State on the boards with 41 compared to their 35.

Cleveland State holds the series lead 6-3. Next up the Black & Gold face Youngstown State in Youngstown, Ohio on Sunday, Jan. 20 at 1 PM. The game will be broadcast on ESPN3.