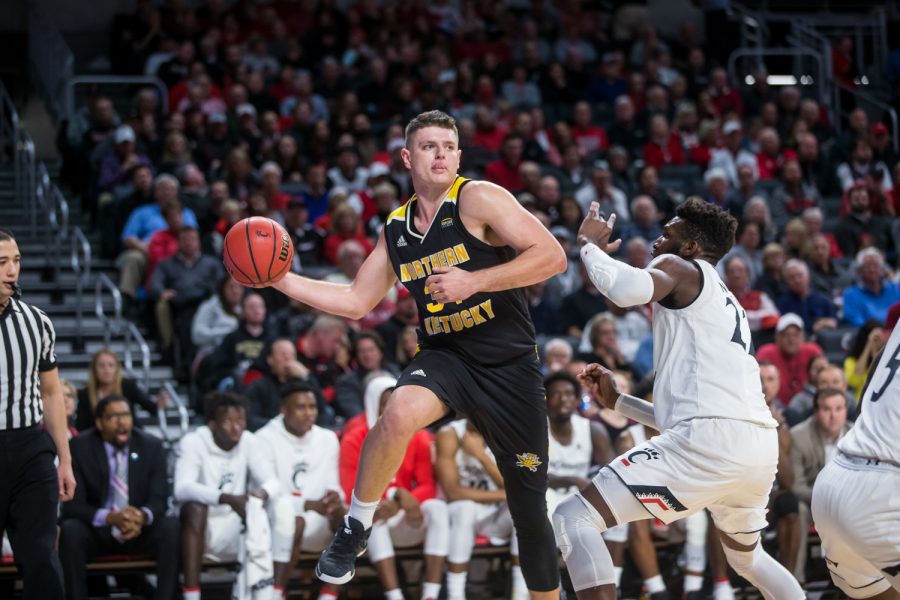 Drew McDonald (34) looks to pass during the game against UC. McDonald led the team 4 turnovers on the game.

McDonald is on the watch list for the second consecutive season. The Lou Henson Award is presented to the country’s top mid-major player in Division I college basketball. The award will be presented in April at the men’s NCAA Final Four in Minneapolis.

The 6’8” senior is currently averaging a double-double with 18.6 points and 10 rebounds a game. He leads the Horizon League in double-doubles this season with 8 and is one of only 16 players in Division I to have a triple-double in a game this season. Drew recently became the all-time leading rebounder in Norse history in a loss against Eastern Kentucky University.

This recognition adds to the growing list of accolades collected by the Cold Spring native this season, including Horizon League Preseason Player of the Year and KEMI Northern Kentucky Basketball Classic MVP.

The Lou Henson Award is named after former Illinois and New Mexico State coach Lou Henson, who was sixth all-time in Division I with 779 wins when he left the game in 2005 after 41 years of coaching. He was one of only 12 coaches in Division I history to take two schools to the Final Four.

McDonald’s fine play so far this season has helped the Norse to a 14-4 record overall as they head into an away match against the Cleveland State Vikings on Thursday. Tipoff is 7 p.m. Watch the game live on ESPN+.