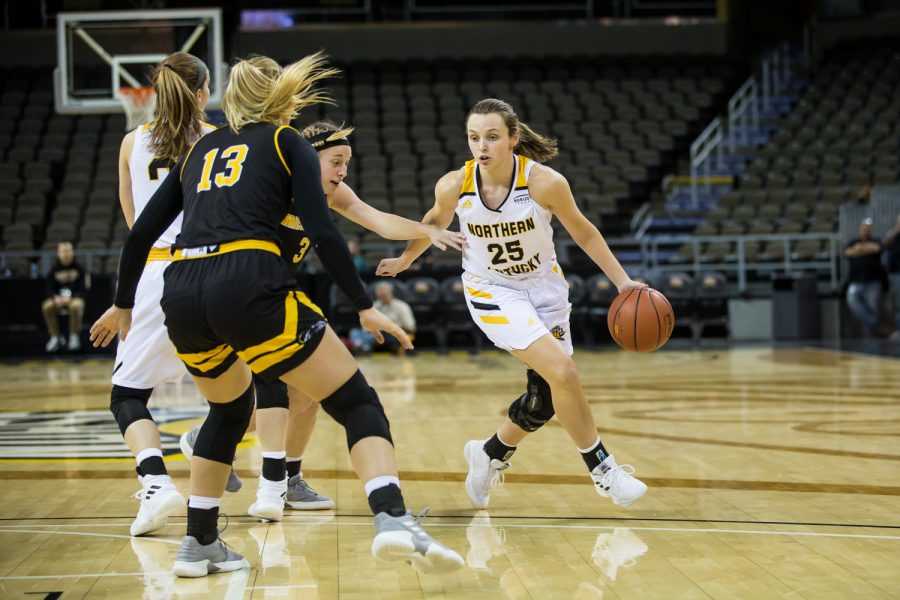 Ally Niece (25) drives toward the basket during the game against Milwaukee. Niece had 11 points and shot 4-of-9 on the night.

The Norse started off slow, not scoring their first point until three minutes into the game. Milwaukee led for most of the quarter until freshman center Emmy Souder made a power move in the post, obtaining a foul while scoring from within the paint. Milwaukee went on a 9-0 run to end the quarter, making the score 14-7.

Glick opened up the second quarter with a three-point basket. Milwaukee made a trip down the court to score and Glick answered again with a three pointer. The Panthers fouled the Norse with eight seconds left, which gave Niece the chance to score two free throws. The Norse ended the half down by one 25-24.

“I’ve been just working on confidence, and the coaches are on me, and my teammates believe in me,” Glick said. “So just I felt like coming into this game, I had a lot of confidence, and being able to knock down those shots I mean, I wouldn’t [be able to] do without it, you know, the post slip ins and the passes from the guards.”

At the half, the women’s team shot for 30 percent in both field goals and three-point baskets.

Coming out of the half, the Panthers were the first to get points on the board, but Souder answered with a three-point basket and brought both teams to a tie at 27 points. The Norse defense picked up and drove a 5-0 run. Freshman point guard Taylor Clos extended the lead with a three-point basket. The Norse ended the quarter 38-35, and shot 60 percent from the three point line.

Niece wasted no time and opened the fourth quarter with a three-point basket. The Panthers were able to get themselves within one point of the Norse with under five minutes to go in the fourth quarter and eventually took the lead.

The Norse didn’t let the lead go that easy – sophomore guard Grace White swiped a steal and a basket getting the score to 53-54. Milwaukee gets a chance to go to the line and didn’t make good of the opportunity. Milwaukee fouled Coffey, sending her to the line. Coffey’s free throws were nothing but net, putting the Norse up by one point for the win, 55-54.

“I’m so proud of our team and how they fought, and our players never quit,” Head Coach Camryn Whitaker said. “You know, we went down three and, you know, typically we’ve lost five games this year by five points or less. And so to be able at the end to execute things that we practice all the time is really, really encouraging for our team and hopefully build some confidence within our young players.”

The Norse shot 38 percent from the field for the game and out-rebounded the Panthers 36-28.

The Panthers previously lost to another Horizon League foe, Green Bay 62-76. They now sit at 0-2 in the conference and 5-8 overall. The Norse advance to 2-1 in conference play and 3-10 overall.

The Norse continue Horizon League play against Green Bay Saturday, Jan. 5 at BB&T Arena. Tip off is set for 2 p.m. and will be broadcasted live on ESPN3.