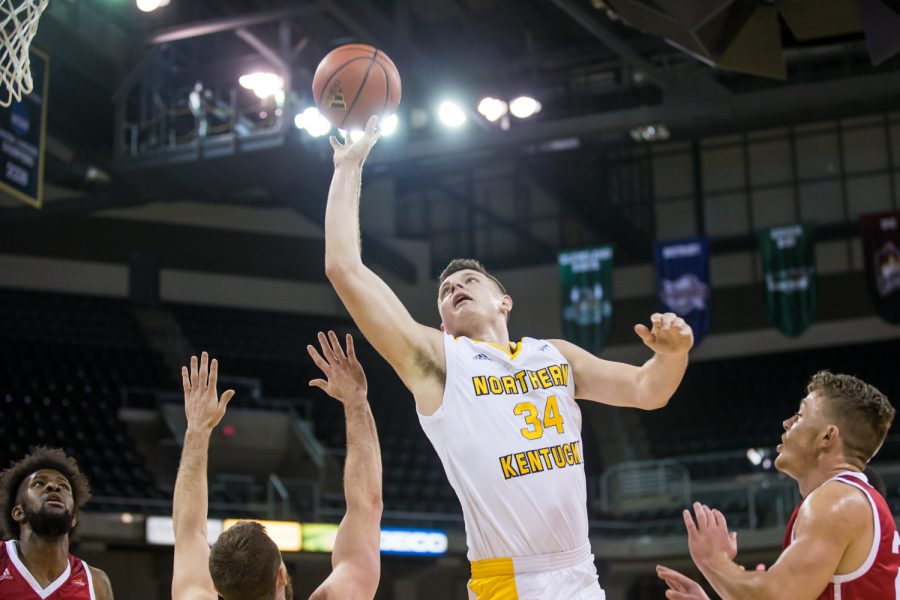 Drew McDonald (34) goes up for a shot during the game against IUPUI. McDonald had 24 points on the game.

McDonald has recorded 15 double-doubles in NKU’s last 21 Horizon League games – the Norse are 17-4 in those games.

“Basketball is a game of runs,” McDonald said. “We made a run early, they hit back, we knew shots were going to fall. We knew if we just focused on what we could control on the offensive and defensive end, we were going to live in the process, and just continue to do what we do.”

The team’s toughness showed Friday, especially when Sharpe went down hard on the court toward the end of the first half. The fall caused a nasty gash on the side of his head, which required seven staples.

“I didn’t know it was bleeding at first until I started to walk away and saw my arm covered in blood, but the spot where I hit was hurting pretty bad,” Sharpe said. “I didn’t feel like I had a concussion. I had a concussion last year so I kind of knew what it felt like. I went and warmed up and was like ‘I think I can go,’ and Coach B said go ahead.”

Brannen gave high praise to Nelson after the game for his efforts, “ten points, 4 of 5 from the free throw line, I really liked that. Just energy, defensively, rebounding, they were big points, they were on runs, we were able to sustain a lead because of Adrian Nelson.”

With the win over the Jags, Norse men’s basketball moves to 11-3 overall.

Next, NKU faces off against UIC Flames at BB&T Arena on Sunday, Dec. 30. Tipoff is at 6 p.m. The first 500 kids in the door will receive a Victor E. Viking drawstring bag.