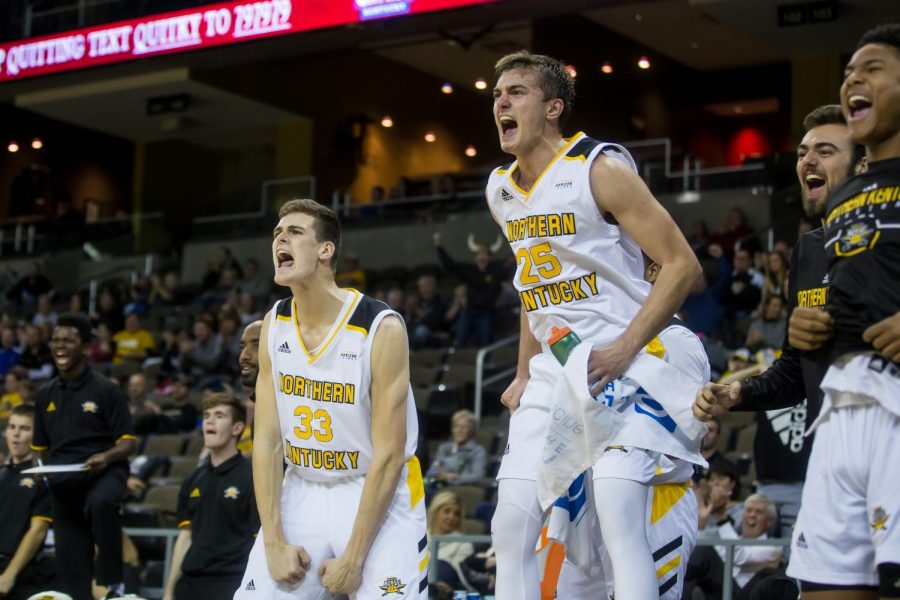 NKU Players Celebrate after a point during the game against UNC Asheville. The Norse won 77-50.

The Norse opened its KEMI Northern Kentucky Basketball Classic by defeating the Bulldogs 77-50 on Friday night. With the victory, the Norse remain undefeated (4-0) while the Bulldogs drop to 1-2.

Defensively, the Norse forced 27 turnovers; a program high against a Division I opponent in the Division I era and held a 32-13 shot advantage in points off of turnovers.

“It was probably our best defensive performance to date so far,” McDonald said. “We felt like one team, one defensive unit out there and it was was really nice to finally get back to who we were.”

After shared baskets from Tate, McDonald and Dantez Walton, the Norse got off to a hot start and took the early advantage 10-2, just five minutes into the first half.

Defensively, the Norse forced five turnovers in the first five minutes of play as well and refused to let up. The Norse held the Bulldogs to only 5 points in the first ten minutes of the half and continued to stretch the lead, 37-19.

The Norse maintained a double-digit lead throughout the second half and went on a 19-0 run towards the end of the game to seal the deal.

Though the Norse outscored the Bulldogs 44-18 in the paint and secured the rebound advantage 42-27, the bright spot of the second half came from the bench.

“We struggled a bit in the second half, but brought the bench in and those guys really took it to the next level,” Brannen said. “Especially Silas [Adheke] and Trevon [Faulkner], they stepped up on defense, which helped the other guys get more rest, which is important with three games in three days in this tournament.”

Up next for the Norse is a 7:00 p.m. showdown with Manhattan on Saturday night at BB&T Arena. The Jaspers defeated Coastal Carolina 55-53, in the opening game of the tournament.

“This was the first time I drove into BB&T Arena more excited for games other than ours,” Brannen said. “Several times during the game, I looked up and saw the student section jumping up and down and our players really fed off their energy. I want to challenge them again, because that is so meaningful for us to be as successful as were capable of being. I hope we see the same thing tomorrow night against an outstanding Manhattan team.”