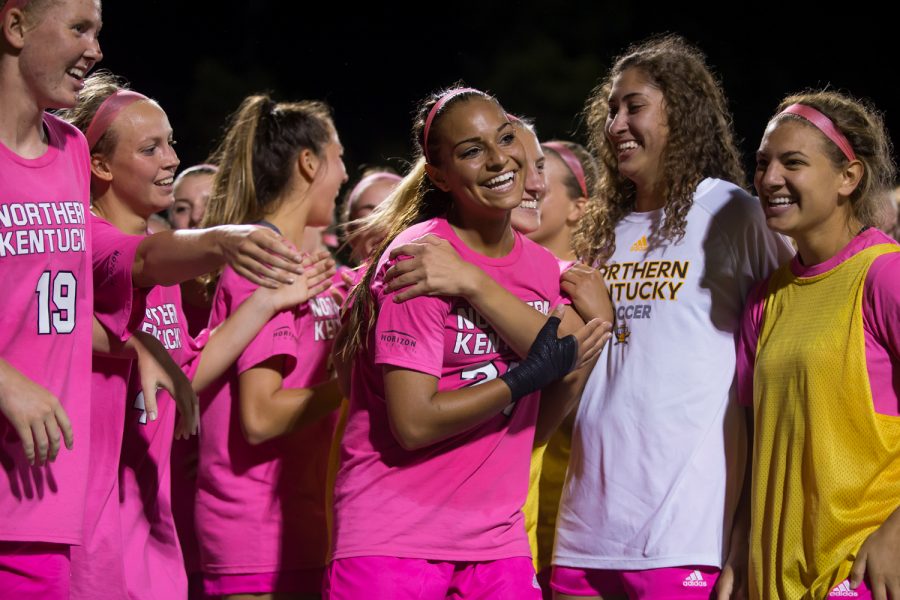 Samantha Duwel (27) celebrates with teammates after her golden goal during the second overtime period. Her goal pushed the Norse past Detroit Mercy.

With the regular season finale just hours away, the Northern Kentucky University women’s soccer team know the pressure is on to capture their second Horizon League championship and refuse to take their foot off the gas as conference tournament play is near.

“Our goal is to earn 3 points in each of our last three regular season games,” head coach Bob Sheehan said. “We are currently tied for third place in regular season conference play. The top six teams (out of 10) will earn a bid to the conference tournament.”

Coming off Oct. 20’s loss against Milwaukee at home on senior day, the Norse bounced back against UIC, beating the Flames 1-0 on Friday. Conference tournament play begins at home on Monday, Oct. 29 against No. 6 Oakland.

“We need to stay focused on our goals and continue to be committed to every training session and every match,” Sheehan said. “We also need to minimize mistakes and create and capitalize on scoring opportunities in order to be successful.”

It’s not easy to maintain poise under pressure, but midfielder/forward Shawna Zaken makes it clear that her team has to keep a strong mentality to have a chance at winning.

“Towards the end of the season is when it is crucial that we continue to be mentally strong as a team,” Zaken said. “It’s easy for teams to start feeling drained or unfocused this time of year, but I think our team displays a very strong mentality and we are all playing for the same end goal: conference championship.”

“Through team meetings and film review, we mentally prepare ourselves for every game,” Duwel said. “We have expectations for every team and we mentally work through how we can exploit them throughout the game. If we can continue to execute our game plans, we will continue to win.”

With the program having a strong tradition of winning conference regular season and conference tournament championships (Horizon/Atlantic Sun), Sheehan said there is a feeling amongst the team that they can achieve something remarkable this season and will look to his senior leader’s to galvanize the underclassmen to push them in order to play their best.

“We have an outstanding group of seniors who were a part of our first Horizon league tournament championship in 2016,” Sheehan said. “Our seniors have done a tremendous job in providing leadership for the team.”

Out of the seven non-conference opponents, five have been ranked in the NCAA Top 100 RPI this season and have played an integral part in the Norse’s conference success.

With the regular season coming to a close and a Horizon League Quarterfinal matchup at home around the corner, Zaken and Duwel, who have combined for 10 goals, 10 assists and 30 points, will look to shift their focus after tonight to their main goal — winning a championship.

Kickoff against UIC is scheduled for 8 p.m. ET and will be broadcast live on ESPN+.