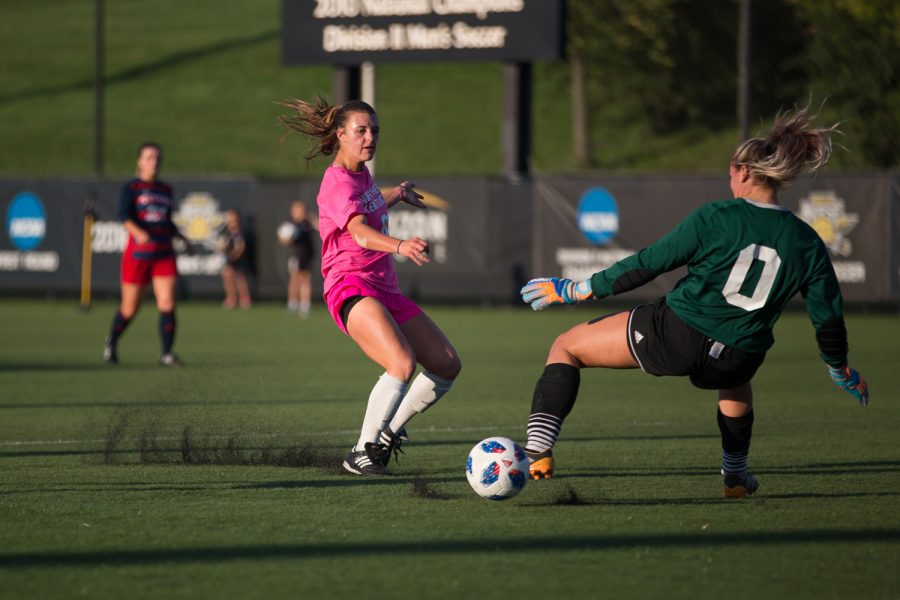 The NKU women’s soccer team won in dramatic fashion Sunday night, after Samantha Duwel netted the game winning goal in the 104th minute of double overtime, scoring a 3-2 victory over Detroit Mercy Titans. The Norse now move to 7-3-1 overall and 3-0-1 in Horizon League play, while the Titans move to 3-6-3 overall and 0-3-1 in conference play.

“This was yet another highly competitive Horizon League match,” head coach Bob Sheehan said. “We needed a big moment, and Emily, Shawna and Sam combined for an outstanding goal to win the match in overtime.”

The Norse were the first to strike in the 14th minute after a goal from junior midfielder Shawna Zaken. Emily Soltes earned an assist on the goal for the team. The Titans would tie the match in the 38th minute after Julie Ann Piechocki fired a shot into the upper right corner of the net, but the Norse would answer quickly with a goal in the 41st minute to take a 2-1 lead.

The Titans attempted to score in the 67th minute, but the shot was saved by Emily Lohmann. Detroit would tie the match at 2-2 in the 77th minute after a free kick played into the box that was tapped in by Olivia Parra for the Titans. In the closing minute of regulation, Duwel attempted a game winning goal for the Norse, but was saved by goalkeeper, Marina Manzo.

In overtime, Zaken had a chance to win the game for the Norse in the 93rd minute, but her shot was just wide right of the goal. After a pair of unsuccessful shots from Carly Fiorido for the Titans in the 97th and 99th minute, the Norse gained possession in the final minute. Soltes played the ball near the top of the box to Zaken, who then passed the ball out to the right side to Duwel, leading the senior midfielder to fire a shot in the lower left corner to seal the victory.

The Norse finished with an 18-15 shot advantage, and a 7-4 advantage in corner kicks, while Lohmann faced 15 shots and made three saves between the posts.

The Norse will return to NKU Soccer Stadium on Saturday, Oct. 6 for a home match against IUPUI. Kickoff is scheduled for 7 p.m and the match will be broadcast live on ESPN+.