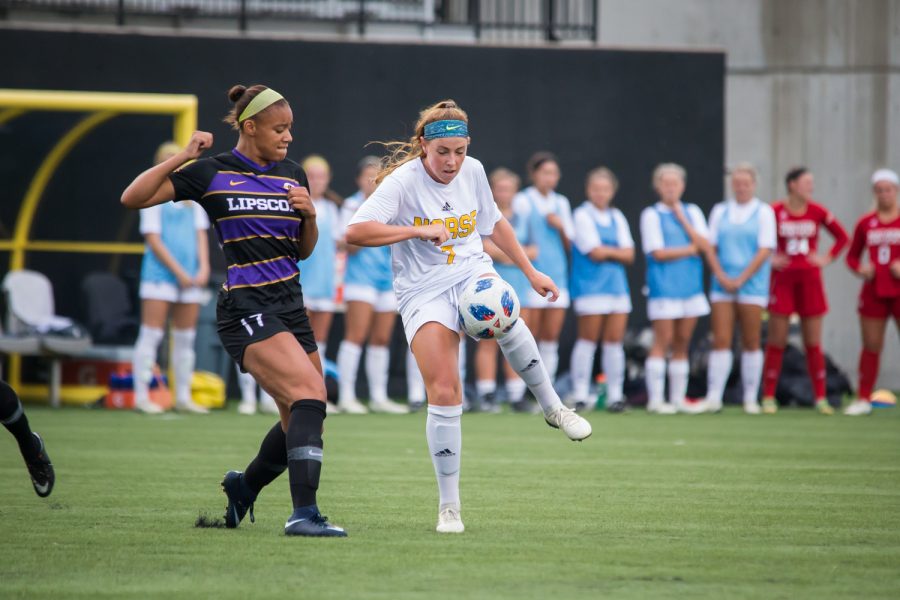 Emily Soltes (7) plays a ball in the air during the game against Lipscomb.

The NKU women’s soccer team continued their home winning streak Thursday night in a 2-0 shutout against the Lipscomb Bisons. The Norse move to 4-2 overall as the Bisons fall to 3-2-2.

“We have the desire, we have the drive and I think that’s probably my favorite thing about this team,” senior midfielder Samantha Duwel said. “Coming out, each individual player puts in the work and does their job, so when that all adds up together, I mean we’re just a great team.”

The Norse doubled their lead in the 69th minute after Duwel played the ball up the field to Emily Soltes, who then found Shawna Zaken to fire a shot in the lower left corner of the net to earn her second goal of the season.

“I just think the overall thing was that the intensity just all around the field was there tonight, I think we came out harder than we have really any game this season,” Soltes said. “Every single player was pressuring until the very last second.”

The Norse fired the first shot in the early goings of the first half, after Duwel crossed a corner kick and Ally Perkins went in for the shot, but was stopped by the Bisons defense. Senior midfielder Rachel Conaway would secure the rebound, but her attempt was just wide right of the goal in the seventh minute.

Both teams would continue to battle back and forth, but it was the Norse that struck first, after Payton Naylor played the ball through the box to Duwel, who then played the ball to Sutton. Sutton was able to score from close range to give the Norse the lead, 1-0 headed into halftime.

After taking a 5-2 shot advantage in the first half, head coach Bob Sheehan thought the team could have been “a bit more assertive” in their attack and would have to come out firing on all cylinders in the second half, if they wanted to upstage the Bisons.

“Lipscomb is defending champions in the [Atlantic Sun Conference],” Sheehan said. “I think when you bring in teams with championship mentalities and championships you’re always going to be challenged.”

After Zaken doubled the lead in the second half for the Norse, Soltes fired a shot from the outside in the 83rd minute, but was blocked by the crossbar. Kailey Ivins attempted to make a play on the ball, but was saved by redshirt-senior goalkeeper, Kate Mason.

The Norse would be denied again in the 86th and 90th minute, after Mason knocked the attempt away for her 27th save of the season and Ella Hollands shot was just wide right of the net.

The Norse offense was relentless after taking a 10-5 shot advantage in the match and recorded six corner kicks to the Bisons three. The defense was stellar throughout the night as Emily Lohmann played the full 90 minutes between the posts and had three saves.

“I think we defended really really well again,”  Sheehan said. “Again, shutting out the other team, I think limiting them to five shots over 90 minutes and I think our attack was very good.”

With their third shutout of the season, the Norse are “hoping to knock off the number 22 team,” in the nation, the Bulldogs from Butler, on Sunday, Sept. 9 in Indianapolis. Kickoff is scheduled for 1 p.m. and will be broadcast on Facebook live.