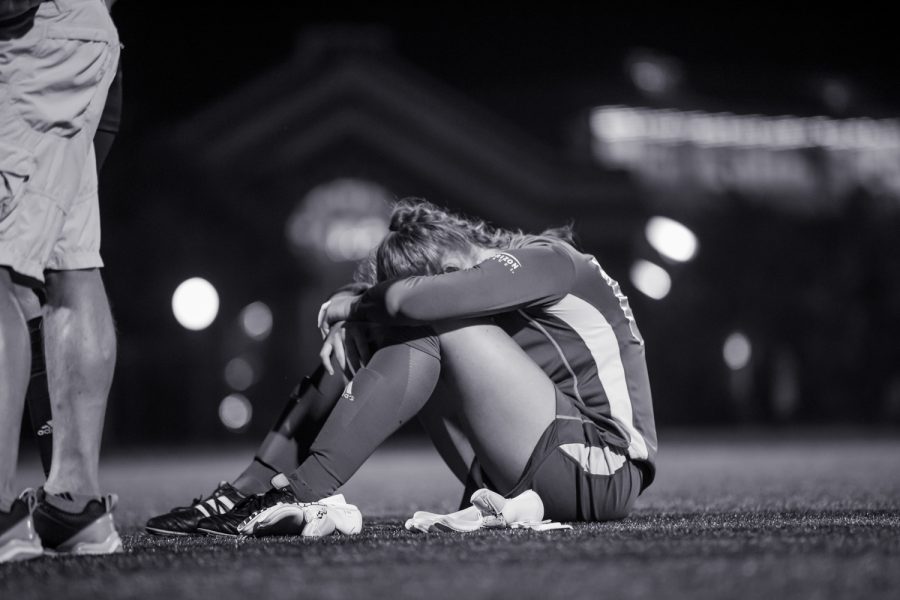 Keeper Emily Lohmann (00) reacts after letting in a goal during overtime in the game against UC.

The NKU women’s soccer team fell in overtime to University of Cincinnati 1-0 in the third annual “Riverboat Rivalry” at Gettler Stadium Sunday. With the loss, the Norse drop to 2-2 overall on the season, while the Bearcats move to 3-0 overall.

It’s the third year in a row the Bearcats defeated the Norse by a score of 1-0.

“[Bearcats head coach Neil Stafford] has done a great job with the UC program,” Norse head coach Bob Sheehan said. “This match has become such a great showcase for our two programs.”

Just minutes into overtime, the Norse had an opportunity to score after Ally Perkins crossed the ball into the box and found Samantha Duwel, who then fired a shot that was blocked by the Bearcat defense. Shortly after, the Bearcats’ Jill Vetere netted the game-winning goal in the 98th minute off a corner kick from Dee Picou.

Senior goalie Emily Lohmann played the entire 98 minutes and led the Norse as she faced 18 shots and collected six saves.

“Emily was fantastic in goal tonight,” Sheehan said. “Our defensive shape and work ethic was again outstanding, we competed for 98 plus minutes and we will learn and grow from this match.”

Chloe Mills took the first shot in the 13th minute for the Norse but was quickly deflected by Bearcats goalie Madison Less. The redshirt sophomore sprang into action again as she would make two more saves in the 20th and 21st minute. Lohmann would join in on the action between the net, as she used her foot to clear a shot from Bearcats midfielder Emi Carlo in the 29th minute and Picou’s kick from outside the box in the 40th minute.

After making two crucial saves in the 83rd and 85th minute, Lohmann would continue her dominance throughout the second half and helped send the game into overtime. The Norse missed an opportunity to score early on, after Duwel fired a shot deflected by the Bearcats defense. The Bearcats would seal the victory minutes later, after Vetere grounded the ball off of a corner kick by Picou and fired a shot past Lohmann.

987 fans turned out for the match, marking it the eighth-largest home crowd for the Bearcats and the 16th-largest crowd they have ever played (home or away).

The Norse will hit the road and travel to Athens, Ohio to take on the Bobcats of Ohio University, Friday, Aug. 31. Kickoff is scheduled for 4 p.m.