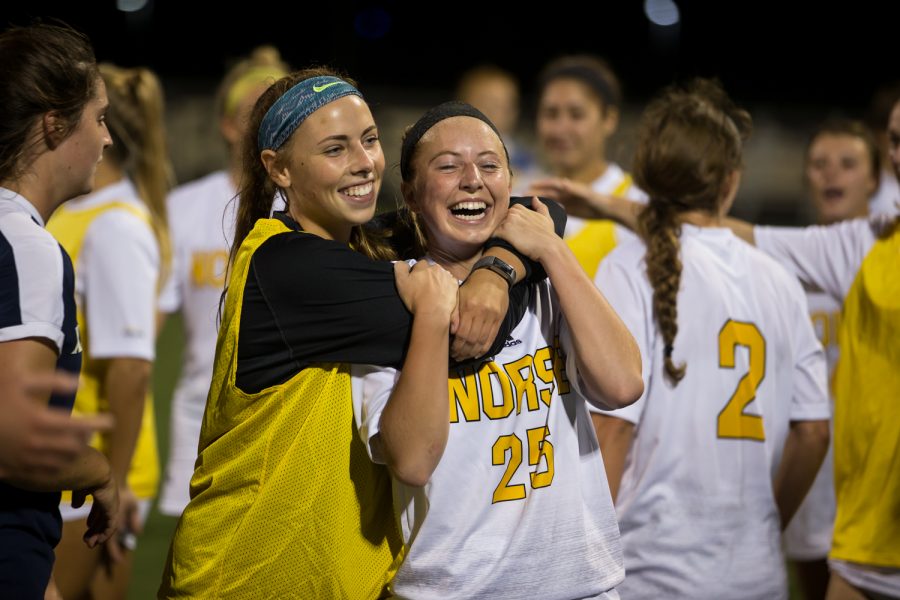 Payton Naylor (25) is embraced by teammate Emily Soltes (7) after scoring the winning goal in the 1-0 victory over Xavier.

The Northern Kentucky women’s soccer team opted for the dramatic Thursday evening, scoring a 1-0 victory over the Xavier Musketeers (1-2 overall) by netting a goal with 15 seconds left in the match.

“I haven’t scored since freshman year!” midfielder/forward Payton Naylor said. “To be able to score off a goal this awesome against a team this good is honestly such an honor and blessing.”

Naylor’s winning shot just before time expired upped the Norse to a record of 2-1 overall. The team remains undefeated at home.

“I’m really happy for Payton,” head coach Bob Sheehan said. “Payton showed great skill and technique in settling the ball at pace and finishing the goal. I couldn’t be any happier for our entire group.”

After losing to Murray State (2-1) in overtime last Sunday, Sheehan was happy to get the win in regulation and felt the leadership from his upperclassmen is what made the difference.

“Emily [Lohmann] was terrific in goal and Taylor Spaulding in the back was fantastic,” Sheehan said. “Sam Duwel went the whole 90 minutes and Erin Sutton provided a huge spark coming off the bench tonight.”

The first shot of the night was taken nine minutes into the half by the Musketeers’ Samantha Dewey, but was rejected by the back line of the Norse defense. While sophomore midfielder Megan Patrick and junior forward/ midfielder Shawna Zaken tried to make their mark on the scoreboard for the Norse, they were unsuccessful in the 25th and 38th minute.

“I felt we were very solid defensively,” Sheehan said. “We didn’t give them much and the few times they would have gotten loose, I think our players were always there to cover.”

Much like the first half, neither side was able to break the other one down until the final minute of the game.

After a pair of shots from the Musketeers in the 89th minute, the Norse gained possession in the final seconds. Junior defender Hannah Fischer broke the defense and found senior midfielder, Erin Sutton, who then played the “perfect ball” to Naylor. Naylor struck to the right of the goalkeeper, sailing it into the net with 15 seconds to spare.

“I wouldn’t have been able to do it without my teammates,” Naylor said. “We cleared it from the back and as soon as Erin got it, I knew I had to get up the field to help her out and it just turned out to be a beneficial run for us.”

While the Musketeers doubled the Norse in shot attempts (12/6), the Norse showed their physical presence in the second half by posting nine fouls to the Musketeers’ seven.

Lohmann made five saves on the night, including a big one in the 57th minute to keep Courtney Lankford and the Musketeers off the scoreboard.

“We worked really hard defensively,” Lohmann said. “They only had five shots on goal and only one, maybe two of them were really threatening.”

The Norse will look to build off this momentum as they travel up the road to take on the Cincinnati Bearcats (1-1) at Gettler Stadium for the Riverboat Rivalry on Sunday, Aug. 26. The Bearcats lead the series 2-0.

The official attendance for the first ever Riverboat Rivalry was 4,722 people which not only broke the the UC women’s soccer attendance record, but also the record for any women’s collegiate soccer game in the state of Ohio.