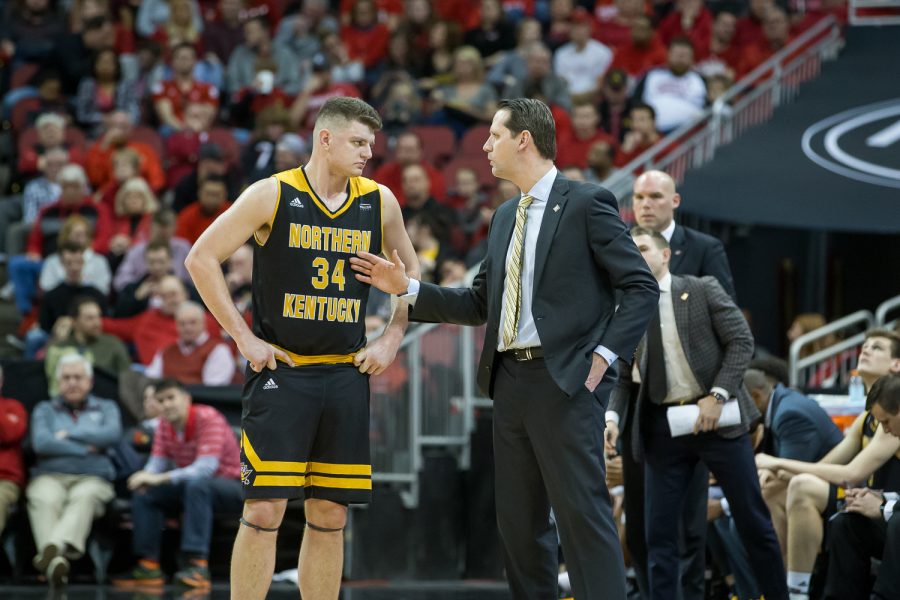 Drew McDonald (34) talks to Head Coach John Brannen during a free throw during the game against Louisville.

The Lou Henson All American team honors the nation’s top-40 mid-major men’s basketball players. Northern Kentucky, according to College Insider ,is ranked 25 in the nation for mid-major schools.

McDonald led the Norse in scoring with 17 ppg, which ranks sixth in the conference. He was also ranked 27th in the nation in rebounds per game at 9.6. McDonald also recorded 18 double-doubles this season, which was tied for 11 in the NCAA.

Throughout his three years at NKU, McDonald has accumulated 1,431 points and 762 rebounds which rank 11 and fifth all time in school history. McDonald has also set the career record for defensive rebounds with 565.

The Norse finished the season with their second consecutive 20-win season with their first Horizon League regular season title. They fall to Louisville in the first round of the National Invitational Tournament.

Oakland’s Kendrick Nunn who won the Horizon League Player of the Year was also named to the team.