Preview: Norse set to battle Louisville in first round of the NIT 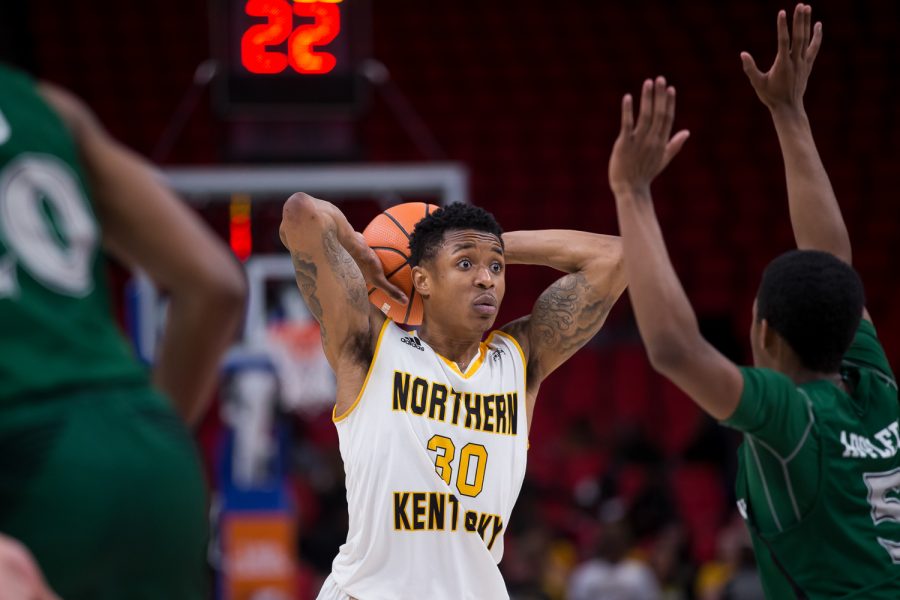 Lavone Holland II (30) looks for a teammate to pass to during the game against Cleveland State at Little Caesars Arena.

Last week after NKU lost to Cleveland State in the quarterfinals of the Horizon League tournament, head coach John Brannen said the NIT would be about which team would be most excited to play.

The Norse appear to have the upper hand so far, as reports from the Courier Journal suggest Louisville players voted against playing in the tournament. Louisville, however, had already accepted the invitation to the tournament. So, NKU will play the Cardinals at 7 p.m. on ESPN at the YUM Center in downtown Louisville.

The Cardinals are the two seed with a 20-13 record while the Norse are 22-9 on the season and claimed the seven seed.

Louisville has had a tumultuous season, after the NCAA swiped the 2013 National Championship trophy from them as a result of a prostitution scandal and former head coach Rick Pitino was fired for his role in a scandal involving adidas.

Deng Adel is averaging 15.4 ppg for the Cardinals while Ray Spaulding and Quentin Snider are averaging over 12 ppg. Louisville averages 76 ppg and allows opponents

The Norse are in a national tournament in their second year of eligibility after winning the Horizon League regular season outright.

Drew McDonald is scoring 16.9 ppg and grabs 9.5 rpg while Lavone Holland II is scoring 13.8 ppg for the Norse. NKU scores 78 ppg and holds their opponents to 66 ppg.

The NIT will feature different rules than a normal college basketball game, including moving the three point line back 20 inches to match FIBA regulations and their will be four, 10 minute quarters instead of 20 minute halves (similar to women’s college basketball).

Teams will shoot free throws after the fifth foul in every quarter and the free throw line will also be widened to NBA regulations.

There are several Louisville connections on this Norse squad, including sophomore Tyler Sharpe, who transferred from Louisville to NKU. Holland grew up in Louisville.

Tip-off is schedule for 7 p.m. on ESPN. There are also tickets still available for the game and an NKU sponsored bus will be taking students down to the game.