Gallery: Cardinals rally in second half to end NKU’s season 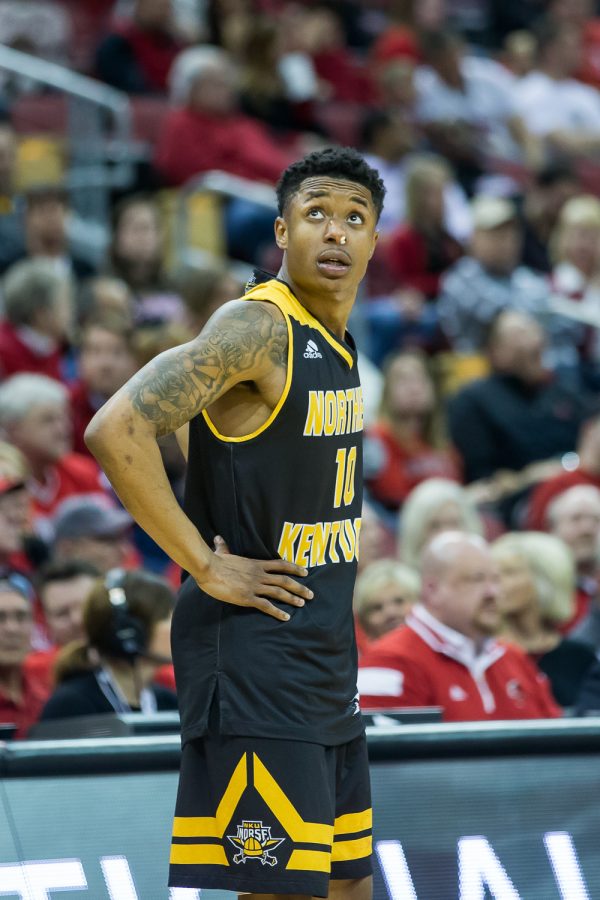 Lavone Holland II (30) reacts to the loss to Louisville at the KFC Yum center.

For two and a half quarters it appeared NKU would have a chance to complete an upset over Louisville.

The Norse, however, fell to the Cardinals 66-58 in the KFC YUM Center in the first round of the NIT Tuesday night, ending NKU’s season. Louisville advances to play Middle Tennessee State in the second round of the tournament.

“It’s tough. It was a good game,” junior Drew McDonald said. “We had our chance. We were up the whole first half. You gotta give them credit, they came out and kept fighting.”

Louisville’s Deng Adel led all scorers with 20 points while McDonald led the Norse with 19 points and 13 rebounds.

Lavone Holland II, a Louisville native, didn’t play particularly well in his final game as a Norse. The point guard scored 15 points but went 5-17 from the floor and 2-10 from three and was pretty clearly injured at time in the second half.

“He was pressing a little bit,” head coach John Brannen said. “He kind of struggled mentally there for a period of time and then he got it back.”

Holland also busted his nose in the final quarter. No other Norse reach double figures in scoring and the Cardinal bench outscored the Norse bench 25-9.

With the NIT rules, which included quarters instead of halves, an extended three point line and a wider lane, both teams struggled to find a rhythm early on.

“I don’t think the three point line needs to be moved back,” Brannen said. “Because I don’t think anybody shoots a very high percentage. The quarters were uncomfortable from a coaching standpoint. It took some time to figure out.”

In the first quarter, Louisville jumped out to an early six point lead, but NKU would cut the gap to two points after the first media timeout, 11-9. Carson Williams gave the Norse their first lead after running the floor and scoring a layup. The Cardinals would end the first quarter with a 16-15 lead.

That changed in the second quarter, when McDonald hit a three to give the Norse an 18-16 lead. A Jalen Tate layup on an assist from McDonald gave NKU a 20-16 lead. The Norse were able to maintain their lead for most of the second quarter and led 30-23 at halftime.

NKU held Louisville’s leading scorer Deng Adel to just four points in the first half. The Cardinals shot just 25 percent in the half while the Norse shot 31 percent. McDonald led all scorers with 10 points and six rebounds.

Lavone Holland finished the first half with nine points and four rebounds. Ryan McMahon led the Cardinals with five points at halftime. NKU also held a 25-23 rebounding advantage over the Cardinals.

“They just picked up the pressure,” McDonald said. “They got in the passing lanes, turned us over, and just sped us up. We were comfortable in the first half. Even though we weren’t making shots we were getting open looks. Second half the shots we did get, worked hard for those shots.”

The Norse wouldn’t score in the fourth quarter until the five minute mark and couldn’t consistently get enough stops or baskets to hang with the Cardinals in the end.

“I feel like we could never just get one more run to get one more crack at it,” McDonald said. “They kept their foot on the pedal.”

For Holland, Garnett and Nick Ayers, their NKU careers are over. Garnett said he still feels like there is another half of basketball for him to play.

“I’m very proud of what we accomplished,” Garnett said.

NKU will head into next season likely as the favorite to win the Horizon League again and a lot of talent still left on the team. The Norse will also add Trevon Faulkner, the 2018 Mr. Kentucky Basketball to the roster.