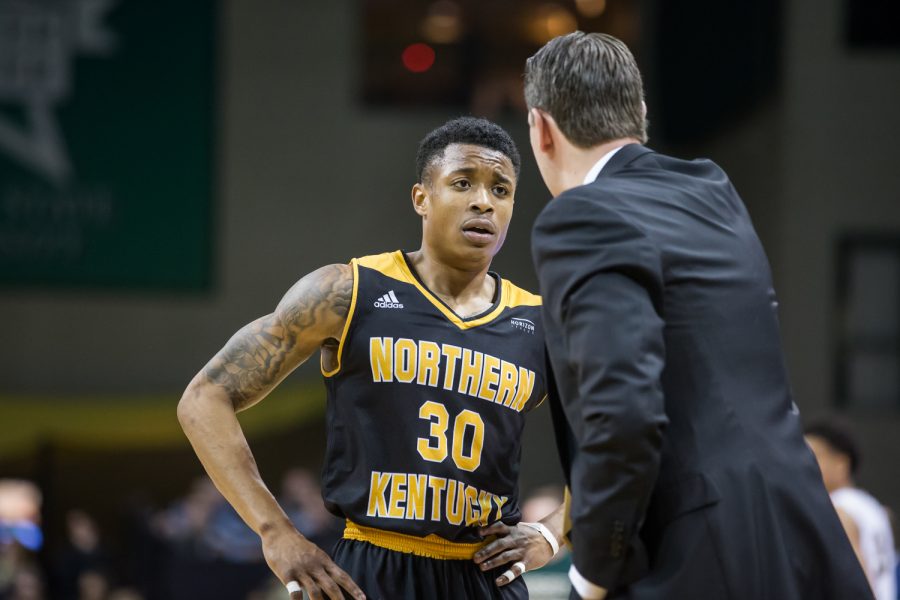 Lavone Holland II (30) talks to Head Coach John Brannen during a timeout in the game against Wright State .

It felt like a playoff game Friday night in the Wright State Nutter Center. While the Raider fans made up most of the 7,000 people in the arena, section 207 was distinctly Norse fans.

“The environment was impeccable,” junior forward Drew McDonald said. “I can’t even describe it… This is developing into a rivalry. We are an hour apart. To have a following like that come up this early in the division I era is just unbelievable.”

Unfortunately for the Norse, they did not come out on the winning side.

“They are a top 30 defensive team in the country so it’s very difficult to score,” NKU head coach John Brannen. “Teams that have beat them have made a lot of threes and we didn’t make threes. The biggest thing was we didn’t make stops when we needed to make stops.

“Our guys showed great effort and great poise to come back from 11 points down with 6:30 to go and put ourselves in position to even get a chance to win the game. So, I’m very proud of that part of it.”

With the win, the Raiders earn the tiebreaker over the Norse and move into first place in the Horizon League, potentially for good.

“Loudon’s a big boy,” McDonald said. “He’s really good at getting angles, pivoting. He’s going to be a really good player for years to come in this league. I did my best. I probably could have done a little bit more. That could be what won them the game… That’s on me. I was guarding him most of the game.”

Love is a  six time Horizon League Freshman of the Week this season and, with his performance tonight, is in line to earn his seventh. Brannen said with the shot making ability of Wright State, it makes game planning for Love a lot more difficult.

Parker Ernsthausen and Jaylon Hall finished with 10 points each. The Norse did hold Grant Benzinger to nine points after he score 31 in the matchup earlier this season.

Tyler Sharpe finished with 16 points, with 14 points coming in the first half. He finished 5-13 from the field and 3-9 from three.

“It was great. He was phenomenal,” Brannen said. “I just need to get it to where he does it for the entire game.”

Drew McDonald had another difficult night against the Raiders, shooting 4-13 and scoring twelve points. He did chase down 12 rebounds for his 14th double-double of the season.

NKU shot just over 41 percent on the night while the Raiders shot 49 percent for the game. The Raiders held a 38-30 advantage in points in the paint. The Norse did outrebound the Raiders 37-27 in the game and collected 14 offensive rebounds for 16 second chance points.

With the Norse down nine with 5:13 remaining, Sharpe and Benzinger dove after a loose ball. Sharpe, while still sliding, was able to start his dribble, return to his feet and score a contested layup. McDonald followed with three to cut the lead to 63-60, which ignited the NKU faithful who made the drive up to Wright State.

A Holland layup cut the lead to two, but Wright State was able to put together back-to-back baskets to gain a 66-62 lead with just over two minutes remaining. A Jordan Garnett three cut the lead to one with 1:19 remaining, and after a Cole Gentry missed three, the Norse had a chance to take the lead with a minute remaining. McDonald, however, was called for a travel with 40 seconds remaining trying to drive to the basket.

“The ref called a travel. I didn’t think I traveled but he called it,” McDonald said. “I knew if I could get to the rim, maybe draw a foul, get a shot up… You have to go with what the ref says.”

The turnover led to a Hall floater that gave Wright State a three point lead. The Raiders fouled Holland on the next possession with two seconds left and he made two free throws, even though he was trying to miss the second free throw for the chance at an offensive rebound.

It was a slow start to the first half for both teams, as the two teams combined to score three baskets in the opening five minutes. The Raiders were able to build a seven point lead near the half way point in the first half.

The Norse would come back, however, thanks to Sharpe, who had 14 first half points. Sharpe hit three free throws with 4:29 remaining to give NKU a 22-21 lead. From their, NKU built a five point lead, but was unable to hold it as Wright State would take a 32-30 lead into halftime.

Foul trouble dogged the Norse all night, as Jalen Tate and Holland picked up three fouls in the first half and Garnett picked up two, making it difficult to effectively guard the Raiders.

“Lavone became very timid,” Brannen said. “Understandably because he had three fouls. They are a difficult team to zone and we aren’t really a zone team. We man.”

The Norse will play again on Monday night when they welcome Youngstown State into BB&T Arena. It will be senior night for NKU; Holland, Garnett and Nick Ayers will be honored pregame. Tip-off is scheduled for 7:30.

“Those seniors have done things that nobody else in college basketball has ever done with the successes they’ve had in a short amount of time.”