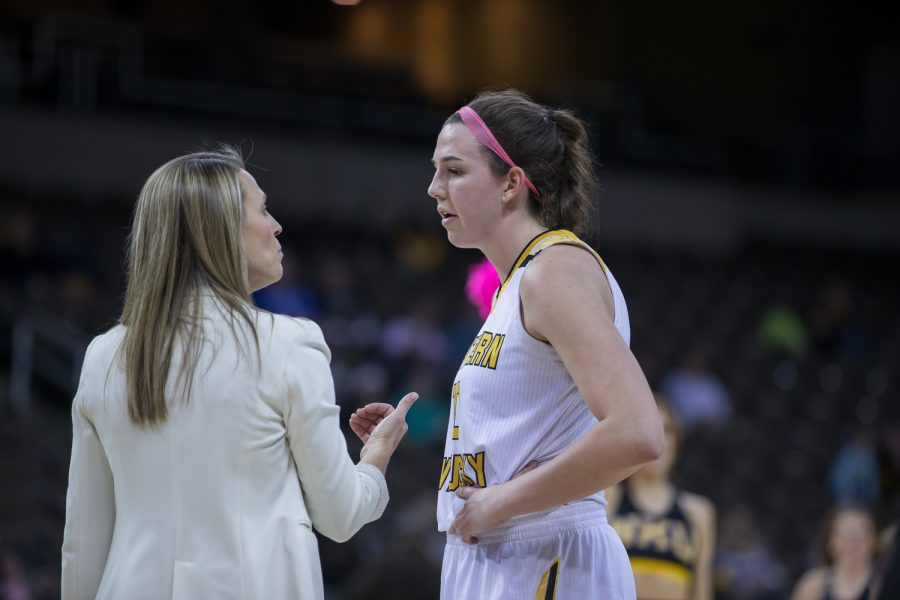 Head Coach Camryn Whitaker talks to Grayson Rose (10) during a timeout in the game against Oakland.

The Northern Kentucky University women’s basketball team defeated Oakland 66-59 Thursday evening in BB&T Arena. The Norse improve to 7-17 and 5-8 in the Horizon League while Oakland falls to 11-12 and 4-8 in conference play.

“Oakland beat us by 23 points last game,” NKU head coach Camryn Whitaker said. “We are a different team now than we were then.”

Oakland has now lost six of their last seven games while the Norse are now on a two game win streak and are now seventh in the Horizon League standings, ahead of Oakland.

Molly Glick scored 19 points to lead all scorers. This is the eighth straight game Glick has scored double digits.

“All of my teammates, they drive in, they draw the defense and they just find me on the perimeter. So it’s all them,” Glick said.

Samari Mowbray and Taryn Taugher finished with 10 points for the Norse. Every NKU player who entered the game scored.

“We never know who is going to be on,” Glick said. “It’s a different person every night so having the bench points come in, having all the freshman step up is really big for our team.”

Both teams shot just over 40 percent for the night and 40 percent from three. NKU was 19-24 from the free throw line while Oakland was just 7-11.

The Norse started the game 1-5 from the field and turned the ball over five times. The Norse made just three baskets in the first quarter and had eight turnovers while the Grizzlies shot just over 43 percent.

“In the huddle we talked about having a good attitude,” Whitaker said. “This is a game and there are going to be some mistakes made… it was a matter of us being more intense on defense. Our defense got our offense going.”

NKU came roaring back at the end of the second quarter, going on an 11-0 run to end the half. Oakland turned the ball over 12 times in the quarter and allowed the Norse to tie the game at 26 before halftime.

The Norse were able to take the lead in the third quarter, shooting 33 percent and scoring 16 points while holding the Grizzlies to nine. Oakland shot just 15 percent in the quarter.

After sustaining a run from the Grizzlies that cut the lead to 46-41, the Norse extended their lead back to 10 points with just over six minutes remaining and led by as many as 13 in the quarter. The Panthers would stay within 10 points the rest of the way, but could not complete a comeback.

The Norse will take on Detroit Mercy at 1 p.m. on Saturday, the first of two NKU basketball games on homecoming Saturday. Detroit Mercy is third best in the league in threes per game.

“Detroit is a scary team because they shoot the three very well,” Whitaker said. “When we played them at their place we weren’t good defensively. We know we are going to have to defend the three point line and that’s been a struggle of ours.”

The game will be available on ESPN3.