Norse escape with a victory over Milwaukee 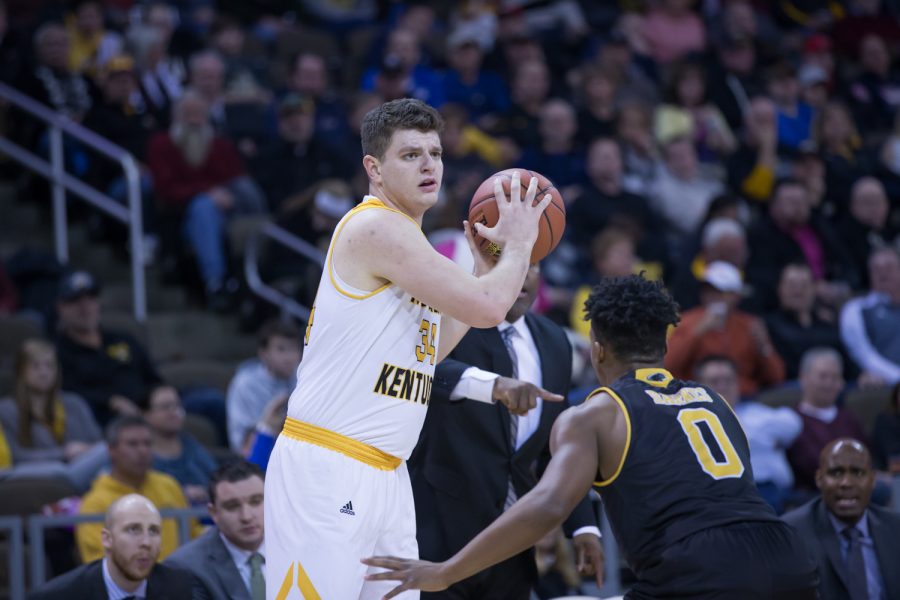 Drew McDonald (34) looks for a teammate to pass to in the game against Milwaukee.

Since NKU joined the Horizon League, Milwaukee has landed on the schedule during homecoming. Each time Milwaukee has played hard but failed to defeat the Norse.

Tonight played out much the same way.

NKU defeated the Panthers 54-52 in BB&T Arena Thursday night, improving to 11-2 in conference play and 18-7 overall. Milwaukee falls to 13-14 and 6-8 in Horizon League play. Wright State defeated Green Bay, which means the Norse and Raiders are still tied at the top of the Horizon League.

It came down to the final seconds, when Jeremiah Bell tried to take on Tyler Sharpe one-on-one. When Sharpe wouldn’t allow Bell to go baseline, the Milwaukee guard shot a three with five seconds remaining that rimmed out. Drew McDonald blocked a shot off the rebound as time expired to secure the victory.

“What he did on that last possession won us the game,” McDonald said. “At this level, guarding anyone one-on-one is tough. Jeremiah is a really good basketball player so the way Tyler could sit down and keep him in front and make him take a real tough shot just speaks to what he does everyday in practice.”

The defensive stand capped off a night where Sharpe made his first career start over Jalen Tate, the first time head coach John Brannen has tinkered with his starting lineup.

“It felt good,” Sharpe said. “Preparation and hard working paying off. It’s just like any other game. I knew I had to come in and bring energy, play hard and help my team win. It doesn’t really matter to me starting or coming off the bench, I just take my opportunity and play hard.”

McDonald battled through foul trouble and double teams to record his 12th double double of the season, scoring 16 points and grabbing 10 rebounds. Sharpe finished with 12 points and was 3-6 from three. Lavone Holland II, Carson Williams and Dantez Walton all finished with six points.

Milwaukee’s slower style of play hampered the Norse offense, shooting just 41 percent on the night and just over 28 percent from three. The Norse had good looks at the basket throughout the night that did not drop through the net.

“I thought they came in here with a purpose,” Brannen said. “They were prepared for what we did and they tried to make it a possession game.”

The Norse fell behind 10-5 early on in the first half, but battled back in the first half to take a 27-24 lead into halftime. NKU shot 44 percent in the half while Milwaukee shot 37 percent.

The beginning of the second half saw the lead change hands several times and Milwaukee led by as many as four with just over 14 minutes remaining. The Norse would recover, taking a seven point lead after a McDonald jumper and two Sharpe threes with six minutes remaining.

Just as it seemed the Norse would pull away, Brock Stull hit a three with over four minutes remaining to cut the lead to five. Milwaukee would chip away until the final minutes but came up short.

NKU will take the floor again on Saturday to face Green Bay at 7 p.m.. The game will be available on the CW Cincinnati and can be heard on Fox Sports 1360 AM. The homecoming king and queen will be announced at halftime.