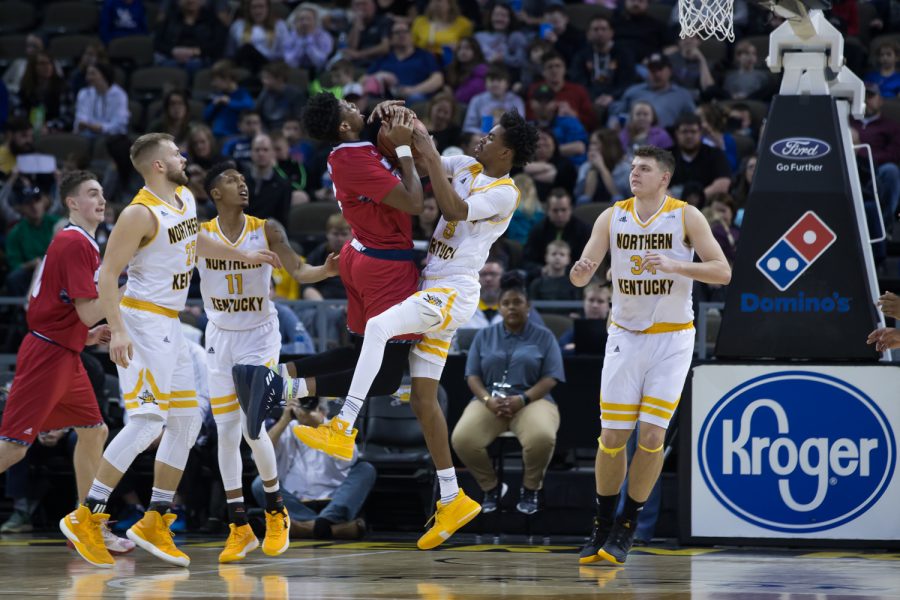 Jalen Tate (5) fights for a loose ball in the game against Detroit.

The Norse had a rough start to the game with three consecutive turnovers in their first three possessions of play. After those mistakes, the Norse came back with great defense and held Detroit to 1-10 shooting from three in the first half.

NKU shot 45 percent from the field and shared the ball well, dishing out 19 assists. The Norse also outrebounded Detroit by nearly 20 rebounds. In addition, 10 different players were able to score for the team.

Detroit had two players that were injured in the first half which put them back. Their point guard, Jermaine Jackson Jr. was hurt within the first 30 seconds of play.

Drew McDonald had a double-double with 12 points and 13 rebounds. He made 5-7 from the field. Carson William had 13 points and nine rebounds. Tyler Sharpe played very well off the bench with 10 points. Chris Vogt sealed the deal with a huge dunk to finish out the game.

Head coach John Brannen was proud of the effort that his team put into the game, but understands that they still have some time to go.

“Really proud of our men they come out and compete on such a short turnaround,” Brannen said. “They didn’t get out of here until 11:30 p.m. on Friday night. We didn’t play our best basketball but I am okay with that because right now we need to be ascending to be playing towards our best basketball. We are in a competitive league. We have to bring it every night. When things aren’t going well for you, fight through everything.”

The Norse are on the road next week in Ohio for two important conference games against Youngstown State and Cleveland State. Then, they are back at the BB&T Arena for Homecoming weekend on February 8th.