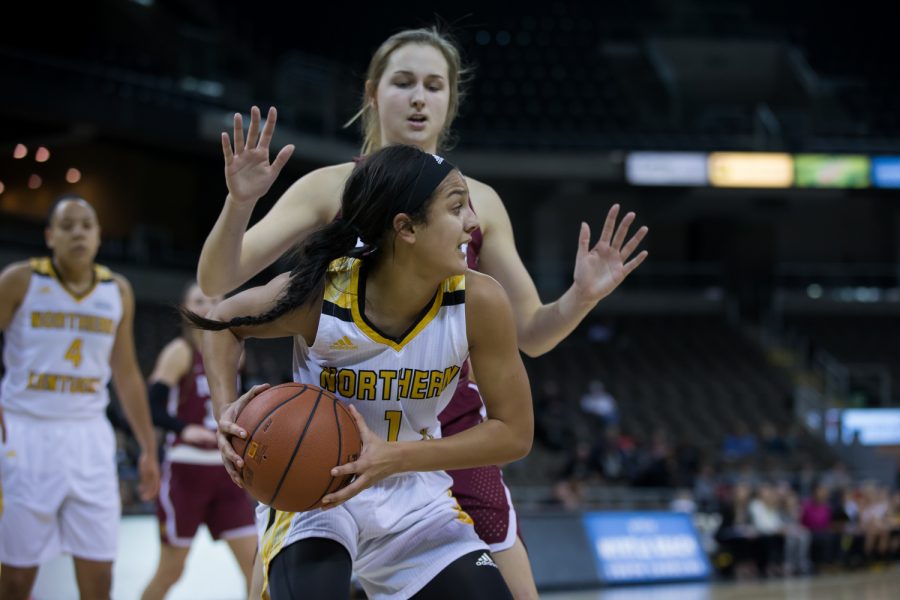 Grace White (1) looks to shoot in the game against IUPUI.

Sophomore guard Molly Glick delivered a layup after a steal with eight seconds remaining in the game to help send the Northern Kentucky University (5-14, 3-5 Horizon) women’s basketball team to a thrilling 61-53 overtime victory over the University of Illinois-Chicago (7-12, 0-8 Horizon) on Sunday afternoon at BB&T Arena.

“I felt like I played the game,” said head coach Camryn Whitaker. “I’m just proud of our effort and it was a great comeback.”

After trailing by as many as 17 points in the fourth quarter and down 50-48 with only 27 seconds remaining, Taryn Taugher knocked down a pair of free throws to send the game into overtime. In the extra period, the Norse took advantage of two turnovers and put together a pair of layups to secure the win for the home team.

“I’m very proud of my team,” said freshman forward Kailey Coffey. “I really like that my teammates put up a fight and even when we’re down, we just keep fighting.

Coffey went 5-of-12 from the field and 9-of-14 from the charity stripe to garner 19 points. The forward accumulated 12 rebounds and scored 14 of her points in the fourth quarter and overtime. Mikayla Terry contributed 16 points and three steals while Glick added 13 points and a season-best, four steals.

“It would have been easy to fold and quit,” said Whitaker. “We just got could kids that play hard, they play for each other and they’re unselfish.”

Terry’s nine point first quarter performance gave the Norse an early lead over the Flames, 15-13. However, UIC kept the Norse’s offense relatively silent for nearly the first seven minutes of the second quarter after going on a 9-0 run. After a Brittany Byrd three from the right side of the arc, the Flames would head to the locker room ahead of the Norse, 25-18.

The Norse would remain scoreless after the Flames forced turnovers, fought for defensive rebounds and opened the third quarter on a 10-0 run. Byrd would help the Flames extend the lead to as much as 19, until Jazmyne Geist nailed a buzzer beater to cut the lead down to 43-26 heading into the final 10 minutes of play.

The Norse would use this spark to open the fourth quarter on a 14-3 run to cut the deficit down to six, 46-40, with 2:15 seconds left to play. A trip to the charity stripe for Catera Etheridge gave the Flames a four-point buffer with 30 seconds left, but the Norse were able to knot the game at 50 after four straight free-throws to send the game to overtime.

“I told them to figure it out,” said Whitaker. “They decided that they wanted to play and I think it was a big growth point for our team.”

Tied at 51, Coffey gave the Norse a 53-51 lead after a simple bounce pass to layup with three minutes remaining in overtime. Abreanna Lake would knot the game at 53 for the Flames, but a pair of layups and points off of turnovers by the Norse, sealed the comeback victory.

“Sometimes we start slow and that’s one thing we struggle with,” said Glick. “We started overtime getting scores and stops and that’s what brought us back.”

“You have to have a short memory in this game,” said Whitaker. “If you make a mistake, you got to bounce back from it, let it go and move onto the next play.”

The Norse look to build off of this momentum when they travel to Youngstown State (7-12, 3-5 Horizon) on Thursday, Jan. 25. Tip-off is scheduled for 7 p.m. and will be broadcast on ESPN3.